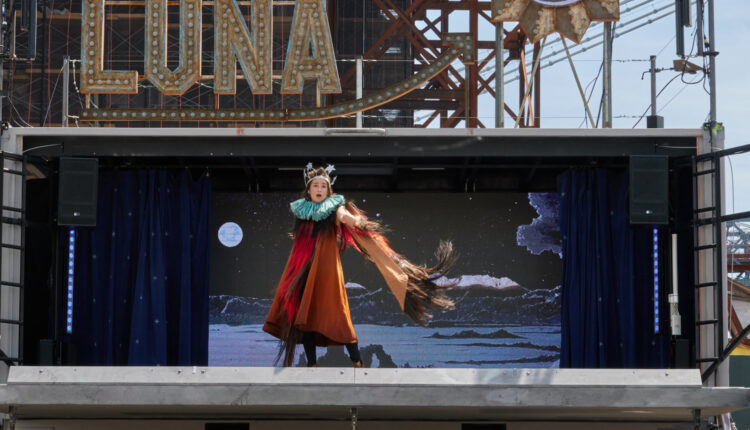 Birds in the Moon explores issues such as freedom, migration and borders, and when the pandemic suddenly restricted all freedom of movement, the opera’s message got even stronger.

Now, a year and a half after the lights went out on Broad Stage, this traveling, whimsical open-air opera will triumphantly celebrate the return of the theater’s live performances. In a parking lot in downtown Santa Monica, Birds in the Moon is performed in a decorated shipping container with an LED screen, light and sound system, and a rooftop performance room.

Composed by Mark Gray and Júlia Canosa i Serra, the opera tells a fantastic story inspired by a 17th century theory that birds would migrate to the moon in winter.

It shows Maria Elena Altany as the mother bird who meets Austin Spangler as a ringmaster and the two try to escape the dangers of the desert because they believe that the moon is the answer to their need. The story is told with music from the San Francisco-based string quartet Friction, alongside soundscapes and video projections.

After many months without live performances, the open-air opera offers an invigorating and at the same time cathartic experience for viewers and performers.

“Being home after a year and a half, standing up there in the wind and sun and singing to the sky is incredibly exhilarating,” said Altany.

The show ran in New York City that spring in a pop-up style, with the audience not changed beforehand to avoid mass formation. The Santa Monica Show will mark the West Coast premiere of Birds in the Moon and the cast will perform for the first time in front of a ticketed audience.

“The play is so much about drought, water and migration that it will be such a nice juxtaposition to be able to see the sea from the stage,” said Altany.

Set designer Chad Owens designed the portable theater with the idea that any location could become an active part of the setting. Exposed to the elements and with minimalist props, the “magic box” opens up to the possibilities of nature and chance.

During one performance, Owens recounts that a giant night heron circled the crowd, then was bombed by a hawk, settled right next to the theater, and watched the rest of the show.

“It was this incredible visit from bird characters that came in and almost stole the show,” Owens said. “There’s this aspect of magic, that when you’re out in the elements, things can happen that you have no control over.”

The show itself is woven with elements of magical realism. It was written by the composers Mark Gray and Júlia Canosa i Serra, who are known for their full-length opera Frankenstein.

The two wanted to develop a small opera ensemble that touched a social and political issue. When they originally wrote the story, the Syrian refugee crisis was getting a lot of news, and the two thought about migration, human trafficking and the situation on the US-Mexico border.

The show examines these issues with a mythical lens to portray the timeless struggles people endure towards a better life.

Altana, who plays the courageous, self-sacrificing mother bird who does everything to protect the future of her children, always keeps an eye on the real stories of the migrants during her performances.

“As a mother herself, the thought of being separated from your child and not knowing when to get it back is unimaginable,” said Altany. “This show is a myth and a universal story, but it’s also happening here in California on our borders, beyond our borders, in our cities and in spaces that are right next to us, but we don’t know. For me this is the most meaningful part of our show. “

Birds in the Moon will be performed from September 1st to 4th at 7pm at Lot 27 in Santa Monica. Tickets can be purchased at www.thebroadstage.org.

Back to school amid the surge in COVID: 3 things you should know