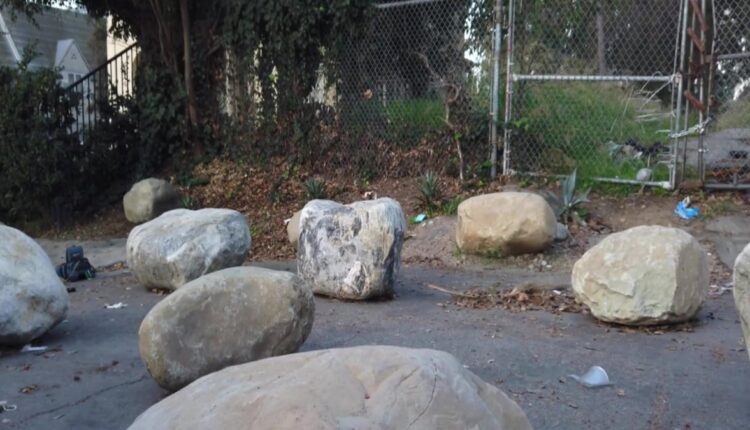 Jae Soon Bae remembers the afternoon the boulders showed up in his Koreatown neighborhood.

About a dozen of the big rocks were placed at the site of what had been a homeless encampment in the community west of downtown Los Angeles.

He didn’t recognize the man who brought them, but they arrived in a large truck, he said. They form an imposing barrier at a long-closed entrance to the Shatto Recreation Center on the residential block of Westmoreland Avenue.

Neighbors told NBCLA they’ve prevented people from setting up tents at the location. Neighbors said the first few tents of the encampment showed up about two years ago.

The boulders seem to have been placed strategically by the back entrance of the park, where residents described instances of open drug use, fires and even explosions. One resident said he witnessed a naked man standing in the street and screaming.

“Ever since we moved here, there’s been some sort of issue with that,” said resident John Lee, who has lived in the area for decades.

Boulders can be seen blocking pedestrians right-of-way on the sidewalk.

Lee tried a different approach in response to the encampments. He planted thorny cactus plants in the grassy area next to his home.

But the rocks are next-level effective, neighbors said. They appeared shortly after the city cleaned up an encampment.

No tents have re-appeared since.

NBCLA reached out to the city and mayor’s office for comment, but had yet to receive a response.

Ktown for All co-founder Michael Dickerson told Street’s Blog LA that the encampments and rocks are nothing new to Koreatown.

“Frequently, following sweeps, we’ll see new barriers put up to prevent people from returning to the location where they were camping,” Dickerson said. “In K-Town, we’ve seen local businesses use construction fences and planters to block off public spaces.”

Dickerson told Streets Blog the rocks and planters are not often authorized by city officers and private individuals take matters into their own hands.

“The end result is that public spaces are made unusable by anyone, and unhoused people are forced to move along to a new location,” said Dickerson.

Anti-camping laws were recently updated by the LA City Council, allowing for more sweeps in areas designated by the local city council member. Within those council-designated special zones, the city can enforce Section 41.18 of the Los Angeles Municipal Code. This code makes it illegal to “sit, lie or sleep in or upon any street, sidewalk or other public way.”

Council member Mike Bonin was not a fan of the city’s increased anti-camp push and criticized it.

“No person shall… allow items to remain in the public right-of-way,” said Bonin. ““items placed in the enforcement zone will be removed by the city.”