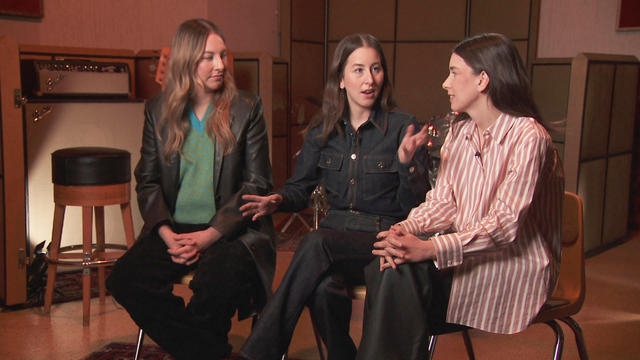 In her very first acting role, Alana Haim gets a lot of attention. The Hollywood Reporter called her performance in Paul Thomas Anderson’s Licorice Pizza “one of the most exciting screen debuts in recent memory.”

In her very first acting role, Alana Haim gets a lot of attention. The Hollywood Reporter called her role in Paul Thomas Anderson’s Licorice Pizza “one of the most exciting screen debuts in recent memory.”

“Oh thank you!” Alana Haim laughed. “It’s crazy. I don’t really know how to take it.”

The director wrote the role for 30-year-old Haim. But it wasn’t their first collaboration: “I’m lucky enough to have done so many music videos with Paul that we had such incredible trust,” she said.

With her older sisters, Danielle and Este, Alana is in the Grammy-nominated band HAIM. Anderson has directed eight of her videos, including this one for her song “Summer Girl”:

Anderson also cast Alana’s sisters and parents as her family in the film. A scene where Alana takes her atheist friend to Shabbat dinner is taken from real life. Alana said: “I remember telling Paul that story. And then it was in the script!”

“You knew how to play that scene,” Mason said.

Alana: “Why would you do that! Why would you do that! I have a feeling that maybe he would become my friend.”
Father: “Listen, young lady, you’re not bringing this idiot here to Shabbat dinner.”
Alana: “Listen Dad, he’s an atheist and an actor. And he’s famous.”
Father: “But he’s Jewish.”
Alana: “He wanted to get me out of here. Este, don’t even look at me. don’t you even look at me You always look at me!”

Mason asked the Haim sisters, “Did you enjoy doing a movie?”

Filming reunited the normally inseparable sisters who had been separated by COVID. “They’re all not used to not seeing each other,” Mason said.

“No!” they answered unanimously. 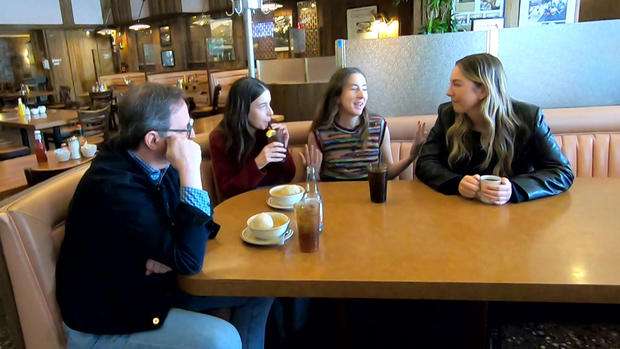 Canter’s Deli in Los Angeles has been the family hangout for years. “I can’t remember when we didn’t come here,” Este said.

You’re behind the counter at Canter’s on the cover of their latest album, Women in Music, Pt. III,” which was nominated for a Grammy for Album of the Year. 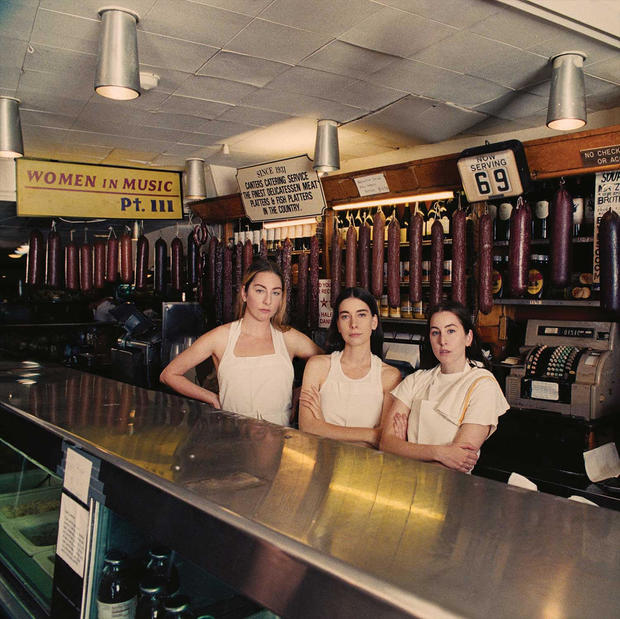 And with their parents they made their musical debut here as children in the family band Rockinhaim.

Mason asked, “Who was there in the crowd?”

Alana said, “We were so nervous even though nobody was here.”

They were paid with matzoh ball soup, which is still very popular. And while they each played with other bands for a time, they soon realized, as Alana said, “Nothing beats playing with our family.”

Alana said, “On our first show, right after we were signed, I walked out the door and there was a line of people and I said to the first person, ‘What’s this line for?’ And they say, ‘To see you?’”

Their debut album Days Are Gone peaked at #1 in the UK and #6 in the US and caught the ear of Anderson, the director of Boogie Nights, Magnolia and Punch Drunk Love. ’, who unknowingly already had a connection to the Haim sisters through her mother:

“She was an art teacher,” Danielle said.

“And he was actually your student?” asked Maurer.

“Yes, when he was about eight years old,” Danielle said. “But every time one of his movies came on TV, growing up, my mom would say, ‘You know, I tutored the director of that movie.’ And we say, ‘Really?’ “Yes, I taught him when he was eight years old. I drew with him with my fingers.’ We’re like, ‘Okay, Mom.’”

Then they finally met through a mutual friend: “And he was like, ‘You guys are Miss Rose’s kids?'” Alana laughed. “And we said, ‘Oh God!’ He brought out a painting. And he said, “I drew that with your mother and I’ve kept it all these years.”

“And then we, like, Facetimed Mom,” Este said. “It was like a reunion. It just felt very familiar.”

Alana said, “This amazing friendship has only just begun, and now we refuse to let him go!”

When the sisters were making their second album, Anderson was filming a short film at Valentine Recording Studios… when Mason was meeting with the Haim sisters.

Alana said: “Even being in this room brings back so many memories. And it really was the first time we saw anything that felt, looked and sounded like us.”

Mason asked, “How would you describe this relationship artistically?”

“Lots of faith,” Este replied. “We trust him completely.”

It all led to Haim’s big moment in Licorice Pizza and Alana’s starring role.

Mason asked, “Finally, how do you feel about what happened to her?”

“How do we feel about what happened to her?” said Este. “Like the fact that our littlest sister is that jewel of the screen? That star? I always knew it was in you! You know, and I think you can see it in the music videos too, like, Alana’s always been like, shiny…” 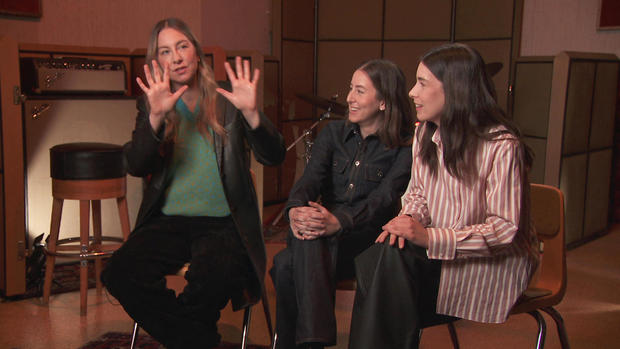 “No, I wanted to say that, like a shining beacon. You really can’t take your eyes off Alana.”

“It’s also weird getting compliments from your siblings. It feels weird,” Alana said.

To watch a trailer of Licorice Pizza, click on the video player below:

You can download HAIM album “Women in Music Pt. III” by clicking the embed below (free Spotify registration required to hear tracks in full):