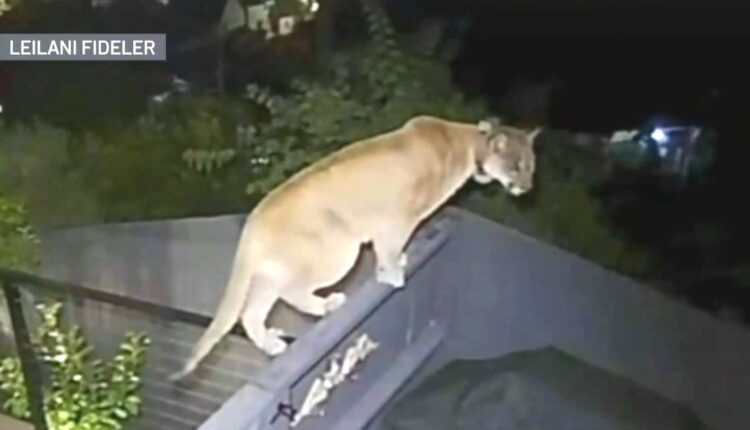 The video from a surveillance camera captured the likely famous Southern California mountain lion P22 while visiting the neighborhood at night.

The agile big cat jumps on a fence and crouches there like a gymnast on a balance beam.

The local resident who posted the video said it was taped Tuesday night. The neighborhood is bordered by Los Angeles’ sprawling Griffith Park, where the P22 mountain lion is known to roam.

And this wouldn’t be P22’s first visit to adjacent neighborhoods.

The mountain appears to be wearing a tracking collar. The National Park Service is tracking mountain lions to study how they survive in urbanized landscapes. The GPS radio collars provide researchers with detailed information about the mysterious big cats.

Los Angeles and Mumbai are the only two megacities in the world where big cats live within city limits, according to the NPS.

There are roughly 4,000 to 6,000 mountain lions in California, but wildlife officials call this a rough estimate with no ongoing statewide study. More than half of the state is considered the main habitat for the big cats, which can be found anywhere deer are found.

The California Department of Fish and Wildlife receives hundreds of reports of mountain lion sightings each year. Few result in mountain lions being identified as an immediate threat to public safety, the ministry said. Attacks by mountain lions on humans are extremely rare and their nature is to avoid humans.

Here is a full list of recommendations from the California Department of Fish and Wildlife on what to do during a Mountain Lion encounter:

ADU is turning a Santa Monica backyard into a WFH retreat