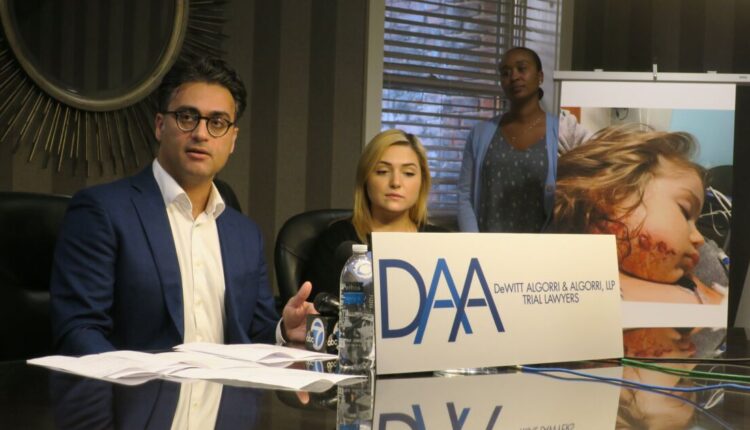 The mother of a 2-year-old girl who was begging by a coyote in Huntington Beach in April announced plans Thursday to sue the city.

A claim filed by Bree Anne Lee Thacker alleges negligence by the city led to the injuries her child suffered April 28.

She and her daughters — ages 2 and 3 — had traveled to Huntington Beach from their home in Chino Hills and were walking on the beach near the pier about 9:45 pm The younger girl was a few steps away from her mother when a coyote knocked her down and bit her face.

“Frankly, she is lucky to be alive at all,” Thacker’s attorney, Sam Soleimany, said during a news conference in Pasadena. “Had this bite been just a few inches [lower]we’d be talking about a completely different type of case.”

A photo shows the extent of damage to the face of a 2-year-old girl who was attacked April 28 by a coyote in Huntington Beach.

Since then, scars have formed on the child’s face. She now panics at the sight of most dogs, including a family pet she had once been very attached to, Soleimany said.

At the time of the attack, city officials had approved a coyote management plan outlining a course of action to deter interactions between the wild animals and humans. The version viewable on the city’s website includes instructions to create volunteer hazings teams to scare away coyotes that may have been frequenting human-inhabited areas.

“Why were no hazing teams, apparently, in the city deterring coyotes to prevent this type of injury to a little girl?” Soleimany asked Thursday.

City officials said the recommendation to form hazing teams was the result of comments made by residents during a town hall meeting after the girl was asking.

“The city’s coyote management plan is intended to be a living document that is regularly updated to reflect the newest best management practices relating to coyotes,” Huntington Beach spokeswoman Jennifer Carey said.

Huntington Beach officials have not yet responded to the claim, which was filed Aug. 31 by Thacker. If they reject it, she plans to file a suit seeking damages from the city, Soleimany said.