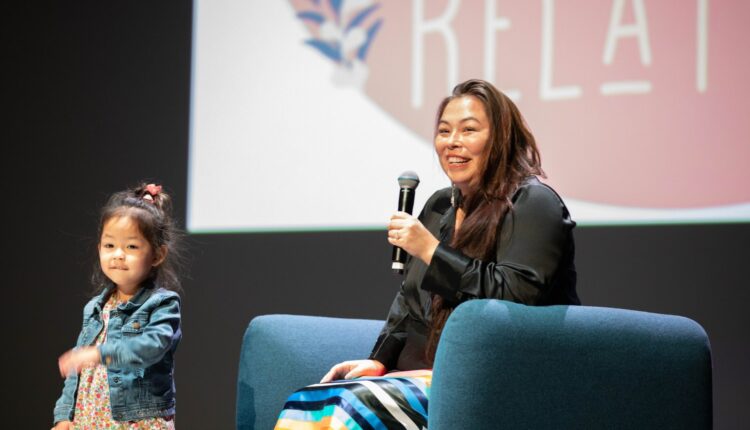 Santa Monica College (SMC) hosted Artist in Residence Matika Wilbur for a live showing of the fourth season of the “All My Relations” podcast and accompanying film festival on Friday, Nov. 18, and Saturday, Nov. 19. The podcast recording was held at the SMC Center of Media and Design from 10:30 am to 2 pm, while the first-time film festival was held at the John Adams Middle School Performing Arts Center from 5 pm to 9:30 pm

Wilbur, who is of the Swinomish and Tulalip tribes, hosted two different episodes of the podcast with various Indigenous creatives together with co-host Dr. Adrienne Keene, a Cherokee Nation academic researcher. Art Department professors Walter Meyer and Emily Silver were spotted in the crowds as they admired the collaborative efforts of the art department and Wilbur.

The first recorded episode, “The Borders Crossed Us – Part 2,” guest-starred Jon Ayon, from the Comáac and Pipil tribes. They spoke about the struggles of many Mexican and Indigenous immigrants face of displacement, separation and government restrictions, despite it being their native country. The episode concluded with a brief talk and introduction to Ayon’s short film, “No Soy Óscar.”

The film follows the story of a Salvadoran-American father visiting the US-Mexico border to find where a Salvadoran immigrant and his daughter drowned. Despite the heavy topic, many audience members resonated and connected with Ayon’s story.

The second episode guest-starred Tazbah Chavez of the Bishop Paiute tribe, Jana Schmieding of the Lakota tribe, and Sierra Teller Ornelas of the Navajo tribe. The light-hearted episode, titled “Native Women Are Funny,” followed the experiences of all three guests as Native women in the entertainment industry and the importance of building a community on an audience and writer level.

Schmieding urged Indigenous students who aspire to work in the film industry to find groups to connect with.

“I think people should find their local resource,” she said. “I found a lot of community in college working with the Native Student Union.”

Many students present, from SMC and other colleges, showed up in support. Marissa Irizary, from the Fort Peck Assiniboine reservation in Montana, said, “For most people in my life when we get together all we do is just laugh and laugh and laugh and just joke around. And I think that humor is really healing and really sacred and that laughter is just what keeps us going.”

“I think the diversity of other Indigenous people from other people’s perspectives is important … to see other cultures are important and valid and relatable,” Irizary said.

Audience members can expect to listen to all episodes of the podcast very soon. Keene promoted their website and Instagram, and said season four would be released soon.

The Saturday podcast premiere began with an introduction of the hosts. The first section centered on the short film “Daughter of a Lost Bird,” a film piece based on the real story of Kendra Mylnechuck’s first reunion with her Native birth mother April. The story was told by director Brooke Pepion Swaney, together with Mylnechuck herself.

The emotional recording—while humorous—brought attention to the Indian Adoption Project’s ongoing effects on the Indigenous community.

The Film Festival proceeded with an interview with Award-winning writer Brit Hensel from Oklahoma, director of the movie “What They’Ve Been Taught.”

Hensel shared her knowledge of filmmaking in a way that respects the individuals and the communities they represent on film, emphasizing the value of indigenous sovereignty and ownership of one’s own body both in physical life and in film. Wilbur and Hensel discussed how in western culture if you’re behind the camera and press the shutter, the photo belongs to you. In the indigenous community, they said it is considerably a much more complex situation.

And as the night was wrapping up, the applause was roaring as the show concluded with a Q&A with Reservation Dogs showrunner Sterlin Harjo together with writer and director Ryan Redcorn announcing the show’s renewal for its third season.

A group of SMC students worked on the campaign for the Matika Wilbur gallery showing over the spring and summer of 2022.

Karen Willert, an SMC Art History major looking to transfer to UCLA, reflected on her involvement with the film festival.

“I can bring this experience with me in my upper divisions,” she said. Willert was one of the students who worked on developing banners for the school as well as communicating and promoting the showing on social media.

On her contribution to the exhibit in October, she noted how fantastic it had been to work on it. She also expressed a tremendous amount of gratitude for the opportunity to have worked with other students from the Art department.

Willert attributes her experience working with Wilbur to making her feel more at ease being one of the older students.

“As an older student my job is not to be invisible, and watching Matika—she is unapologetic about who she is,” she said. “As a human, she’s just bigger than life.”

This Blockbuster Pop-Up Bar In Los Angeles Is Nostalgic AF