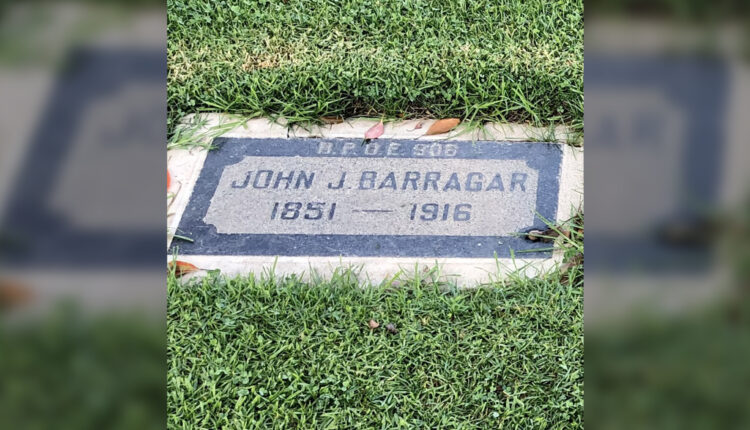 Three generations before we moved from Beverly Hills to Ocean Park on New Year’s Day 1986 – a smart move after my book – she had a family history here that went back to her grandmother and great-grandfather, John Barragar. He moved his family from Colorado Springs to Los Angeles in 1903, but was not so in love with LA when a friend suggested he go west to the ocean. In 1905 he followed this advice and viola, another early convert to Bay City.

Barragar rolled down the Rocky Mountains to the coast with his wife Mary Elizabeth (not related, but interesting: she was a seamstress for Thomas Edison, then in Colorado) and their four children. He was a respected interior designer and a painter, a construction painter. Family history believes he worked on the massive Mineral Palace in Pueblo, CO, but he definitely helped complete the spectacular Mormon Temple in Salt Lake City, the Latter-day Saint Church’s equivalent in the Vatican.

AT WOODLAWN. TO BURY

Back then, people mixed paint by hand with wooden stirrers without being aware of the lead content and its toxic effects. Barragar, born in 1851, died in Santa Monica in 1916 at the age of 65 from what was described in the newspaper’s obituary as “severe indigestion” (??). He is buried here in Woodlawn Cemetery (between Lee Marvin – no, not this one – and Rudy Gay Love), in the section reserved for members of the Elks, local BPOE 906 still active at 1040 Pico. but Barragar probably attended meetings in the older building on Main Street. We gave the current managers of Elks Lodge his old membership card and they seemed delighted. The receipt for his burial place in Woodlawn shows a fee of US $ 30.25 for the “eternal care on grave 179, Elksruhe” plus “work” of US $ 12.50 and “box” of US $ 7 . I wish I could get a parking ticket this cheap in Santa Monica.

His second son, Ed, served in the Santa Monica Fire Department in his twenties. He died of tuberculosis in his mid-30s in 1932. We had a family photo of him and his fellow SMFD firefighters, all in fancy uniforms from the period around the 1920s, that we donated to the Santa Monica History Museum in our main library building on 7th Street. Ed graduated from Samohi and we also donated his diploma in a pigskin jacket and signed by Rector William F. Barnum (yes, that) to the museum after we took a photo of it for her archives by longtime dean of Samohi Catherine Baxter let. So at least a little bit remains of our historic grammar school. In the museum. Where it will not be devalued and demolished.

Not really. She was a good Catholic girl. But Dian’s grandmother, Mildred Michell, worked there as a young woman. She lived one block from our iconic long-time former main post office on 5th Street and walked to work. There is a “family famous” photo from the 1920s of Mildred posing in a bathing suit on the beach with the palisades as a dramatic backdrop and looking just like she does now. The palisades, not Mildred. (Though the top and bottom have changed dramatically.)

Her younger sister Pauline probably walked to work too. She was a WAC during World War II where she met her husband, and after the war they settled in her hometown, three blocks from our airport, on the Navy. Both worked in the aviation industry, at Clover Field, probably at North American Aviation.

Her older brother John became an electrician and worked on the notable lighting fixtures in the famous Bullocks Wilshire. We believe he attended Samohi too, but the two girls were sent to a private academy.

Decades later, Dian lived on the pier for three years before I met her and half a dozen years before we ended up where we are, just a few blocks from there.

One last connection from more recent times that only came about after we moved. Dian’s pastor when she was a child at Holy Trinity in San Pedro was … then father, now Monsignor Lloyd Torgerson. (He gave her and another 8th grade student the religion award, she wanted me to tell you.) We beat him a good five years before Santa Monica, but that’s okay, we made up our minds to let him in. A Pedran colleague, you know? . He’s been pastor at St. Monica’s here in Santa Monica for 25 years, and Dian has a sister named Monica.

For a third generation of San Pedran, Dian has quite a family history in Santa Monica. (Note: if you say pay-dro instead of pee-dro, you obviously aren’t from there.) Remember, more than a century ago there was a huge political money battle built over the port, and Pedro won over Santa Monica. (The port of Los Angeles is in San Pedro; Long Beach is a separate port.) Glad you won. I like our bay the way it is without half the planet’s shipping clogging it. And Pedro has always been a port city, that’s its tradition.

The two small towns remind me very much of each other. Besides, San Pedro mainly honors and preserves its rich history.

This is not a complete report, but I have a few things that I have observed.

Local architect and Ocean Park activist Bob Taylor (one of the founders of the Ocean Park Association neighborhood group, involved in redesigning Lincoln and Ocean Park Boulevards and our Carnegie Library, and part of a study group to revitalize Main Street in 1980), like me, campaigned for this “pilot project” is interested in closing part of Main Street to all vehicle traffic for a weekend. How does this affect the shops on Main Street and the surrounding residential areas?

Between the two of us – we didn’t work together, but exchanged notes – we found that almost every store we talked to was between 12 p.m. and 4 p.m. in the two-block closure zone the weekend before last and between 8 a.m. and 10 a.m. the first weekend said the shutdown, which was supposed to help the battered Main Street stores, had either no or a slightly negative effect. Only Toy Crazy said it was a big help. On the second weekend there were definitely more families with children. Very good music too.

Charles Andrews has lived in Santa Monica for 34 years and would not live anywhere else in the world. For real. Send love and / or rebuke to [email protected]