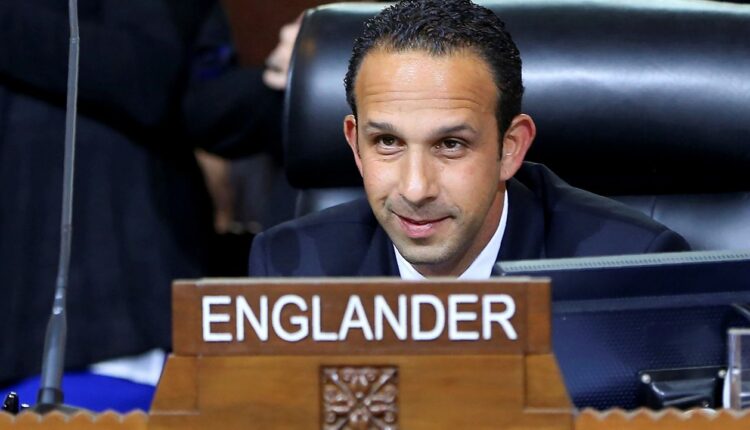 LOS ANGELES (CNS) — The Los Angeles Ethics Committee said on Thursday it had filed an indictment against former council member Mitchell Englander, saying his guilty plea in a City Hall corruption case showed he also violated the government’s ethics laws of Los Angeles violated by accepting gifts in excess of the gift limit and not reporting them properly while on the City Council.

what you need to know

Englander, who represented Council District 12 in the San Fernando Valley from July 2011 until he resigned three years ago, has already been sentenced to a year and two months for attempting to obstruct an investigation into allegations of bribery in city hall politics.

He surrendered in June to serve his sentence at the US prison in Tucson, Arizona, a maximum-security prison with an adjacent minimum-security satellite camp where Englander was believed to be held with about 90 other inmates. In October, he was transferred to a transitional home in Long Beach.

The Ethics Committee held a probable cause conference on Nov. 10, and a hearing officer determined that actions that Englander admitted in his guilty plea violated the Los Angeles government’s ethics laws.

Englander was served with an indictment from the Ethics Committee on December 27, accusing him of two counts of accepting excessive gifts, one count of abusing a position in the city and two counts of failing to disclose gifts. The Ethics Committee will next select a hearing officer for an administrative hearing. After a hearing, the Ethics Committee will determine whether the alleged violations have occurred and whether a penalty will be imposed. The Commission can fine Englander, if found guilty, with a maximum of $5,000 per violation, equal to three times the amount of money received or reported as inappropriate.

At Englander’s January 2021 hearing, U.S. District Judge John F. Walter said that “greed and arrogance” appeared to be the motivation for repeatedly lying to the FBI on three separate occasions and that Englander violated “the public’s trust in.” the government”.

The judge said the defendant appeared to have believed his position of trust would protect him from being caught and if he was charged “the consequences will not be significant”.

In a statement to the court, Englander admitted he had “damaged” his own reputation and said he didn’t quite understand what drove him to give false information to federal investigators.

Englander, of Santa Monica, admitted planning to cover up $15,000 in cash payments, sumptuous meals and other gifts he was offered by a businessman looking to improve his business opportunities in the city. He pleaded guilty to falsifying material facts, a federal charge carrying up to five years in prison.

Among his other duties, Englander served as Council President pro tempore and was a member of the powerful Planning and Land Use Administration Committee, which oversees many of the city’s largest commercial and residential development projects.

Englander was a “powerful and wealthy member of the Los Angeles City Council who swore an oath to serve the interests of his constituents,” prosecutors wrote. “He swore another oath as a reserve officer with the Los Angeles Police Department to uphold and protect the law. and behind hotel room doors.”

Prosecutors wrote ahead of Englander’s sentencing hearing that the defendant “cheaply and repeatedly sold out both oaths on numerous counts of escalating corruption and self-preservation converted his civil service into a lucrative private practice position as a government adviser with a major entertainment company.”

Two months after a 2017 Las Vegas trip with Englander and others, the businessman began collaborating with the FBI on an investigation focused on alleged pay-to-play schemes involving Los Angeles officials — including ex- Council member Jose Huizar – were involved, and made secret recordings of Englander’s interactions with him, federal prosecutors said.

Huizar, the central figure in City Hall’s six-year investigation, faces separate charges in a 41-count racketeering indictment alleging he took $1.5 million in bribes from property developers in exchange for his support of construction projects in accepted downtown.