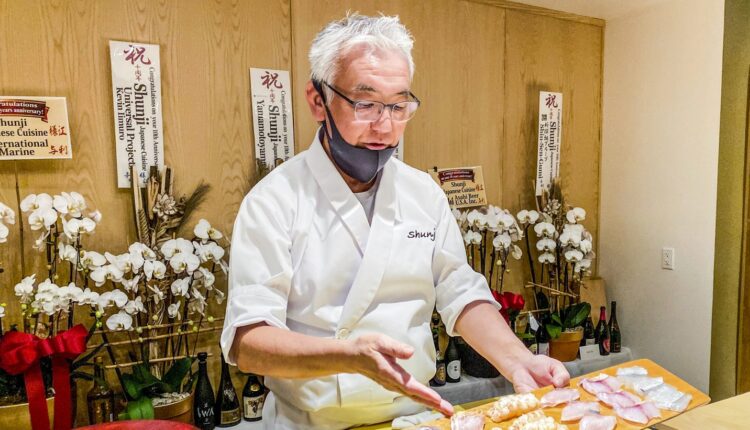 Los Angeles Times restaurant critic Bill Addison refers to Shunji Nakao as one of the quiet architects of LA’s sushi culture. Arriving in the city in 1984, he was one of the original chefs at Matsuhisa before leaving to open Asanebo in Studio City with his brother. In 2012, he opened Shunji on Sawtelle in the former space occupied by a defunct chain restaurant in the shape of a chili bowl. Nakao recently relocated the restaurant to Ocean Boulevard in Santa Monica.

Addison says the original Shunji was ambitious with omakase options, multiple price tiers, cooked à la carte options, and more tables. Hey says the relocation is understated in the best way — streamlined with two counters, the restaurant only has 14 seats. The offering is $250 per person for omakase with the only option being the beverage choice. More composed plates with striking compositions, Addison was taken by translucent, slippery baby eels topped with grated, mountain yam and shiso flowers. “There is so much sushi in Los Angeles now,” he says. “It’s as interesting to think about the rice as it is the fish. The rice at Shunji is less nutty and really satisfying against the beautiful array of fish served.”