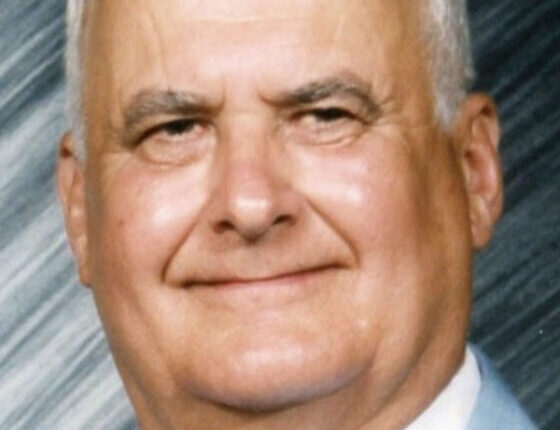 Mike graduated from Boardman High School. He joined the United States Marine Corps at the age of 17 and served in the First Marine Aircraft Wing from 1948 to 1952, leading to his deployment to Korea. While serving, Mike developed an affinity for Korean culture and returned four times later in life.

After the war, he enrolled at Youngstown State University and received a BS in electrical engineering.

Mike met the love of his life, a Danish au pair, Lis Pauli Petersen, in Mickey’s Bar in Boardman. They were married in November 1959 in Santa Monica, California.

Mike worked for over 30 years as an engineer in the aerospace industry, including at Douglas Aircraft Company in Santa Monica, California; Lockheed Missiles & Space Company in Sunnyvale, California; and United Technologies Corporation of San Jose, California, where he retired in 1992.

Mike loved coaching his sons’ baseball teams in the Little League. He volunteered in the San Jose Community, worked as an emergency medical service volunteer, and worked with Our City Forest to plant trees that beautified the streets of San Jose. He was a longtime parishioner of St. Martin of Tours Catholic Church in San Jose for over 60 years.

Mike was a man of conviction. He had a strong belief in God, was passionate about his country and veterans, and loved his family. He had a lively personality and was full of sarcasm and wit.

In lieu of flowers, please consider donating to the Korean War Veterans Association or Marine Corps League Detachment 1122 on his behalf.