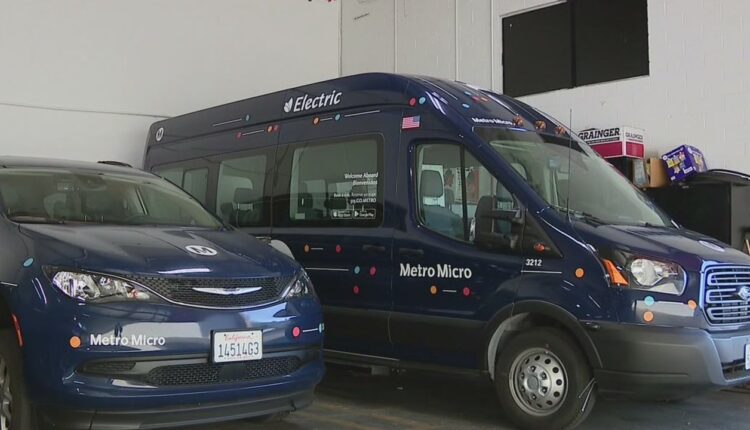 No, it’s not a typo. Metro’s “Micro” rideshare service, which offers rides in LA County for $1, is seeing more demand as gas prices continue to increase.

“It’s somewhat similar to an Uber pool or a Lyft line, but we actually have our own drivers who are part of the Metro family, and union employees so good jobs and good wages,” said Rani Narula-Woods, the Senior Director of Special projects.

Woods said Metro wanted to offer a reliable service. The service is meant to be a fast, safe and cost-effective option for quick trips around town.

The service can be scheduled up to seven days in advance or booked in real–time. Riders can book online at micro.metro.net, through the Metro Micro app, or by calling the Metro Call Center.

“Usually when I ride, I would say it’s about 10 to 15 minutes, and sometimes 20 in high traffic areas [for the service to arrive], but you will get alerts along the way. When most people ride, there’s usually not more than three people in a vehicle. Our largest vehicle is the electric vehicle so we will be able to get up to eight or ten people [in that vehicle],” said Narula-Woods.

“The whole world has changed so as a result of that, the increase in telework, the wildly high gas prices, suddenly folks are thinking about each trip a little bit more closely, and as they think about that, we’re hoping this will be one of the options that they use. They don’t have to be an inclusive Micro rider, but sometimes this is the right one,” she said.

Narula-Woods said their Pasadena zone has seen an increase in Micro ridership.

“Most recently, our Pasadena, Altadena, Sierra Madre zone hit a daily high of 500 rides so we’re seeing these on the up and up, and I would say gas prices are definitely a factor,” she said.

The majority of riders use the service to travel three to five miles, and all the rides are only $1.

“If you are in our UCLA zone, it is very dense and obviously widely congested, so that’s seven square miles at one dollar. If you go to our Watts, Compton zone, which is 35 square miles, it’s one dollar,” she said .

A portion of the fleet has ADA retrofits as well to be inclusive and accessible. The service is also testing booster seat booking for the future too.

“I think that’s going to be a game changer for our whole community because suddenly it leans into access to opportunity,” said Narula-Woods.

Micro operator, Giovanni Rodriguez, said he lives in the zone where he serves as an operator.

“I’m able to meet some of the people in my community and interact with them. It’s [Micro] gonna really change the way you think about public transportation,” said Rodriguez.

Rodriguez said people use the service for many reasons from grocery trips to getting to work.

Kae, a first time Micro rider, needed the service to get to work.

“I overslept after class before work and couldn’t catch the next bus so I looked on the transit app, and I saw Micro for a dollar and I said ‘oh that’s cheaper than paying 12 dollars for an Uber to come to work so I decided to give it a try,” said Kae.

“It’s only been getting more expensive lately and I can’t work too much because I’m a student so I have to save every dollar I’ve got,” said Kae.

Micro is also safety-focused so it has a number of cameras in the interior and exterior of the vans. The operators also receive background checks.

Micro has recently expanded its service to the Burbank Airport.

“I kid you not, in our North Hollywood, Burbank zone, it is one dollar to get to and from the airport so it might be our best-kept secret,” said Narula-Woods.

Each zone has its own operating hours, and rides cannot be booked that would arrive or depart outside service hours:

Service animals are allowed on Micro, but pets are not accommodated at this time. For more information on Metro’s Micro service, click here.