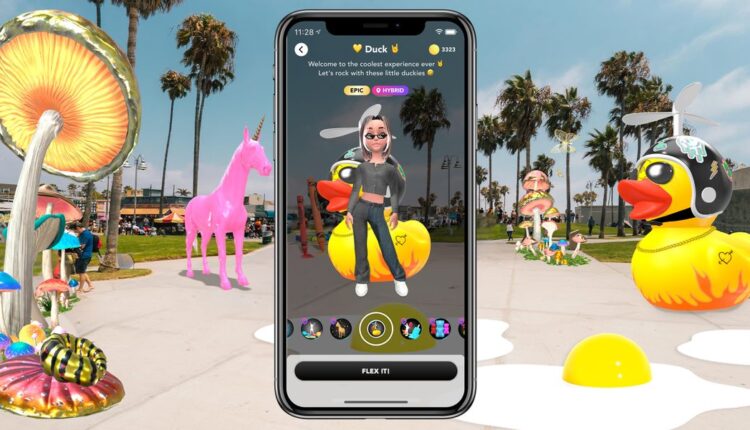 Last week, the FlickPlay app announced that it had partnered with Santa Monica (where the company is based) to become the first U.S. city to access the Metaverse through its app.

After all the Facebook hype, I wanted to find out what the Metaverse looks like and why a city is registering.

So I stood on the busy corner of Santa Monica Blvd and 3rd Street, scanning the FlickPlay interactive map on my phone looking for tokens.

Users can pick up a blue coin in the FlickPlay app.

Previously a social wallet app designed for various types of digital art and collectibles; The app now works in downtown Santa Monica to both pull you into the store fronts and make the experience too playful. That could be good deal for brick and mortar stores and the city’s tax base.

Finding tokens wasn’t too difficult: the card was filled with glowing yellow, blue, and green dots that indicated I was in the right place to redeem tokens on FlickPlay’s new Metaverse social app.

As a user, you have the opportunity to like, comment and share on other social platforms. While apps like TikTok and Instagram focus on the topic, FlickPlay focuses on the surrounding landscape – bridging the gap between physical and digital spaces. At some point I became disoriented from the physical world.

FlickPlay allows users to collect tokens to unlock and view videos through the app with their rare filter-like collectibles – most of which have a limited amount.

There are currently no challenges to the app, but like the NFTs, there is a scarcity factor that adds value to the collectibles. This gives the user the opportunity to monetize their digital collectibles. Like most mobile games, FlickPlay is free to download, but offers players the option to use the tokens they earn in exchange for material goods.

Tokens are divided into three colors: yellow, blue and green and can be earned by visiting the card in the FlickPlay app. The yellow coins act as the player’s currency to unlock experiences or purchase items from local retailers, blue coins unlock collectibles, and green coins (the rarest) come with a reward.

If there is a token nearby, tap its location on the map and the token will appear on your phone. I saw a token was further away and the app took me straight there. The token amount I received ranged from 150-250 per coin and was stored in a digital wallet within the app. That sign took me to a Dodger’s Clubhouse on the boardwalk.

While getting some strange looks as I walked around towards the sky with my phone – there were signs to be had! – I also saw some curious faces.

If FlickPlay founder and CEO Pierina Merino is right, this will soon be a familiar scene and everyone will be on the Metaverse. “In the next two years we will all have something digital,” she said. “We will all have some kind of wallet or a digital inventory of objects.”

Pierina Merino, founder and CEO of FlickPlay, hopes to create more activity in parts of Santa Monica that are traditionally less traded.

Before founding FlickPlay, Merino launched startup Pemier, a line of 3D printed products that Nordstrom picked up in over 30 stores six months after its launch in 2016.

What was missing, however, was the inability to interact with the consumer. “As a founder, it was crazy to think that I made it to one of the top retailers in the US and still hadn’t spoken to my client,” she said.

During that time, she saw the Museum of Ice Cream create communities where people can create shareable content, as well as the influence of Pokemon Go on the way people interact with the real world. With FlickPlay, Merino hopes it can help create more activity in parts of Santa Monica that are traditionally less trafficked – and therefore more prone to crime.

“It has been proven that activating unused urban spaces with art lowers the crime rate,” she said. “There is no better incentive for us than to build a metaverse ecosystem with strong values ​​and purposes that have a direct impact on the world in which we live.”

Merino believes their app can also help the local economy. “Not only do they activate the city from a creative standpoint and allow the city to control the narrative and action of people’s interaction with its various locations, but they also involve local retailers,” she said.

As someone who was never interested in games, I found the app entertaining. It even took me to stores I’ve never been to like BookMonster. Even if I haven’t earned enough tokens to buy physical items from any of the retailers, I would consider coming back to collect more tokens as soon as more local retailers jump on board, which would encourage shoppers like me to go out and to play.

After about three hours of participating in the Metaverse, my token counter hit a little over 2,000 – I finally had enough to unlock some rare collectibles. I drew on the Los Angeles Lakers collectible that cost me 900 tokens. Once unlocked, I was able to make the purchase “flexible” by showing off my new collector’s item in a video.

Merino, meanwhile, plans to expand FlickPlay to other cities as early as next year – including New York, Miami and Chicago. FlickPlay has also partnered with some local stores like fashion retailer JapanLA and Mexican restaurant Lanea to enable users to shop with their digital wallets.

“I like to move people through our cities,” she said. “At the same time, all of these new consumer behaviors are really tied to how we build our digital identity and what value these offline interactions have for people’s online perception.”

Articles from your site

Related articles on the web