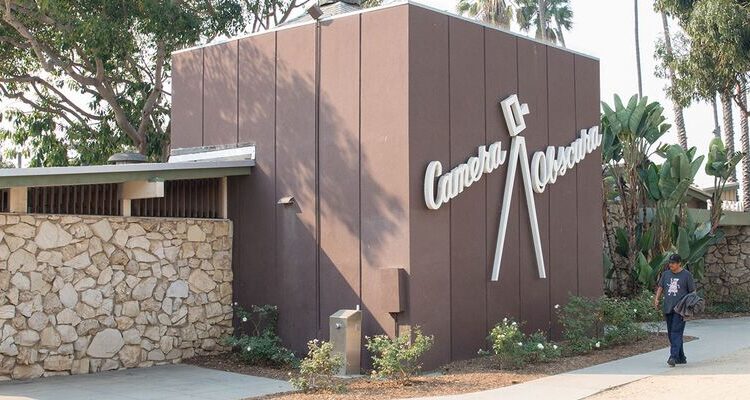 The City of Santa Monica launched the Studio Residency Program at Camera Obscura to support the work of local artists, highlight the intersection of fine arts and crafts, and provide the public with access to a variety of artistic practices and instruction. The artists are selected for three residency periods per year. The winter residents for 2021 are:

Marsian De Lellis is an LA based interdisciplinary artist whose installations and performances are reminiscent of an obsessional life. They collect fragments of real or imagined biographies of unconventional people, whose private manias become public fodder for tabloids and reality TV. They merge with the contours of their own struggles and shape the very personal into an understandable form – narrative driven objects and performances that rethink embodiment, desire and neurodivergence.

Growing up queer in New England in the 1980s, De Lellis’ preoccupation with the nuclear arms race, the alien abduction story, and the AIDS epidemic reinforced her internalized sense of otherness. In the 1990s, they organized rallies in Massachusetts that led to the country’s first anti-discrimination protection for LGBTQ students. In 2006 they jointly founded the Puppet Slam Network to support independently produced adult puppet cabarets which they directed for a decade. De Lellis earned a BFA from the School of the Art Institute of Chicago and an MFA from CalArts.

In 2018 they premiered their solo puppet and performance object performance “Object of Her Affection” at Automata, which deals with object sexuality. In 2019, De Lellis presented over a thousand hand-sewn, rotting rag dolls as part of their “(In) / Animate Objects” series on Track 16. They are currently developing Model Killer: Giant Crimes + Tiny Cover-Ups, a new installation / performance.

De Lellis’ work has received funding from the Los Angeles Department of Cultural Affairs, The Foundation for Contemporary Arts, Center Theater Group, The Jim Henson Foundation, The Center for Cultural Innovation, The Durfee Foundation, and UNIMA-USA. The objects and performances generally move on a precarious boundary between beauty and terror, urging them to further investigate the rifts of our common world.

“During my studio residence at the Camera Obscura Art Lab, I plan to build my latest installation performance, Model Killer: Giant Crimes + Tiny Cover-Ups, which I continued to write research and development for during the COVID era and edit “. as part of my solo artist residency at Automata Arts, Los Angeles. Model Killer is a morbid performing object comedy that revolves around an angry dollhouse maker who became an investigator. The protagonist builds dioramas of unsolved murders only to reveal she’s a fact of being a serial killer. As part of the Automata residence, I did dollhouse research and studied items in Automata’s collection, including two dollhouses from the early 20th Darcy Noble: In the Camera Obscura Art Lab I will continue to explore the results of my research that fueled my latest work.

At a moment when what was once considered “real” has become suspect, I began to build models that capture the truth in the fictional and reveal the artificial in reality. I’m demolishing the idea that models are simply miniaturized representations of physical space and building them up as transformative places to manage weighty abstract concepts. Once scaled down, I capture the disproportionate excesses of a worrying, dangerous world so that they can be better understood. “

The Slovenian-born visual artist and filmmaker Nataša Prosenc Stearns graduated from the Academy of Fine Arts and Design in Ljubljana. She moved to Los Angeles on a Fulbright Scholarship for her MFA at the California Institute of the Arts. Nataša works with video, film and digital techniques and applies innovative strategies in visual and narrative expression. Her main interest is the exploration of the unconscious, the mystery of the instinctive of humanity.

Her works are moving collages that integrate the human body into organic and human-made worlds and suggest that we are not separated from the environment; we are the environment. Rooted in Zen philosophy, influenced by ancient cave paintings and the exploration of her personal history of migration and transition, her videos, prints, installations and video objects inhabit the space or place where she works, condensing experiences from different worlds one. A layering process connects the visual elements and leads to narrative fragments. As people become increasingly alienated from one another and from our environment, their practice explores the issues of connectedness, alienation, unity and identity.

Her work ranges from single and multi-channel videos, video installations, short and feature films, video objects to print media. She is known for the creative use of non-gallery spaces and large multi-channel projections.

Nataša exhibited twice at the Venice Biennale. First she represented Slovenia with her video installation Gladiators at 48 bardoLA. Among other things, she is the recipient of the Durffee and Soros scholarships.

Her feature film Souvenir, published by Cinema Epoch, is available on Netflix and Amazon, The Trial of Socrates (a collaboration of 23 artists and filmmakers) is distributed by Educational Films, and her short films are available on Youtube and Vimeo. Recently, Nataša completed a new work for an original opera code L composed by Milko Lazar and began experimenting with the possibilities of crypto-art and expanding her practice into the metasphere.

“During my studio residence at the Camera Obscura Art Lab, I will focus on my new project Last Artist in Venice, in which art, love and crime move between reality and imagination and address the contrasts between wealth and homelessness in our beach community Camera The obscura building will act as the center of the narrative, offering numerous opportunities for site-specific work. At the end of the residency, I am planning a multi-channel open-air video installation in which the work created during the residency will be presented. “

Information about the Camera Obscura Art Lab and its activities can be found at santamonica.gov/camera.