Man followed, attacked outside his apartment building in Los Angeles 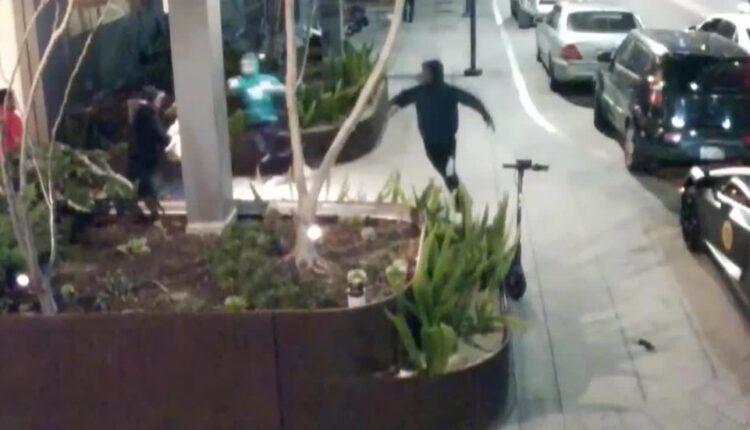 LOS ANGELES (KCAL/KCBS) – A man was attacked by two men trying to rob him outside his apartment building in downtown Los Angeles on Sunday.

The assault was caught on surveillance video.

It appears the suspects followed the victim home.

Security video shows the moment a man driving a Lamborghini grabs a bag out of the trunk and heads for the front door of his downtown apartment high-rise. That’s when two men in hooded sweatshirts creep up and attack him.

At one point while all three men struggled, one of the suspects whips the victim with his pistol several times.

Police said one suspect pointed a gun at the victim as both men demanded his watch.

Residents and people visiting the apartment were shocked to see the attack in the area.

“My girlfriend comes outside at night and walks our dog because she says it feels safe around here,” said Phillip Cervantes, a downtown LA resident.

Steve Hong, another resident of downtown LA, said he believed the South Park area was one of the safest places in downtown.

“It’s unfortunate that this is happening,” he said.

Follow-home robberies are happening more frequently, according to police. This time investigators say the suspects had followed the victim home after he left an upscale restaurant in Hollywood.

Investigators said there were additional suspects in the two vehicles the men jumped into before getting away.

“I mean, when you hear something happening here where you live, you’re definitely more on alert,” Cervantes said.

It’s not clear if the attackers got away with any of the victim’s belongings.

Restaurants and growers helping the people of Ukraine