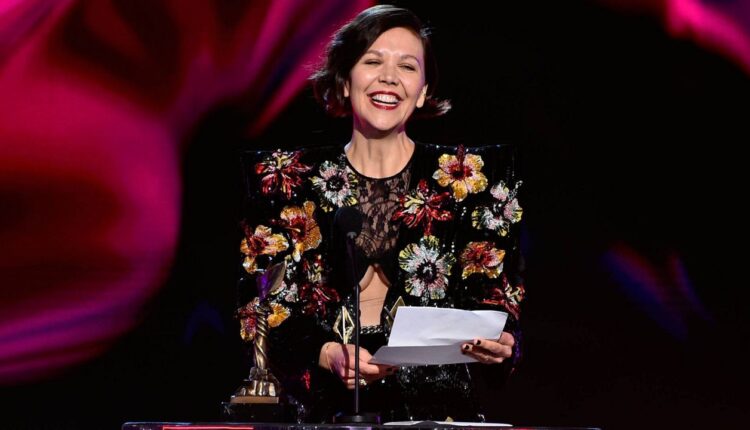 SANTA MONICA, Calif. (AP) — Maggie Gyllenhaal’s “The Lost Daughter,” “Drive My Car” and “Summer of Soul” were among the big winners at the 37th Film Independent Spirit Awards Sunday.

The ceremony hosted by Nick Offerman and Megan Mullally was held in a tent by the beach in Santa Monica, broadcast on AMC and IFC. It is the cool, casual counterpart to some of the more traditional film awards shows.

“If you don’t win, you can just walk straight into the ocean,” Offerman said.

Gyllenhaal won best feature, director and best screenplay for her adaptation of the Elena Ferrante novel “The Lost Daughter.”

Through tears, Gyllenhaal said that more than anything she believes in love. She was effusive in her praise for her crew.

“You were the first people to tell me I was a director,” she said. “Thank you to Netflix — I can’t even believe this — for your support. … Nobody ever makes their first movie and comes out loving their financiers.”

Japan’s “Drive My Car, which has also been nominated for a best picture Oscar, picked up best international feature.

Taylour Paige won best female lead for “Zola,” which was based on a Twitter thread about a wild trip to Florida.

“Wow, I’m in shock. I wrote something because I’m not eloquent and I’m drunk,” Paige said.

She thanked her grandmother who passed away on the day she got word of her nomination and Zola for, “knowing that your story was worth telling.”

Simon Rex won best male lead for playing an ex-porn star in Sean Baker’s “Red Rocket.” Rex said his career was in the dumps before Baker called him for the shoestring film.

“I’m reeling from the whole experience,” Rex said. “This is basically a glorified student film…I’m grateful and humbled.”

Mullally and Offerman got the show off to a lively start, both in three-piece suits and vests with no shirt underneath. Sarah Silverman made an appearance in a pre-taped segment offering her services as a backup host because Mullally and Offerman joined Twitter “before 2015.”

The married co-hosts said they’d hoped to be the biggest Hollywood couple in the room and were dismayed that Maggie Gyllenhaal and Peter Sarsgaard were there to upstage them.

“A listers and indie stars? Pick a lane you greedy bastards,” Offerman said.

They acknowledged Russia’s invasion of Ukraine. Offerman said he hopes “Putin (expletive) off and goes home” and implored the audience to send him off with a “Spirit Awards salute.” Many raised their hands with a middle finger.

Historically, the Spirit Awards are held on the Saturday afternoon before the Oscars, but this year moved up a few weeks.

“Summer of Soul” won best documentary. The film brings back to life the largely forgotten Harlem Cultural Festival of 1969.

Troy Kotsur got another boost before the Oscars, winning best supporting actor for “CODA.” He also won the Screen Actors Guild prize.

“I can feel the spirit of the arts and we can celebrate together,” Kotsur said.

Marlee Matlin, who presented the first screenplay award to Michael Sarnoski for “Pig,” implored the screenwriters to think of deaf actors when crafting scripts.

Andrew Garfield made an appearance to present the Robert Altman Award to his friend Fran Kranz, who he acted with in a Mike Nichols play. Kranz’s debut “Mass” is a small ensemble about a mediation in the aftermath of a school shooting between parents of a victim and parents of the perpetrator.

The show can sometimes serve as a preview of what will happen on Oscar night. Last year, Chloé Zhao’s “Nomadland” picked up best feature and director at the Spirit Awards before going on to win the top prizes at the Oscars. “Moonlight,” “Spotlight,” “Birdman” and “12 Years a Slave” also all won at the Spirits before taking best picture at the Oscars.

Because of their production budgets, many top awards contenders this year were not eligible, including “Belfast,” “King Richard” and “The Power of the Dog.” To be considered, films must have cost less than $22.5 million to make.

Soccer fans call for answers after Atlas vs. Querétaro brawl