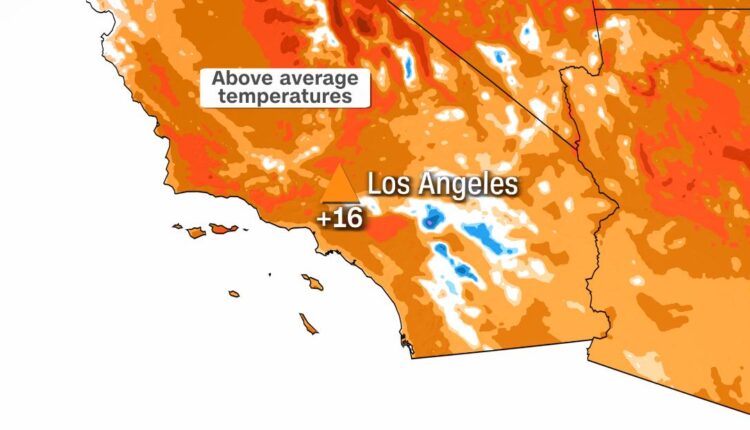 An unseasonable wintertime California heat wave — with temperatures in the 80s, maybe even as high as 90 — is forecast to stretch from Wednesday afternoon right through kickoff on Sunday. The out-of-season forecast heat prompted the National Weather Service to issue a rare heat advisory through Sunday evening.

The current record for highest temperature during a Super Bowl is 84 degrees set in 1973, a game that was also played in Los Angeles. However, it looks like this year’s game might pull off a quarterback sneak past that mark.

With temperatures in Inglewood, the site of Sunday’s big game, forecast to be 85 degrees at kickoff, this Super Bowl may be making more history than previously thought.

The only other time that the temperature during the big game was above 80 degrees was when the game was held in San Diego in 2003.

The heat advisory, issued by the Los Angeles NWS, is in place until 6 pm PT on Sunday, meaning it will be valid well past the 3:30 pm local time kickoff for the Los Angeles Rams-Cincinnati Bengals match.

Unseasonable temperatures will run 15-20 degrees above normal every day leading up to the game, with temperatures as high as 90 in some locations.

“This can lead to wintertime heat stress, especially those who are not used to this kind of heat,” NWS Los Angeles tweeted.

Bengals fans, they’re talking to you.

Many fans are making the cross-country trek from the chilly metropolis of Cincinnati, where snow is still on the ground from multiple winter storms and high temperatures were just barely hitting the lower 50s Wednesday afternoon. This is the sign you can leave that winter coat at home.

While February heat is not unheard of in California, especially in the south, the longevity of this high-temperature event is notable.

“Numerous record highs could be broken, not just in Southern California, but along the coast and throughout the San Joaquin and Sacramento Valleys,” The Weather Prediction Center says.

“For the record, the normal high for downtown LA on 2/9 is 68 degrees Fahrenheit. We are forecasting a high of 87 degrees,” The National Weather Service Los Angeles tweeted Tuesday. These high temperatures are close to edging out the historic high of 89 recorded on this day in 2016.

The historic weather we are expecting in California is a result of a high-pressure system that has been camped out over the West Coast since the beginning of February. This ridging pattern spurs strong Santa Ana winds which are known for bringing hot air into Los Angeles and surrounding areas from the nearby desert regions.

Although the temperatures this weekend are projected to break records, there is one record that will likely stand still. The all-time high temperature for Los Angeles in February is 95 degrees, set on February 20, 1995.

This stretch of unseasonable warmth is looking to rival the record of five consecutive days of 85 degree-plus temperatures recorded on February 8-12, 2016, the only other stretch of extreme heat in February of this length.

Heat isn’t California’s only concern this weekend, however.

The combination of strong offshore winds and the extremely dry air leads to the possibility of active wildfires over the next few days. NWS Los Angeles says red-flag warnings will not be issued due to recent seasonal rains and plant moisture, emphasizing that “active wildfires are possible but extreme fire behavior is not.”

These winds should help Super Bowl fans keep cool during the game.

SoFi Stadium, where the game is being held, has a roof that will protect the players and fans from the worst of the weather. But it is open to the elements.

And if it isn’t raining, the roof has 46 panels that can be opened to allow heat to escape and to increase air flow for players and fans.

But if you are a Bengals fan, you might want to consider packing a few less layers than you are used to for the middle of February.