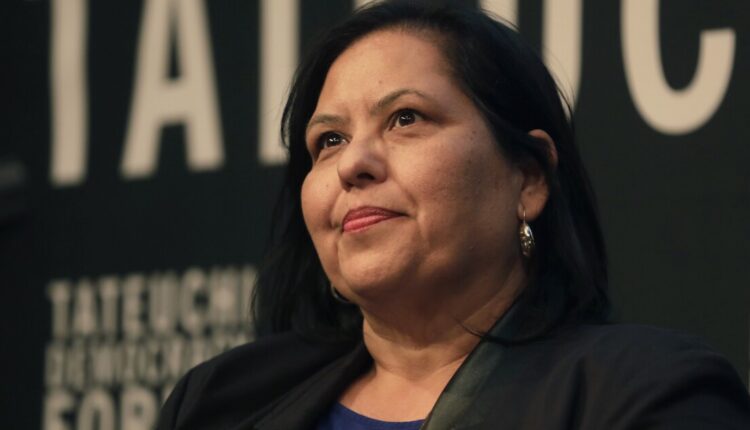 For more than 15 years, Monica Garcia has been a force on the Los Angeles Board of Education. But term limits have opened up her seat this year to four hopefuls, who plan either to build on her legacy or to push the district in a new direction.

In all, 10 candidates are vying for three seats, according to a candidate list for the June primary election confirmed Wednesday by city election officials.

Aside from Garcia’s District 2, which covers downtown and stretches north and east to include Los Feliz, Highland Park, Boyle Heights, El Sereno and East LA, incumbents Kelly Gonez and Nick Melvoin are running for reelection against smaller fields that include parents and teachers.

For more than a decade, LA school board races have been a battleground between backers of charter schools and the teachers union — along with the major funding poured into campaigns by each side. The elections often broke national spending records for school board races in each successive cycle.

In 2017, Gonez and Melvoin won election to the board with the support of charter school advocates.

At this early stage, the teachers union has endorsed only one campaign, and leaders are deliberating on other potential endorsements.

Charter backers have not officially endorsed anyone, although a charter ally, businessman Bill Bloomfield, has already begun to pour in big dollars. He spent about $3.8 million in the last school board election cycle, in 2020.

Those elected this year to four-year terms will be tasked with overseeing students’ academic and psychological recovery from the COVID-19 pandemic and will face a rare challenge for the LA Unified School District: spending down record budgets that resulted from pandemic aid and high state tax revenue. But enrollment has declined rapidly, meaning the seven-member school board must also forestall a potential budget crisis after the one-time surplus has evaporated.

Garcia was elected in 2006 to replace Jose Huizar after he won election to the LA City Council. Strongly backed by charter school advocates, she supported the rapid growth of these privately operated public schools, which initially helped ease overcrowding but soon were competing for students with traditional campuses in the nation’s second-largest K-12 school system.

But Garcia had a broader base, which included leaders of local foundation-funded advocacy groups and Local 99 of the Service Employees International Union, which represents most nonteaching district employees. She pushed successfully for part-time cafeteria workers to receive full health benefits.

Two potential front-runners have emerged among the four candidates running to succeed her.

Maria Brenes, 45, is the longtime leader of InnerCity Struggle, an advocacy and family services group that operates out of Boyle Heights. She has secured the endorsements of SEIU Local 99 and the LA County Federation of Labor.

United Teachers Los Angeles has endorsed longtime political activist Rocio Rivas, 48, who works as the research and policy duty for board member Jackie Goldberg, a union ally, and previously ran unsuccessfully against Goldberg. The union node is expected to come with substantial financial resources for Rivas.

Charter advocates could sit out this race, but they have the political power to push a candidate toward the front of the pack.

The other two candidates are Erica Vilardi-Espinosa, 46, and Miguel Angel Segura, 35.

In city filings, Vilardi-Espinosa describes herself as an accountant and community activist, noting her service on the local neighborhood council, in parent groups at schools and as the founder of a Girl Scouts troop.

Segura describes himself as a public school teacher. From 2010 to 2014, he was a participant in Teach for America, which places recent college graduates in positions at hard-to-staff schools. He has also worked in campaigns and as a staffer for elected officials, and his recent education experience includes work as a substitute teacher.

Another filer, attorney Miho Murai, failed to qualify because she lacked enough valid signatures. She plans to contest her disqualification with city election officials, she said Wednesday.

Raquel Zamora, an LA Unified pupil services and attendance counselor, turned in petitions and qualified for the ballot but then withdrew.

As of the last required spending report, no candidate in this race had reported raising funds.

District 4 is the most prosperous board district, stretching north and east from the Westside. It encompasses Encino, Tarzana and Woodland Hills in the San Fernando Valley as well as Brentwood, Pacific Palisades, Mar Vista, Venice, the Hollywood Hills and Hancock Park.

One-term incumbent Melvoin, 36, starts with a huge financial advantage over challengers, who have reported no fundraising to date. His campaign has reported nearly $350,000 in contributions. In addition, Bloomfield has spent nearly half a million dollars in an independent campaign on behalf of Melvoin.

Melvoin won a costly, mudslinging campaign in 2017 to unseat two-term incumbent Steve Zimmer. Zimmer had union support, Melvoin the backing of charter allies. It’s unclear whether the teachers’ union will oppose Melvoin, who this time has the support of SEIU Local 99, which typically endorses incumbents.

The two challengers are Gentille Barkhordarian, 56, and Tracey Schroeder, 48.

Barkhordarian describes herself in city filings as an electrical engineer and mother. She has specialized in data backup, disaster planning and data recovery for companies.

Schroeder has been an LA Unified elementary school teacher since 1998. She said in city filings: “I love my students and I love my work.”

Gonez, 33, is a one-term incumbent and president of the school board. Her District 6 stretches across most of the east San Fernando Valley, taking in lower-income areas including the city of San Fernando and the communities of Pacoima, Arleta and Panorama City, as well as North Hollywood and the hillsides of Sylmar and Sunland-Tujunga .

The Gonez campaign has raised more than $200,000. There is not yet independent spending on her behalf, although the name of Bloomfield’s campaign committee is Kids First, Supporting Kelly Gonez and Nick Melvoin for Reelection to the LAUSD School Board 2022 — suggesting spending could be on the way.

Challenger Marvin A. Rodriguez, 42, teaches Spanish at Cleveland High School, where his older daughter is a student. So he’s an ex-Marine. He’s raised just over $7,000.

Challenger Jess Arana, 44, is a Los Angeles School Police Department sergeant and high school wrestling coach. Contributors to his campaign, which has raised $33,315, include police officers and police groups. Notably, Gonez was among a board majority that voted to divert some funds from school police.

To qualify for the ballot, candidates had to submit at least 1,000 valid election petition signatures from voters in their district or pay a $300 fee and submit 500 valid signatures.

Things to do in the San Fernando Valley, LA area, March 17-24 – Daily News