Los Angeles Rams Win The NFC But They Might Lose Some Coaches, Including Kevin O’Connell 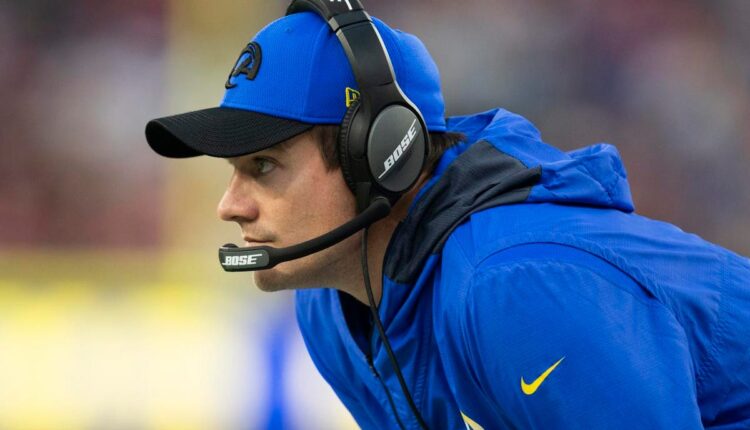 The Los Angeles Rams’ super success might mean a defection or two from their coaching staff.

The Rams advanced to Super Bowl 56 against the Cincinnati Bengals by pending the San Francisco 49ers on Sunday. But in preparing for the Bengals, some of their coaches will be keeping tabs on other teams, too.

Rams offensive coordinator Kevin O’Connell continues to be in the mix regarding numerous head-coaching vacancies.

He’s considered to be a finalist for the Minnesota Vikings’ vacancy, where he was expected to undergo his second interview on Monday.

But another name, Rams defensive coordinator Raheem Morris, has surfaced in connection with the Minnesota job.

O’Connell, an NFL quarterback for five seasons, is considered to be among the league’s brightest young offensive minds. While the play-calling duties for the Rams are handled by coach Sean McVay, O’Connell, 36, plays an integral role in the team’s offense overall and in particular, the passing game.

In fact when O’Connell was considered for a lateral move to another team before the Rams’ season, McVay declined to grant permission for his interview.

“I was really excited about the opportunity to be able to work with him in two years, continue to collaborate, learn from him,” McVay said this offseason. “He understands how valuable he is to me and to the Rams and we talked about all those things, but I think it’s a credit to the respect that he’s garnered around the league. What I would say is he’s our OC and that’s why we blocked him.”

O’Connell has also been linked for head-coaching positions with the Houston Texans and Jacksonville Jaguars, which is also a compliment to McVay and what the Rams have accomplished in advancing to Super Bowl 56 with an explosive and varied offense.

McVay will be reminded of another assistant who’s done pretty well when eyeing his opponent come Feb. 13. The Bengals’ head coach is Zac Taylor, who served as McVay’s quarterback coach the last time the Rams were playing for a title in Super Bowl 53.