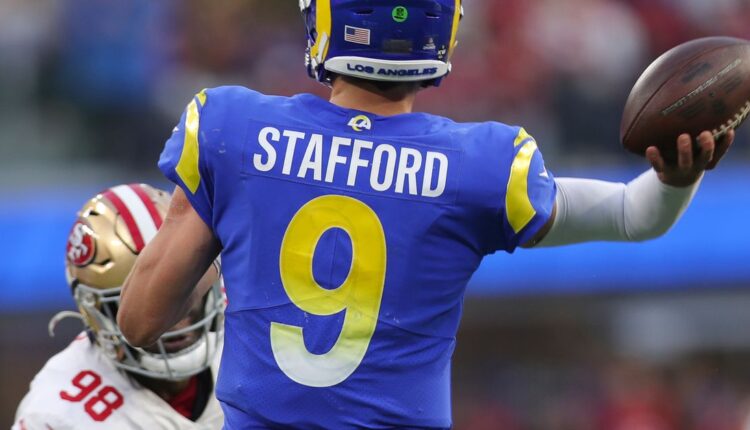 Three years later, the Rams have a chance to repeat their NFC Championship with a cast of characters that reminds me of watching Saturday Night Live and seeing Kenan Thompson and Kate McKinnon and thinking, “This makes sense.” But then also 75% of everyone else on the show is different. (It’s not a perfect analogy though because you know the Rams are good.)

Speaking of familiarity, the team standing in between Sean McVay’s second Super Bowl trip in four seasons is the same team that has stood between McVay and victory in each of the last six meetings. The San Francisco 49ers also made the Super Bowl recently and also have added some upgrades since then, like Brandon Aiyuk, Trent Williams, and Elijah Mitchell. The 49ers didn’t play in the same stratosphere in 2021 to what they were in 2020—that team also had DeForest Buckner and Richard Sherman en route to 13-3—but none of that matters anymore.

Will the Rams be the best team this Sunday?

To prepare ourselves for Stafford’s third playoff game with LA and the franchise’s fourth NFC Championship appearance since the magical 1999 season, I want to kick it back to something that went dormant on this site for a minute: The Reverse Q&A.

Then discuss among yourselves. I have posted 5 opening question prompts in the comments section below. Hit me up with your answers and let’s find out what you know about Rams-49ers and what I’m about to learn about Rams-49ers.