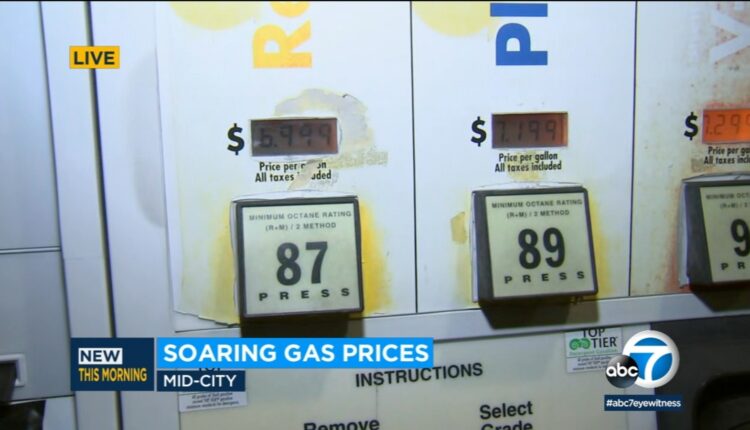 LOS ANGELES (KABC) — The average price of a gallon of self-serve regular gasoline in Los Angeles County rose to $5,247 on Saturday, but some gas stations in the area have even higher prices.

The Shell gas station located at Olympic Boulevard and Fairfax Avenue in Mid-City was advertising regular unleaded at $6.99 a gallon. The price for premium was listed at $7.29 a gallon.

Each of the three highest increases since July 14, 2015, have occurred over the past three days.

“My husband told me and was like ‘$6’ and I was like, ‘What?!'” said Joana Esparza, who was pumping gas early Sunday morning. “I think I put gas last week sometime and it was still four-something. So I was just like, ‘We need to go electric.’ I think we need to already because that’s insane. I don’t think we’ve ever paid that … ever.”

The average price rose 8.6 cents Thursday, according to figures from the AAA and Oil Price Information Service.

Oil industry analysts attribute the price spike to the possibility of a supply shortage because traders, shippers, insurance companies and banks are avoiding Russian oil transactions for fear of running afoul of Western sanctions.

Growing number of lawmakers call for US ban on Russian oil

Crude oil costs account for slightly more than half of the pump price, according to the US Energy Information Administration.

The rest of the price includes the other components of gasoline, production costs, distribution costs, overhead costs for all involved in production, distribution and sales, taxes and carbon offset fees in California paid by the refineries.