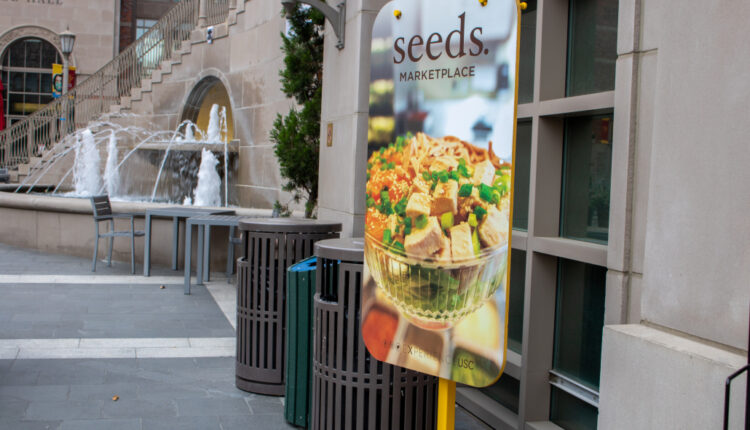 The ordinance of November 15 stipulated that all facilities for serving food and beverages provide disposable tableware only on request. (Beth Mosch | Daily Trojan File Photo)

In the city of Los Angeles, an ordinance came into effect on November 15, according to which all food and drink dispensing facilities are only required to provide disposable tableware, serviettes and other groceries on request. The new law, part of the city’s sustainability drive to reduce plastic waste, applies to both restaurants and take-out – including all USC dining rooms, the fast-food restaurants at the Ronald Tutor Campus Center, and all other dining options on campus.

The ordinance follows the city’s Straws-on-Request Ordinance, a law that only stipulates that straws should be handed out at the request of restaurant customers and that came into force in October 2019. Prior to the citywide move, USC Hospitality banned the use of straws in dining rooms in 2018. USC Hospitality, at the time of writing, has eliminated 95% of previously provided single-use grocery items such as sugar packs and condiments.

In an information presentation to companies about the details of the new regulation on November 8th, LA Sanitation & Environment described the environmental impact of plastic waste and stated that plastics are not compostable. The presentation highlighted the increasing reliance on takeaway and delivery services in the wake of the coronavirus pandemic, which has increased the number of single-use food accessories used around the world by around 250-300%.

While complaint-based enforcement doesn’t start until May 15, businesses and dining establishments across the city have already started enforcing the new law, including on-campus dining halls and restaurants.

“USC Hospitality is aware of the regulation and has made changes to its operations to ensure compliance,” wrote Dirk De Jong, vice president of USC Auxiliary Services, in an email to the Daily Trojan. “We go one step further with our sustainability efforts and provide compostable disposable items on request.”

Erikk Gonzalez, an employee at Seeds Marketplace, said he has seen a positive change in his work environment since the new law went into effect. Gonzalez, who has been with Seeds for about a month, also said customers are careful about the amount of paraphernalia they are using.

“[Seeds is] cleaner… people are more organized, ”said Gonzalez. “You save more. [Some people used to] Take four forks and throw away two. “

Kathy Thach, a freshman majoring in philosophy, politics, and law, said she hasn’t seen any change in her plastic consumption since the new regulation went into effect.

“I don’t see much difference in general,” said Thach. “With regard to this new LA regulation … which tries to solve the problem of plastic pollution, in my opinion it is just another tactic to blame individual people for the facade of environmental friendliness.”

Thach said that when it comes to the discussion of pollution as a whole, it puts more emphasis on the impact of individual consumption than that of businesses.

“This is just another one of those plastic-related conversations and I have a feeling nothing really changes,” Thach said.

Reducing the use of single-use plastic is an important part of USC’s sustainability goals, Chief Sustainability Officer Mick Dalrymple wrote in an email to the Daily Trojan.

“Eliminating non-essential single-use plastics is one of USC’s initiatives to meet our zero-waste goals,” wrote Dalrymple.

Dalrymple wrote that he sees the regulation as the “next step” that “makes sense” in the context of the university’s overarching sustainability goals.

“Nature does not understand the terms ‘waste’ or ‘throw away’ because all resources in nature are reused,” wrote Dalrymple. “Hopefully one day people will no longer remember these terms and look back in amazement at how many valuable resources have been wasted.”

SMa.rt column: Santa Monica – Who does the city work for?

How San Pedro, not Santa Monica, became the home of the LA port