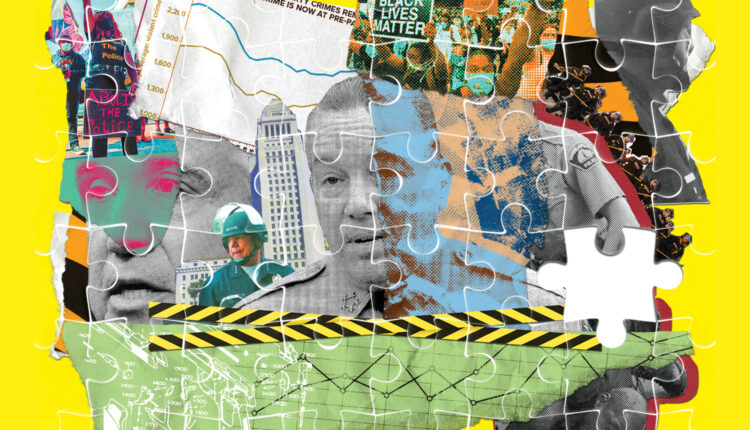 In 1993, a Time cover story asked, “Is Los Angeles Going to Hell?” The town was still swaying from the Rodney King riots, still gang violence, still caught up in the crack epidemic. For the third year in a row, more than 1,000 men and women were murdered within the city’s rugged borders. So the question wasn’t a complete exaggeration.

And then something funny happened: crime began to tick down steadily, not just in LA but across the country. Social scientists struggled to explain the unexpected shift. There was the broken window theory (popularized by Malcolm Gladwell’s bestseller The Tipping Point); the theory of abortion, detailed in the bestseller Freakonomics); and the lead crime hypothesis (promoted by Mother Jones in 2016). Some said it was stricter laws and longer prison terms. Some said it was the aging population. Whatever the reason, the decline in crime changed urban life in America. The problem with cities wasn’t that they were too dangerous, but too expensive.

Then, last year, when COVID ravaged the globe, crime took another unexpected turn. Property crime declined; there were fewer break-ins and thefts. And fewer rapes were reported. But violent crime increased in most cities, including Los Angeles. There were more than 350 murders in LA last year, up 38 percent from 2019.

And the trend seems to continue. The LAPD reports that in the first 24 weeks of 2021, reports of shots fired rose 48 percent. The number of people injured by gun violence rose by 50 percent. And homicides rose by 26 percent. Los Angeles is well on its way to recording 437 murders this year, the majority since 2006.

“It’s a mystery,” says David Abrams, a law professor at the University of Pennsylvania who runs the City Crime Stats website. “I think a lot of people are trying to understand. I haven’t seen anything convincing that sums it up completely. “

Captain Paul Vernon headed the COMPSTAT division of the Los Angeles Police Department until last April. Vernon spent much of 2020 trying to figure out what was behind the surge in murders. Some quickly attributed the increase to COVID. However, according to Vernon, homicides and serious assaults rose in the first two months of 2020 before the pandemic hit the US – a smaller decline in violent crime.

Then, in May, George Floyd was murdered by Minneapolis police officer Derek Chauvin, sparking protests across the country. And for reasons that are now the subject of some debate, Floyd’s death marked a turning point; As a result, the murders increased in most American cities. The murder rate in Milwaukee has nearly doubled. In Washington, DC, the number of murders rose 64 percent. The Philadelphia murders have hit a 30-year high.

The first thing Vernon noticed when he looked at the LA data was that the top wasn’t evenly distributed across town. The shootings increased in the same places that were already disproportionately high – south of Interstate 10, east of the LA River. Most of the surge in gun crime was due to multi-victim shootings. Vernon also noted a prevalence of “walk-up” shootings. “When you go
to go up to someone and shoot them, “he says,” you are
be more successful in achieving your goal, and
you will be more deadly. “

Why the sudden increase in gun violence? Vernon’s theory is being promoted by a number of US law enforcement agencies: Reduced police presence in high crime areas. Some of it was intentional. In October 2019, the LAPD announced that its Metropolitan Division, a group of 200 officials, would stop stopping random drivers after an investigation by the Los Angeles Times found that traffic controls were disproportionately targeted at black drivers. In fact, traffic stops decreased by 27 percent in 2020.

But Vernon says the drop in police presence was also due to another, more organic, reason. “If you label the police as ‘racist’, if you demand the defusion of the police and stigmatize the police, there will be a natural police withdrawal,” he says. “The police will not be as proactive in stopping – initiating activity – if they believe the result will be their firing or being labeled a racist.”

Needless to say, Vernon’s view is controversial and contested by activists who argue that the rise in murders has more to do with economic conditions than a lack of police presence.

“The idea that police demoralization may have increased homicides really weighs on gullibility,” said Richard Rosenfeld, professor of criminology at the University of Missouri-St. Ludwig. “If the police are pulling out, why did they only affect murder rates? Why not property crime? ”He adds,“ It could have had an impact on homicides. But a 35 percent increase in Los Angeles? Very doubtful. “

“The idea that demoralization of the police force could have led to such an increase in homicides really weighs on gullibility” – Richard Rosenfeld, professor of criminology

Alternative theories abound. David Abrams’ best guess: The pandemic has upset the delicate balance between various gangs and organized criminals. Some may have returned from self-imposed quarantine last summer and found that their turf had been taken over, which may have sparked fighting.

Others blame the criminal justice reforms that have taken place across the country, including those of LA District Attorney George Gascón. For example, in May, Glendora police arrested the same man three times and released him three times for three different car thefts in a single day. Police blamed a new COVID-era policy not to detain people arrested for certain minor offenses.

There are more guns on the street too, and perhaps more importantly, there are higher caliber guns with higher capacity magazines. That could explain why there are more multi-victim shootings. But knife wounds are also increasing this year. Abrams believes the increase in shootings is less about cops and more about the citizens they are supposed to protect. “Obviously something is wrong with the relationship between the police and the communities they serve,” Abrams says. “People cooperate with the police even less than they used to. Community justice takes hold. People take matters into their own hands. “

Whatever the reason, the rise in homicides has the potential to turn the current political dynamic in American cities around. Crime became the central theme of New York City’s mayors’ race, driving former police officer Eric Adams to victory in the Democratic primary. Adams has called for more police work and defended policies like Stop and Frisk. LA is set to hold its own mayoral election in November 2022, and observers wonder if former cop Joe Buscaino will similarly benefit from the crime problem.

And then there is Sheriff Alex Villanueva, who, in view of his demands for resignation, is using the increase in crime to maintain power. He has attributed the rise to “fewer cops, more crooks, fewer consequences”. His solution? He created a unit that processes concealed carry permits faster.

Stay up to date on all the LA news, food, and culture. Sign up for our newsletter today.