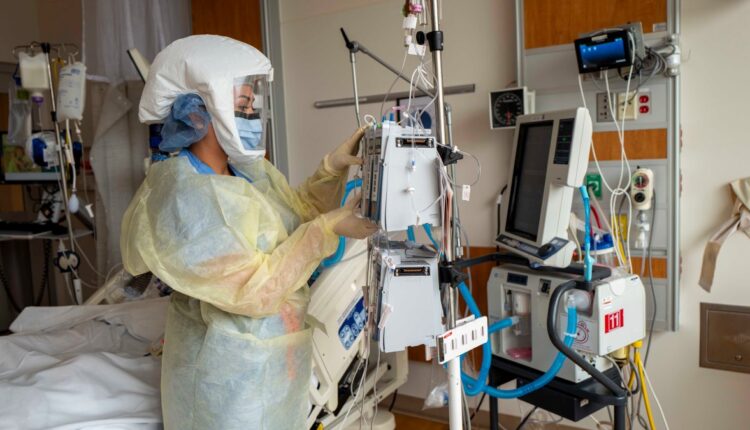 The number of coronavirus patients in Los Angeles County’s hospitals declined slightly today, falling from 1,226 to 1,218, the 13th straight decline.

According to the state, the number of intensive care patients fell from 368 to 360.

The county is not reporting daily COVID-19 case and death numbers on Saturday or Sunday, and officials say the health department will be working on upgrades to its computing systems. However, the data is still being collected and reported earlier this week.

The US Centers for Disease Control and Prevention benchmarks a transmission in the high category if there are 100 or more new cases accumulated per 100,000 population over the course of a week. Much of the country is currently in the “high” transmission category.

However, the rate in Los Angeles County dropped to 104 cases per 100,000 last week, a “welcome” 35% drop from the previous week, said Public Health Director Barbara Ferrer.

“Other parts of the country that do not have masking requirements and do not have as many vaccinations have not seen these significant decreases in cases,” she said.

If the county’s rate continues to decline and drop below 100 new cases per 100,000 population over a seven-day period, it could be placed in the CDC’s less severe “significant” transmission category.

However, Ferrer warned that a reversal of fate could still occur.

“While we welcome the declines, we believe that as routine screening tests and mixing in schools and workplaces, travel and Labor Day gatherings increase, we are at risk of our case numbers rising again,” she said.

By October 11th, you must show proof of being fully vaccinated anywhere in West Hollywood, including a restaurant, gym, or salon. Robert Kovacik will report for NBC4 News on September 10, 2021 at 11 p.m.

Ferrer also again lamented the slow pace of vaccinations in the county. She said only about 56,000 first doses were given in the county last week.

Ferrer expressed hope that vaccination regulations, such as those announced Thursday by the Los Angeles Unified School District for eligible students 12 years and older, and by President Joe Biden for large corporate workers, will have an impact.

According to the latest figures, 75% of eligible district residents aged 12 and over have received at least one dose of vaccine and 66% are fully vaccinated. Of the county’s total population of 10.3 million, 65% have received a dose and 57% are fully vaccinated. This population includes approximately 1.3 million people under the age of 12 who are ineligible for syringes.

The average daily rate of people testing positive for the virus in the county was 2.6% on Friday, a slight decrease from the previous Friday.

While the mu variant has raised eyebrows on concerns that it may bypass vaccines, it is not yet high enough to be considered a “worrying variant” by health officials. Ferrer said the highly infectious Delta variant is still the number one threat, accounting for almost 100% of all samples that are subjected to genetic sequencing to identify variants.