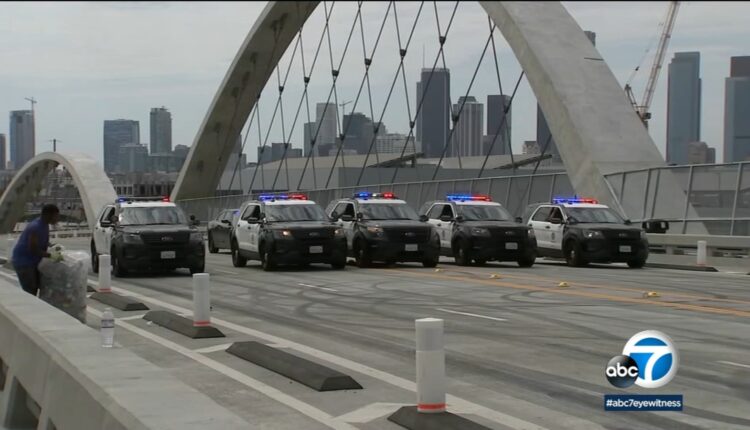 LOS ANGELES (CNS) — Over $700,000 in funding from the city of Los Angeles to remove graffiti and provide other maintenance on the Sixth Street Bridge will have to wait after the City Council referred the matter to the Budget and Finance Committee Friday.

The bridge, connecting Boyle Heights with the downtown Arts District, has been closed several times since it opened July 10 due to what police called “illegal activity” that has included people converging on the span, performing spinouts, burnouts or blocking traffic.

The City Council’s Public Works Committee recommended last week that the council approve $706,000 toward maintaining the bridge. But on Friday, the council sent the item to the Budget and Finance Committee rather than take a vote on authorizing the funding.

“I hope that in the meantime, that we’ll certainly continue to address the priority issues on the Sixth Street Bridge right now as quickly as possible, in order to continue to stop that problem from spreading,” Krekorian said.

During last week’s Public Works Committee meeting, Councilman John Lee pushed back against de León’s funding request over concerns that the city would spend too much money on public works for a single bridge, while other districts wouldn’t receive a proportionate amount of funding. The recommendation passed 3-1, with Lee dissenting.

Lee pulled the bridge funding item from the agenda at the beginning of the meeting for a separate vote and also intended to speak on it, but did not make a comment after learning the item would not be voted on.

De León said he agreed with Krekorian, “since it is a fiscal question that is before the Budget Committee, so we can resolve it and come back to the fuller committee as a whole.”

Pete Brown, de León’s communications director, told City News Service the funding was referred to the Budget and Finance Committee in order to be “mindful and careful” in proceeding with the long-term plan in maintaining the bridge.

“We want to make sure that the funding is adequate … and it is part of the overall operations of the bridge and included in our budget,” Brown said.

Brown added that there are no concerns about the funding. In the meantime, maintenance services are continuing and there has been a drop in graffiti attempts on the bridge, he said.

De León said at the meeting, addressing his colleagues: “We have the Hansen Dam in the east valley of San Fernando Valley, we have Venice Beach in Venice, we have Griffith Observatory for Griffith Park, now we have the Sixth Street Viaduct Bridge. Ultimately at the end of the day, we’re one city and we’re one LA”