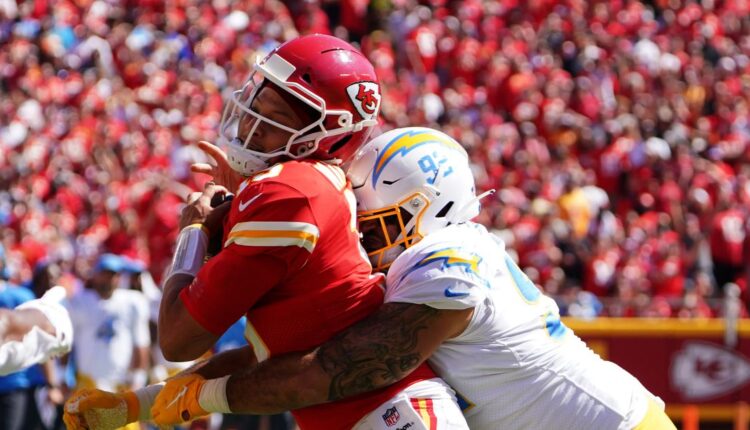 I’m finally back from my trip this weekend, traveling through Kentucky and West Virginia and watching the first half of the game on my phone while on a paddle boat river cruise in Louisville. Good times.

Anyway, I’m back now so let’s dive into the snap counts from the game.

The Los Angeles Chargers had 66 offensive games against the Kansas City Chiefs and needed almost all of them to secure the dub.

For the second week in a row, all 5 offensive linemen played 100% of the snaps together with the “gangster” QB Justin Herbert. This is a great trend and I hope you can keep it up. Especially since they only gave up 6 QB hits, a single sack, against a pretty good defense from the Chiefs while the main rusher of the day Austin Ekeler averaged a very healthy 5 YPC on 11 carries.

Speaking of Austin Disgust, it looks like he’s getting real confidence in his body and warmed up for the season. He started out more on a pitch count, but over 3 weeks his percentage of snaps has increased from 58% in week 1 to 63% last week and to 74% this week. As a result, the Chargers were able to play 2 more RB sets this season than before, as the total percentage of RB snaps was 102% for the first time over 100%.

The Chargers also played the TEs with the highest total percentage this week. In Week 1, the TEs played a total of 134% of the Snaps, in Week 2 they played 128%, then this week they played at 139% and Jared Cook played 70% of the Snaps after playing no more than 59% in the first two Weeks. The “victim” of this shift was rookie WR Josh Palmer, who hit a season low of 15% of the snaps this week. 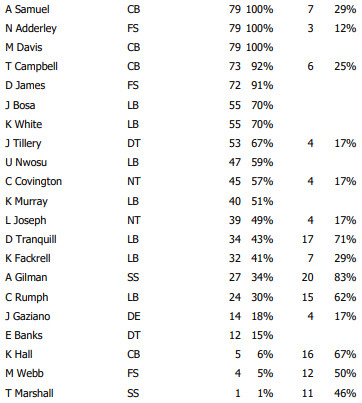 The big story here is that Drue Tranquill earns some of Kenneth Murray’s snapshots and also takes a lot more in the field over time. Murray had 51% of the snaps and ended up with 3 tackles. Tranquill played 7 fewer snaps, 43% of the total defensive snaps and collected 8 tackles, a half sack, a TFL and a QB hit. I would expect Tranquill to continue to see a large part of the field in defense.

The other big change was that Tevaughn Campbell got a lot of playing time. In weeks 1 and 2 he had a total of 3 snapshots. In Week 3 Campbell played against the vaunted Chiefs Passing Offensive 73 Snaps and boy did he play. During this time on the field he came to the ground with 4 tackles, but had also defended 2 passes and forced 2 fumbles, which the Chargers both recovered. He was a game breaker and showed why the coaching staff kept him with them even though he was buried in the depth table.

Specialist teams have remained largely the same, although there may be a change on the horizon if Tristan Vizcaino continues to miss additional points and field goals.