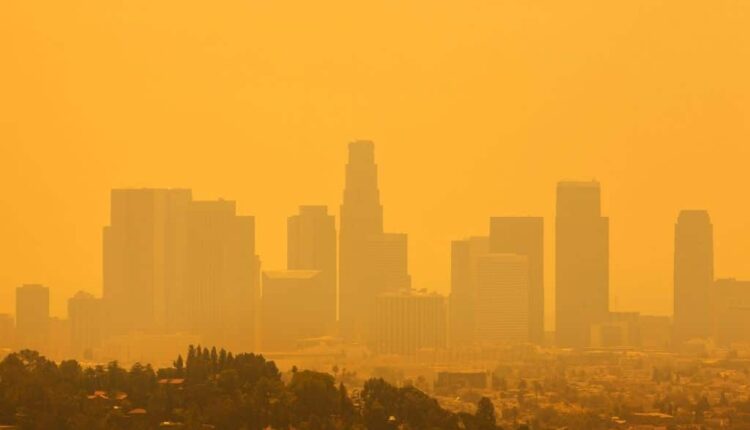 Famous beaches, celebrities, and Hollywood movies are what spring to mind when we talk about Los Angeles. Despite improvements in recent decades, the region has recently become equally well-known for its poor air quality. The worsening air pollution in Los Angeles has caused nothing but serious issues to the climate and the health of the people living there.

Los Angeles, or more commonly known as LA, is the largest city in the US state of California. It is internationally known for being the home of major entertainment businesses such as Hollywood and the heart of the American film industry. The area has become world-famous for producing countless blockbuster movies, as well as million-dollar mansions and ocean views, making it one of the world’s most expensive cities to live in. LA is also one of the top vacation destinations in the US, partly because of the city’s Mediterranean climate and famous beaches such as Malibu, Venice Beach, and Santa Monica. Yet all these selling points are being threatened as the city is being plagued by worsening air pollution and smog.

In one of its air quality reports, the American Lung Association revealed that 40% of Americans live in areas with unhealthy levels of pollution. In a separate report, it gave LA and other counties in Southern California at ‘F’ degrees for poor particle and ozone pollution, with LA currently having the worst air pollution in the US. The city is often covered by a yellow shroud in the sky.

Interestingly, air quality in the region has made substantial improvements in recent decades due to local and state rules that have helped reduce toxic air contaminants. The average concentrations of particulate matter (PM2.5) – fine particles that can damage lungs and trigger heart attacks – have dropped dramatically and no longer routinely violate federal health standards. The number of potential cancers tied to toxic air pollutants also declined by 87% between 1998 and 2018 in L.A. However, nitrogen oxides, which are a key ingredient of smog and fine particles, began to rise in the fall of 2020. If LA has been doing so well in the past 10 years or so, what caused the recent spike in pollution?

As with any major metropolitan city, emissions from vehicles and manufacturers contribute to poor air quality. the large population of 4 million in LA, with another 6 million in the surrounding county, significantly contributes to its ‘non-attainment’ air quality status because of heavy vehicular emissions and traffic congestion. LA is the third most economically powerful city in the world (behind Tokyo and New York), with its shipping industry playing a huge part of its economic structure; the Port of Los Angeles and the Port of Long Beach are the two busiest container ports in the United States. Nearly 40% of the country’s imports come through the LA area, transported, of course, by fossil-fuelled vehicles that release toxic particles in the atmosphere. The operation of these ports relies on fossil fuel or diesel to run ships, trucks, and other transportations, becoming huge contributors to poor air quality especially in recent years as trade with Asia has expanded. Container trade increased by 18% compared to 2019 at the two ports. The increase in cargo imports and pandemic-induced supply chain disruptions have led to more anchored vessels running on polluting auxiliary engines.

Severe heat waves and extreme wildfire events can also contribute to worsening air pollution in Los Angeles. Many parts of the US have experienced record-breaking temperatures in 2021, and according to the Environmental Protection Agency, heat waves have disproportionately impacted Southern California, with especially hot temperatures and the region warming more than the rest of the state over the past century. Los Angeles is predicted to experience an average of 22 extreme heat days annually by 2050 – up from six days in the period from 1980 to 2000. The burning of fossil fuels traps more heat energy, which in turn pushes up average temperatures.

Hotter and third weather conditions subsequently fuel wildfires, as seen with the case in California. Wildfires are often driven by dry winds, low humidity and high temperatures, and the climate crisis is creating the perfect conditions for them to burn hotter, faster and more frequently. As a result, wildfires are increasing in size and intensity in the Western US, and wildfire seasons are growing longer. In California, more than twice as many acres of land have been burned by wildfires compared with the five-year average, with more than 5.5 million acres burned on state and federal lands since the start of 2020. That amounts to more than the previous six years combined. Together, this impacts the air quality in the region, adding more toxic smoke and greenhouse gases to the atmosphere.

To make things worse, LA’s basin— a dip in the earth’s surface shaped like a bowl – traps the ozone pollution and keeps it there. The ‘good’ ozone is the layer high in the atmosphere protecting the Earth from receiving too much UV radiation. It is the ‘bad’ ozone, manmade and low on the ground, that is extremely harmful to us – it causes serious health problems ranging from minor irritations, coughing, and wheezing, to asthma attacks. Breathing in particle pollution can also contribute to heart attacks, strokes, and even premature death.

Much like many cities across the globe, the early weeks of the COVID-19 pandemic saw a remarkable boost in air quality because of the dramatic drop in transportation and lockdowns worldwide. In one of her studies in 2020, Yifang Zhu, a professor at University of California, Los Angeles (UCLA) found that Traffic reductions in LA were directly responsible for a 30% decrease in nitrogen oxides. After a few months, when restrictions were loosened and traffic rebounded, the short-term decline in driving only made a short-term dent in pollution. The brief gains in air quality could not combat the return of driving, wildfires, and heat waves caused by climate change.

Climate change and severe health problems will continue to persist as long as no further actions are taken to improve the status quo. In the long run, there are practical ways to reduce the air pollution in Los Angeles. With the overwhelming number of motor vehicles in Los Angeles County, expanding and improving public transportation systems, while making them accessible to all residents, is one solution that will aid in cleaner air quality. The Los Angeles Metropolitan Transportation Authority can continue using more fuel-efficient vehicles as well as utilizing renewable energy and facilities. The government should work hard to clean up all the sources, improve the roadways, and have better urban planning so people would not have to drive everywhere. If we can find a sustainable, equitable way for people to drive less and telework more, there are significant air quality benefits from it. The pandemic did offer a reminder that less driving does make a difference and a glimpse of what LA with a far cleaner air would look like, but we shouldn’t need a pandemic to clear the air.