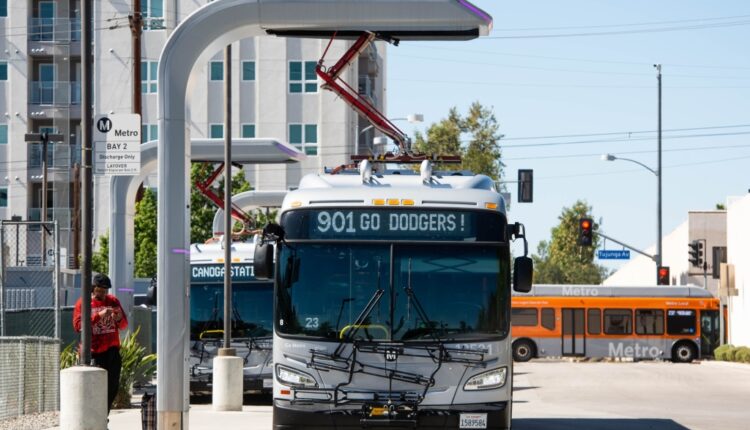 For more than a year, it appeared that San Pedro’s popular Silver Line bus — delivering a nonstop, straight shot ride between the port town and downtown Los Angeles — was going to be cut short.

Under a Los Angeles County Metropolitan Transportation Authority plan to put a new electrified Silver Line bus into service, the route would have ended at the Harbor Gateway Transit Center, about 10 miles shy of San Pedro. That’s because there was no Metro-owned property in the port town where a charging station could be installed.

But now, it seems the Silver Line will continue visiting San Pedro — thanks to newer technology making longer-range electric buses available to provide for a full-service replacement.

The Los Angeles Metro Board recently approved a motion by board members Janice Hahn, Hilda Solis, Holly Mitchell, James Butts and Mike Bonin to put in a change order for the 100 electric buses previously ordered for the Silver Line, now officially called the J Line after Metro nixed the traditional-and-still popular color system. In exchange, the motion calls for extended-range buses.

Hahn earlier objected to the initial proposal on Nov. 18, 2020, that cut the line short of San Pedro, instead introducing an unanimously approved motion directing Metro staff to meet with officials from Los Angeles County, LA city, the Port of Los Angeles and Neighboring transit agencies to discuss possible joint-use and public-private opportunities for charging stations.

The Silver Line, she and other speakers from San Pedro said, would be a flow to the port town, which often felt neglected within the sprawling Los Angeles metropolis.

With longer-range electric buses now available, however, the problem appears to be solved.

The regular Silver Line bus has continued running as usual in the interim, providing a needed service for people traveling between San Pedro and downtown Los Angeles, some 25 miles away.

Hahn’s office said it believes the new, long-range electric buses, the change order for which the Metro board OK’d on Thursday, Feb. 17, could be ready by the end of this year.

Metro’s goals, overall, include switching from compressed natural gas buses to a 100% electric bus fleet by 2030.

In October, Metro replaced natural gas buses on the G (formerly Orange) Line in the San Fernando Valley with 40 new 60-foot zero-emissions buses, each boasting a 150-mile range on a single charge.

“The 2020s will be defined as the decade for climate action,” Los Angeles Mayor Eric Garcetti said in an Oct. 13 Metro release. “Metro’s transition to electric buses on the G Line is a perfect example of a bold policy made real.”

The plan, the release added, is contingent on continued advances in technology that will increase bus travel range, reduce charging times and drop prices.

Sign up for The Localist, our daily email newsletter with handpicked stories relevant to where you live. Subscribe here.