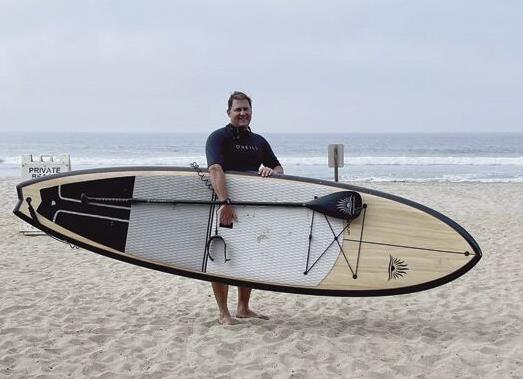 Well, it’s nowhere near the Guinness World Record Book for stand-up paddle boarding, but this feat may never have been attempted before: On September 11, Malibuite Jason Riddick paddled 23 miles from the Malibu West Swim Club to the Santa Monica Pier in 8 ½ hours without stopping. Plus, it was a completely spontaneous, unplanned event – he got on the board and decided to just move on. Fortunately, he had some water, a cell phone and a few candies with him.

This is Riddick’s account of his adventure, with minor changes:

“When I got on the stand up paddleboard at the Malibu West Swim Club, it was 10:50, calm and nice, and I thought I was going to go a mile or two, but then I just kept going.

I had my cell phone and took a few calls from my wife during the trip.

I’ve always wondered what it would be like to do the whole trip from Malibu to Santa Monica on the water because I’d been riding it so many times. When I got to Point Dume it was super nice. As I was driving around the top, one of the surfers in front of Little Dume asked if he could have a sip of my beer, but I only had water.

I went to Malibu Pier and got there around 3am.

Two yachts were anchored off Carbon Beach and I paddled between them. The security guard just waved. Maybe they were there for the surf competition at Surfrider Beach, but they would have been too far to see anything.

The coast is not straight and there are short cuts across small coves that take me up to half a mile from the coast. I met a lifeguard out there who was training by swimming to a buoy.

I kept seeing shapes in the water and hoping they weren’t great white sharks. I saw a large gray figure go by and it turned out to be a dolphin. But it’s cool to see the leopard sharks and all the fish right to the bottom.

When I was about 10 miles from Santa Monica I got tired, but eventually I thought I could see the ferris wheel on the pier and thought I couldn’t stop. The biggest temptation was the Taco Bell, which I could see on the corner of Sunset and PCH, and I was dying to stop there.

I had a couple of fruit snacks – two packs of gummy bears because my kids like them. I only cracked one after almost 15 miles and could then feel the energy return to my body.

I made it at 8:30 pm and it was dark and kind of scary and the waves were getting rougher. I fell off the board a couple of times. I walked around the Santa Monica Pier, surfed a little wave on the beach, and then went to Hotdog on a Stick where my wife was waiting with the SUV.

On the way home we stopped at MacDonald’s and I ate junk food with power.

After the trip I posted on Facebook and was surprised at the interest people showed – I think because we all drive so often. “

He joked that he probably wouldn’t be able to run 23 miles, but for some reason he was able to do stand up paddle boarding. He added that the winds and currents make it much easier to head towards Santa Monica from Malibu West than the County Line, and that knowing when conditions are right to go out requires judgment.

Riddick, attorney and board member of Malibu West HOA, started stand-up paddle boarding three years ago after moving to Malibu with his wife and three children in 2016. He took a few lessons, went out with a neighbor, and gradually extended his paddle board trips. But the longest trip he had made before was from the Malibu West Swim Club to the County Line – a 16-mile round trip.

His next big paddle boarding goal is to take part in the Catalina Classic, the annual 32-mile paddleboard race from Catalina Island to Manhattan Beach Pier, which has been held every August since 1955.