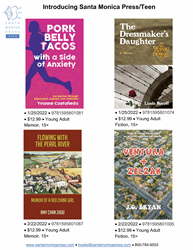 “I decided it was time for Santa Monica Press to take on a new challenge that could have a profound impact on young readers, while at the same time raising funds through the sale of the titles to support nonprofit literacy organizations like z words come alive. “- Jeffrey Goldman, publisher

Long known as a versatile independent publisher with a focus on Southern California on its list of quality books, Santa Monica Press recently announced that after 25 years of publishing adult nonfiction, the press is launching the Santa Monica Press / Teen with Young Adult Narrative Nonfiction brings and historical fiction. A percentage of the entire YA line’s sales will be donated to nonprofits dedicated to promoting literacy.

The first series of Young Adult (YA) books, due out in the winter of 2022, includes four titles – two novels and two memoirs:

For the past decade, publisher Jeffrey Goldman has been heavily involved in the nonprofit world, serving as both a board member and chairman of the board of Words Alive, a nonprofit literacy organization. The power of YA really hit Goldman while working as the Words Alive Writing Facilitator at Monarch School, which helps children affected by homelessness.

“I knew from my own children’s education and friendships and the support of the librarians at their school that YA literature can have a powerful effect on a young person. But what I saw at Monarch School was how YA literature can literally change lives, ”Goldman wonders. “I decided it was time for Santa Monica Press to take on a new challenge that could have a profound impact on young readers, while at the same time raising funds through the sale of the titles to support nonprofit literacy organizations like z words come alive. “

High school kids barely interested in school came across the carefully selected books from the Words Alive curriculum. “I remember a young man who was brand new to school, a junior high school who had been to different schools and different juvenile detention situations. And this boy was one of the most amazing writers I have ever met. But he thought nothing of it, because he had never had anyone at home to encourage him until he read the book Words Alive gave him: Jimmy Baca Santiago’s A Place to Stand. These memoirs changed his life. He devoted himself to his writing. “

Regarding the Santa Monica Press’ first foray into YA, Goldman says, “True to our roots, it’s a diverse mix. Written by a writer whose mother is Mexican and father is Cuban, Pork Belly Tacos explores a traditionally taboo subject in these communities. Pearl River is by an author who spent much of her childhood in communist China. Ventura and Zelzah is a coming-of-age novel set in a suburb of Los Angeles in the 1970s, and The Dressmaker’s Daughter, set in Romania, presents a new perspective on the Holocaust. “

To top it off, the next release in the Santa Monica Press / Teen series is what Goldman claims to be a book “in the great tradition of the Great American Novel – written only by a British man”! He pauses, laughs, and then concludes, “I assure you that here at Santa Monica Press we will always be eclectic.”

Santa Monica Press has published an eclectic range of non-fiction books for over 25 years. Our critically acclaimed titles are sold in chain, online independent, and university bookstores around the world, as well as in some of the most popular retail, gift, and museum stores in North America. Our authors are recognized experts who are in demand by the media and are reported nationally and internationally in newspapers, magazines, the Internet, social media, radio and television. At Santa Monica Press, we’re not afraid to cast a broad editorial network. Our list of vibrant and modern non-fiction books includes books from pop culture, film, music, humor, biography, travel, and sports, as well as regional titles with a focus on California. We recently added Young Adult Fiction and Young Adult Narrative Non-Fiction to our list! Remember to look for the clam!