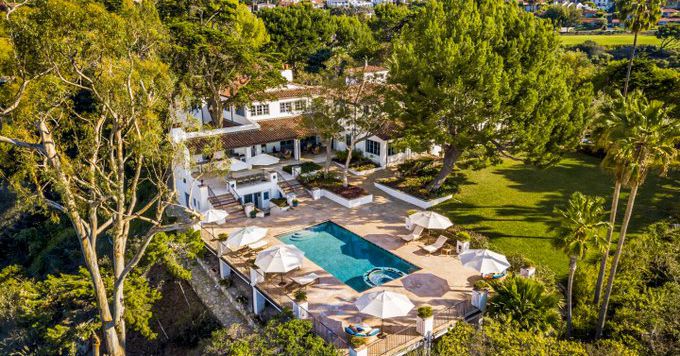 We knew new USC coach Lincoln Riley was going to go big on his Los Angeles home, but I don’t think anyone expected a palatial poop palace.

Obviously this is an amazing house. I don’t know if anyone needs 13,000 square feet to live in, but more power if that’s your desire. Naturally it has all the amenities you’d expect from a $17.2M mansion, like a pool, guest house, and tennis court — but it also has a sauna, a putting green, a movie theater and a custom-build wine cellar. That’s a ridiculous level of opulence.

While I can marvel at all those things, I’m truly taken back by this home’s bedroom-to-bathroom ratio. It’s customary to have a half-bath more than your number of bedrooms, maybe a full if you’re lucky — but Riley’s new house has FIVE bathrooms more than bedrooms. This specific house is off the market, but looking at similarly grandiose listings the average bedroom size in this price range is around 27×27.

So, if we assume each bedroom has a bathroom, that means we’re looking at 7,897 feet of living space remaining. Now, let’s assume that the guest house is around 1,700 square feet, and has its own bathroom.

We now have four bathrooms and 6,197 square feet remaining. This means that as you’re walking around Riley’s home and you need to poop, the furthest you’ll ever need to walk is 1,500 feet. That’s just solid design. When it comes to most commercial applications (and it varies state-by-state), it’s generally in the plumbing code that a building needs to have at least bathroom every 5,000 feet in structures that exceed that number. Riley’s home is way ahead of the curve.

When you’re giving someone a grand tour and nature calls, you don’t want them to have to backtrack the length of a mall to get to the bathroom. This was they can have a nice leisurely stroll as you show them the ornate windows, drop one off at the nearest bathroom, and keep on with the tour.

Congrats on the house, Lincoln. Enjoy the pooping.

Santa Monica City Council To Divest From Any Russian-Tied Assets