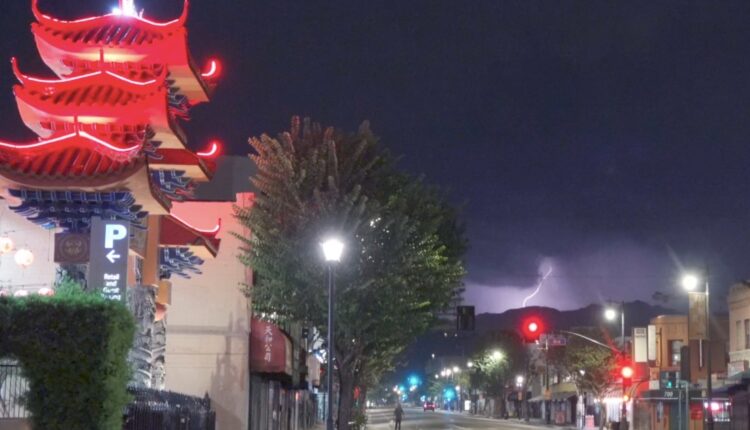 In the middle of a summer of ecological crisis, California was hit by another bout of extreme weather conditions from Thursday night through Friday morning.

Violent lightning and thunderstorms blew up the southern part of the state overnight, leading to flash flood warnings and reports of rockfalls and mudslides. And lightning storms in Northern California have already put massive forest fires and a few new ignitions in danger.

“We had a good storm around the area,” said Adam Roser, a meteorologist with the National Weather Service in San Diego.

A narrow area of ​​atmospheric instability and converging winds created the thunderstorm band that moved from San Diego and through parts of Los Angeles on Thursday night, officials said. At its peak, it poured half an inch of rain over the burn area of ​​the Bobcat fire in 10 minutes – creating flash flood warnings for residents in Monrovia and other nearby areas.

Roser said the system that powered the region deviated from the typical monsoon trail by moving away from the desert and occurring at night.

“In order for it to get into the valleys and the coast, it’s pretty important,” he said.

Heavy rain has also devastated the mountain roads in the Inland Empire and closed State Route 18 from Big Bear Dam to Snow Valley for several hours, according to the California Department of Transportation.

There were reports of lightning and rain as far as San Diego, and some residents of the drought-stricken state appreciated even the touch of rainfall.

“We are in a drought and on fire, we need this,” wrote one person on Twitter.

“I’m happy somewhere, someone in California got some rain,” wrote another.

In the LA basin, in the San Gabriel Mountains and in the eastern Antelope Valley, the probability of isolated thunderstorms remains until Friday, said the weather service.

A heat warning for the Inland Empire and the surrounding mountains has also been extended to Sunday and promises temperatures of up to 104 degrees. A heat warning has been issued for parts of Los Angeles County through Friday.

Mike Wink, chief of the Dixie Fire Department, said Thursday that the crews were facing “very, very worrying conditions” over the next day and a half, and many of those fears have come true: about 1,100 cloud-to-ground lightning strikes have occurred in the US registered state since Thursday night, officials said.

“We saw quite a few lightning bolts on this system,” said Cory Mueller, a meteorologist with the National Weather Service in Sacramento, “which was pretty unfortunate because despite these rain totals, which weren’t bad for September, they really weren’t enough, to suppress lightning strikes. ”

Lightning, showers and gusts of wind passed through the Tahoe Basin Thursday night, and firefighters were diverted away from the Caldor Fire to tackle multiple lightning fires across El Dorado County, California Department of Forestry and Fire Safety officials said.

At least one large fire, called the Kanaka Fire, grew to over 10 acres before the crews could stop its progress.

Firefighters were distracted by the Caldor fire to tackle multiple lightning fires across El Dorado County late at night. Lightning from severe thunderstorm cells that traversed the northwestern part of El Dorado County triggered the largest on Kanaka Valley Road in Rescue. pic.twitter.com/wo05Iz7JDz

More than a hundred cloud-to-ground lightning strikes also struck the Bay Area, which received a red flag warning of high fire hazard, including strikes in Santa Clara and Sonoma counties. A few small fires have been reported in the region, officials said.

Whether the wetness will affect the state’s worsening water scarcity, said meteorologist Ryan Kittell of the National Weather Service in Oxnard, don’t rely on it: most of the moisture should dissipate by the weekend.

“Every little bit helps,” he said. “But it’s kind of a drop in the ocean in the drought.”

Got a photo of Santa Monica that you want to share with Patch?