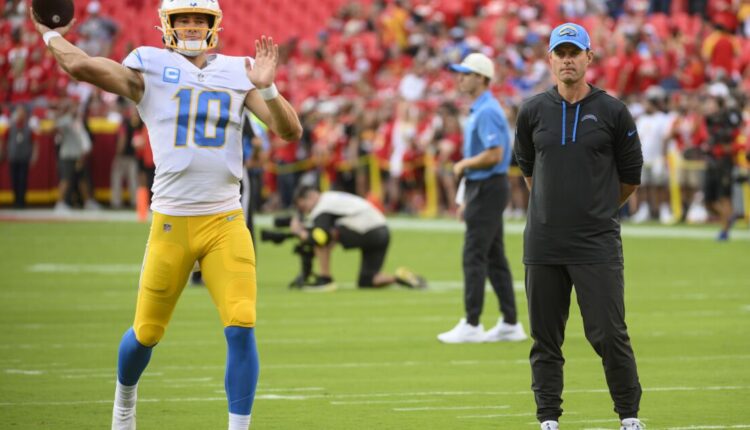 Congratulations to Brandon Stanley for leaving Justin Herbert. You managed to change all the headlines to that one decision rather than the extremely poor play and coaching against Jacksonville.

Is Brandon Staley having an identity crisis? Last year, his decisive, unapologetic coaching style probably cost them a playoff spot. This year, a lack of decisiveness — letting a 24-year-old QB make his decisions — may bring about the same result. When will this Chargers’ coaching curse end?

Justin Herbert should not have been in uniform Sunday. A possible championship team has been put in the hands of an inexperienced head coach, Brandon Staley. Coach Staley’s decisions on managing the team since he’s been in charge have shown his lack of readiness to lead the Chargers to a championship.

Unlike the implication by Ryan Kartje, the USC vs. Oregon State football game resembled anything but a “stinker.” The Trojans’ offense, used to move up and down the field at will, was not allowed to do so by the Beavers’ defense. The USC defense, also lacking appropriate respect, countered with a valiant effort. The result was a captivating, epic struggle featuring a dramatic final Trojans drive. Even though the final score was 37 points below the over/under, it was college football at its best.

Good teams will close games, even when the offense takes the night off. Can’t wait when everything clicks.

Caleb Williams needs to be told there is more to his position than NIL deals and the glitz and glamor of Los Angeles. It is being a man and facing the media after a poor performance, accepting criticism, learning and growing from it. That is what a real leader does.

The Bruins are back, and with a vengeance, after thoroughly dominating the once unbeaten and highly hyped boys from UW. Seems like QB Dorian Thompson-Robinson knew it all the time, with his intense and dominating play. Eight straight wins, dating back to last year.

Three of the best players in college football, with QB Thompson-Robinson, running back Zach Charbonnet and receiver Jake Bobo, combined with a raucous Rose Bowl crowd bore witness to the rejuvenated Bruins. This team is destined for greatness. Next stop, the top 20.

Chip Kelly’s Bruins finally proved they can beat a ranked team, as long as it throws two interceptions, fumbles and surrenders to safety.

With it being 26.2 miles from Westwood to Pasadena, would you say it takes a marathon effort by UCLA students to attend football games at the Rose Bowl?

So I ventured into SoFi Stadium for the first time for the Chargers game on Sunday and was impressed. However, the Chargers public-address announcer does not even acknowledge the other team. Even on an interception, the announcer would only mention the Chargers tackler. There are people at the game that want to know who carried the ball for the other team. John Ramsey must be spinning in his grave.

If the Dodgers are entertaining the notion of giving Craig Kimbrel a spot on the postseason roster, may I offer a little advice from a certain Disney movie: Let it go.

What does Kimbrel have on Dave Roberts? He keeps putting him in and he can’t win. He is a disaster.

Your minimum coverage of Roger Federer’s retirement was dismal. A small blurb for one of the greatest, if not the greatest, tennis player ever to play the game is unacceptable. He should have all the accolades he deserves, which are many. Shame on The Times sportswriters for not featuring the very moving tribute after his doubles match.

In reading Eric Sondheimer’s article about the misfortune of TA Cunningham, a lineman who transferred from out of state to Los Alamitos High, I learned something about the CIF’s change of residence guidelines. Eric wrote that the CIF policy states in part that “a student may not be eligible to participate at the varsity level if there is evidence the move was athletically motivated or the student enrolled in that school in whole or part for athletic reasons.” If that is the policy, it must be enforced very selectively. How else could the CIF allow multiple transfers to the Sierra Canyon basketball team from out of state, seemingly every year? Is it believeable to think that some of the nation’s best prep basketball players transfer to Sierra Canyon from other states for reasons other than athletics?

Thank you Albert Pujols and Aaron Judge for bringing some excitement, luster and class back to our national pastime.

The Los Angeles Times welcomes expressions of all views. Letters should be brief and become the property of The Times. They may be edited and republished in any format. Each must include a valid mailing address and telephone number. Pseudonyms will not be used.