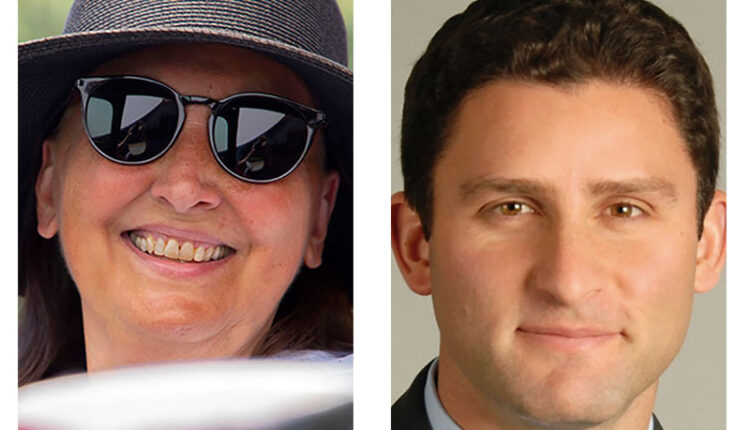 The new redistricting lines for State Assembly District 46 let go of Studio City and North Hills territory, but the district still proves to be a socio-economically diverse palace of residents stretching from Van Nuys to Calabasas.

Voters have consecutively elected Democratic candidates to serve District 46. But Caruso, who is not related to mayoral candidate Rick Caruso, isn’t worried about making the primaries because she is the only Republican on the ballot. After June 7, it’s full speed ahead for her campaign team.

The candidates share similar interests in education, homelessness and the climate crisis but have different approaches. Caruso knows these issues are bipartisan and hopes that Republicans will be encouraged to vote in the primaries. She’s adamant about not giving up on Republican voters, saying there’s a chance to make a difference in this dominantly blue-hued state.

On education issues, Gabriel has steered legislation toward trying to make higher education affordable for all students. He knows that many students fall through the cracks because parents are struggling but their income isn’t quite low enough to qualify for help, and those students can end up couch-surfing or living in their cars as they try to get their degrees.

Caruso has a stronger gravitational pull to primary and secondary education with a 20-year track record working in LAUSD, starting off in the cafeterias, then becoming a math teacher and eventually an assistant principal at North Hollywood High School. “The motto at North Hollywood High was if you want the job done right then get Caruso to do it,” she said.

According to Caruso, public education has lost its focus. She sees students receiving a high-school diploma who go to college unprepared for college-level math or writing courses. She believes California’s decision to end the California High School Exit Exam has contributed to students’ low scores on state tests and she disagrees with placing college students in remedial courses, saying such students will feel overwhelmed and eventually drop out. With that said, she’s eager to make legislative choices that she believes will rectify the losses in public education.

Gabriel and Caruso agree that the streets need to be safer. Gabriel cites patterns of hate-motivated violence in his communities targeted more toward the Asian Pacific Islander community because of the COVID-19 pandemic. He has also pursued efforts to protect Californians from gun violence. In February he introduced Assembly Bill 1929, which would provide Medi-Cal reimbursement for the Hospital-Based Violence Intervention Program, to expand funding for gun violence prevention efforts.

Caruso is a strong proponent of funding the police, especially in the school system. The Encino resident cited many times when she heard helicopters hovering over the area. And while working in the schools, administration and staff had to break up student fights. “We really have to get back to the business of education,” she said. “Our children deserve the best education possible and if you look at the ratings of a lot of the high schools a lot of the parents feel the schools aren’t safe,” she said.

Gabriel approaches his job as an assembly member like he does the parenting of his three children under the age of six, by giving things his close attention. He knows that residents from Canoga Park have diverse needs compared to residents from Calabasas.

“My responsibility is to serve everyone in my district,” said Gabriel. “I am really committed to make sure that California protects reproductive rights,” said Gabriel, especially considering the leaked draft opinion from Roe v. Calf. He serves on the Select Committee on Reproductive Health in the Assembly and received support from Planned Parenthood in his 2018 campaign for the legislature.

“Another huge priority is making sure that the Valley gets its fair share in transportation funding,” said Gabriel. He wants to make sure Los Angeles officials don’t leave out the San Fernando Valley when it comes to expanding measures for transportation services.

In terms of homelessness, both advocate for creating targeted approaches that intervene and prevent homelessness.

“We need to put our money into the mental health facilities to give these people a fighting chance. It’s a destruction of a workforce. They should be adding to society instead of living on the streets,” said Caruso.

Gabriel also looks to rent relief for tenants and landlords and creating affordable housing to stop homelessness before it starts. “We need more accountability on how the money is being spent in the community,” said Gabriel.

In terms of the climate crisis, they have different takes on possible solutions.

Caruso proposes to investigate ways to water plants with brown water and recommends studying other countries and their drought-tolerant moves that would help California, like turning the landscape back into a desert-scape.

“This is the desert,” Caruso said. “It’s green because we are watering it. Cutting and watering grass is an expense and it’s a waste of our resources.”

Gabriel remembers a few weeks after his 2018 election when the Woolsey Fire broke out and schools in the Calabasas area were shutting down. He remembers the record 120-degree summer day in Woodland Hills too. For Gabriel, its important that wildfires get addressed immediately, because if not, some of California’s progress to renewable energy gets wiped out with a single fire crisis.

While Gabriel has the advantage of being endorsed by the California Democratic Party and the Sierra Club and feels fortunate for the support of essential workers, Caruso is relying on her community of supporters to keep her afloat. She’s a member of the LA Hispanic Republican club and goes on a radio show on Saturday nights from 8 to 10 pm where she talks about her campaign issues.

She’s thrilled that Rick Caruso’s mayoral candidacy has highlighted her name. She calls it divine intervention and hopes to meet with him to work on campaign strategies.

ASSEMBLY DISTRICT 40 RACE AT A GLANCE

THE RACE: One Democrat, one Republican.

DanaCaruso: No contributions or expenditures reported