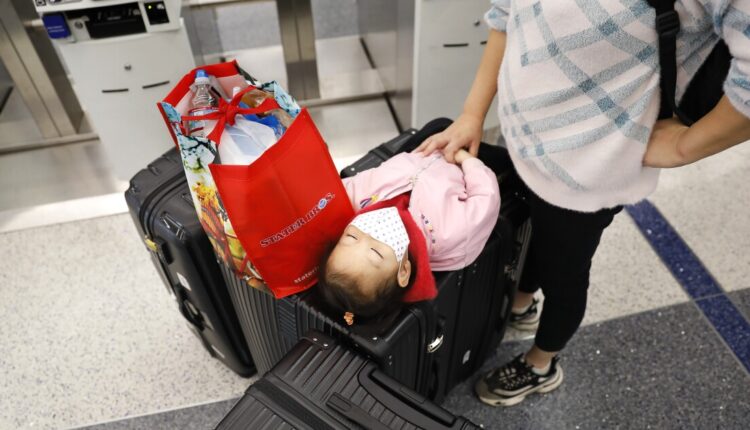 After a wave of flight cancellations over the holiday weekend, travel problems continued at Los Angeles International Airport on Monday.

Dozens of new flights were suspended as winter weather and staff shortages plagued the industry amid a surge in coronavirus infections.

According to Heath Montgomery, a spokesman for LAX, the cancellations hit “one of the busiest days” of the already busy vacation travel season. 188,000 passengers are expected at the airport on Monday. Passenger numbers are expected to decline gradually over the next few days, he said, before bouncing back to around 204,000 on Jan. 2 – one of the airport’s prime travel days for the month.

Tracking site FlightAware.com listed 116 cancellations at LAX on Monday – about 7% of the estimated 1,600 flights scheduled for the day. Travelers coming to or from the airport saw even more disruptions in their plans on Sunday when 119 flights were canceled.

There were also 381 delays at LAX, according to FlightAware.com, and Montgomery said they would last all day.

“It is important that people check their flight status as there are a lot of delays and cancellations,” he said.

Some canceled flights will appear on the departure board in the Delta Terminal at LAX on December 27th.

FlightAware recorded more than 1,240 flights canceled in, to, or from the United States on Monday, and more than 2,980 stopped worldwide that day. This is a slight improvement on the previous day, when there were 1,517 nationally and 3,274 cancellations worldwide.

The disruptions come as the highly transmissible variant of Omicron rises across California, contributing to a surge in coronavirus cases and hospital admissions, and coinciding with more people flying out to meet family and friends, possibly for the first time since the pandemic began almost almost two years. Travel has doubled and tripled at some U.S. airports compared to 2020, based on recent passenger screening by the Transportation Security Administration.

Some airlines have blamed the disabled operations on a rash of Omicron infections among airline staff, which cut staff numbers – already reduced by cuts in the pandemic era – during the vacation travel boom.

United Airlines has canceled 115 of 4,000 flights scheduled for Monday, and Delta Air Lines expects to cancel more than 200 of 4,166 flights, according to airline officials.

“The nationwide surge in Omicron cases has had a direct impact on our flight crews and the people who run our operations,” United said in a statement. “Therefore we unfortunately had to cancel some flights and inform affected customers in advance when they come to the airport.”

United spokeswoman Maddie King said the airline had contacted passengers early throughout the weekend if their flights were canceled to give them time to rebook or make other travel arrangements. She said about 50% of all passengers reached their destination sooner or within four hours of their originally scheduled flight.

Delta said the cancellations were partly due to coronavirus effects as well as winter weather in some parts of the country. The bad weather at the Delta hubs in Minneapolis-St. Paul, Seattle and Salt Lake City, announced the airline on its website.

“Canceling a flight is always Delta’s last resort,” said John Laughter, executive vice president and chief of operations for the company. “The result is not only difficult for the customers, but also for our employees who only want to take care of them – especially over the holidays.”

JetBlue reported 66 cancellations of 1,006 flights scheduled for Monday, “with the possibility of a few more depending on crew availability,” said airline spokesman Derek Dombrowski.

The Omicron variant-related outbreak of coronavirus infections among aviation industry employees is noticeable not only during the busiest travel time of the year, but also when airlines try to fill vacancies from mass vacations shortly after the pandemic began in 2020 became free.

Airlines have been hiring staff continuously over the past few months, but they are still below pre-pandemic levels. In October, they employed 9% fewer full-time workers than in the same month of 2019, according to the latest US Department of Transportation data.

Several major US airlines placed vaccine mandates on their employees months before the Biden government asked all companies that contract the federal government, including airlines, to do so.

With the rise in coronavirus infections, travel is skyrocketing in LA and across the country.

In eight of the last eleven days, TSA screeners have seen more than 2 million travelers at US airports. These numbers are below pre-pandemic levels, but are twice – and sometimes even triple – what they were in the same period in 2020.

An estimated 3.5 million visitors are expected at LAX between Thursday and January 3, approaching the 2019 level when 4.5 million travelers used the airport over the same period, airport officials said.

Last year, 1.85 million passengers traveled via LAX during the holiday season, which is almost twice as busy this year, officials said.

Sundays are typically the busiest days, a trend that precedes the pandemic.

“But that doesn’t mean we’re back to pre-pandemic numbers,” said Montgomery, the LAX spokesman, noting that the airport is still about 25% down about 25% every day from 2019 levels.

A pair of storms rolling over Southern California earlier this week is expected to prolong the area’s wet, rainy conditions, bringing heavy snow to higher elevation areas. Although winter weather has triggered warnings and closed roads in some areas, Montgomery said it won’t have a material impact on operations at LAX.

Since the airport is connected to many other airfields, it is more likely that major weather events in other parts of the country would affect operations.

“Anything that happens on the east coast will affect the west coast,” he said.

The Times author, Louis Sahagún, contributed to this report.