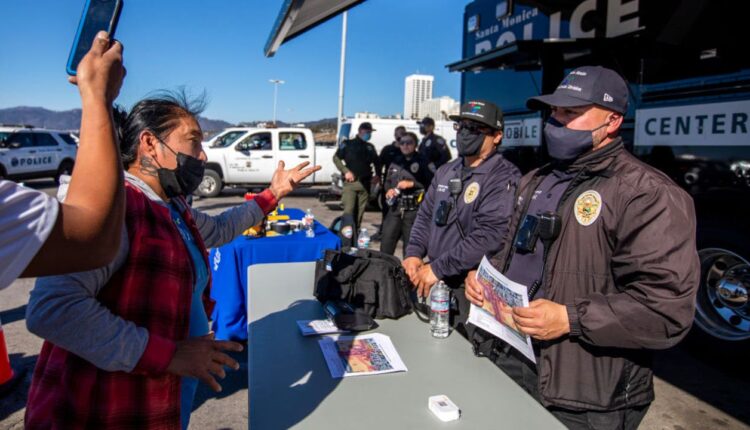 Grocery vendors gathered outside Santa Monica City Hall on Friday. Vendors who work around the Santa Monica pier and boardwalk say they have been “treated like dogs” and arrested by police in recent weeks. A city mayor says many arrests have nothing to do with vending machines.

SANTA MONICA, California. – Street vendors rallied outside Santa Monica City Hall on Friday afternoon, protesting the treatment by police and other officials in recent weeks, alleging that vendors working on and around the Santa Monica Pier and Boardwalk are being harassed, racially profiled, and were “treated like dogs”.

Those who gathered pointed to recent arrests of vendors as evidence of discrimination. While vendors without permits have received some arrests and subpoenas, those who gathered Friday say they tried to get a permit but failed.

A salesman who says he’s been working without a permit for five years says he’s struggled to get one. “We want to pay,” he said, but the cops, he says, “treat us like dogs. We’re not animals. We’re people.”

“What happened at the pier and what the city has responded to is a dangerous situation,” she said. “There were no arrests as a result of sales promotions. The last five arrests have all been related to unregistered firearms, attacks on other civilians and other vendors fighting for space. An attack on a peace officer. So there is illegal activity going on that came from the free-for-all.”

Get your top stories delivered daily! Sign up for FOX 11’s Fast 5 newsletter. And get breaking news notifications in the FOX 11 News app. Download for iOS or Android.

The Santa Monica Pier Corporation issued a statement to FOX 11 saying it supports the city’s task force’s efforts, saying in part, “We applaud the task force for continuing to educate and enforce safety regulations designed to ensure.” that everyone has a positive experience on the pier.”