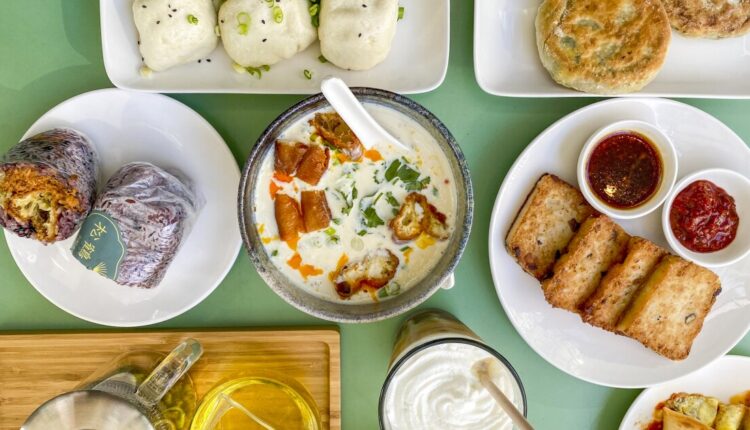 Vivian Ku’s purple sticky rice fan tuan is superb wakeup food. Cut in half, the thin cylinder reveals a center filled with a crackly youtiao, braised soy egg, pork floss and minced preserved vegetables hidden in its maze of fried dough. Each bite is both yielding and full of crunch. Ku modeled her fan tuan on the additions she favored for a quick breakfast during the stretches she lived in Taipei during her 20s.

“It’s part of the experience of living there because no one makes food at home,” she told me in an interview last year. “The home kitchens are tiny, and the street food is so affordable and so convenient. Everyone just goes downstairs.”

Fan tuan may be designed for eating on the move, but I learned this week the rice roll is also wonderfully enjoyed at a table in a calm setting with some chocolatey cold brew or floral Taiwanese tea.

Ku runs the treasured Pine & Crane in Silver Lake; in June, she opened the restaurant’s second location in downtown LA at the base of a new mixed-use building on South Grand Avenue. Lunch and dinner options reiterate the light-handed Taiwanese dishes served at the flagship and include a few that draw from Joy in Highland Park, her third restaurant. There are garlicky, vinegary vegetable salads; three-cup chicken perfumed with basil; hoisin slicked beef roll; lu rou fan (minced pork over rice with soy egg); nourishing wonton soup; and Hakka mochi rolled in black sesame and peanuts, a favorite dessert of Ku’s father.

It’s mornings at the new outpost that I’m most excited about, though. The am menu revives many of the Taiwanese breakfast staples that Ku and her crew mastered at the Today Starts Here takeout popup, which operated in Chinatown from September 2020 to June 2021. I’ve missed those specialties — though similarly excellent versions are always available in the San Gabriel Valley, particularly at Huge Tree Pastry in Monterey Park.

Today Starts Here has been on my mind a lot recently for an obvious reason: It vacated the space in a 1930s-era building now occupied by Johnny Lee’s Pearl River Deli, the radical Cantonese restaurant I reviewed this week. I’d walk underneath the red lanterns that float over the ceiling now and then, and I’d be anticipating one of Lee’s Macau-style pork chop buns… but I’d also feel a twinge of longing for a fan tuan.

Eat your way across LA

Get our weekly Tasting Notes newsletter for reviews, news and more.

Now they’re available five days a week. Pine & Crane’s downtown location opens at 8 am Thursday through Monday. The mod dining room — which opens onto a sunny, spacious patio — can be quiet so far on weekday mornings. Friendly staffers encourage lingering.

The fan tuan is as energizing as ever. So is the bowl of soy milk, similarly garnished with still-crisp hunks of youtiao, pork floss, preserved vegetables and scallions with drizzles of vinegar and chile oil. The acid works its coagulation alchemy, slowly transforming the milk into silken tofu. Pair it with palm-size savory pies stuffed with scrambled egg, chives and vermicelli noodles, or daikon rice cakes freckled with diced shiitakes and crowned with fried shallots. Flavors are meant to be customized; use the chile oil and soy-garlic sauce on the side liberally. 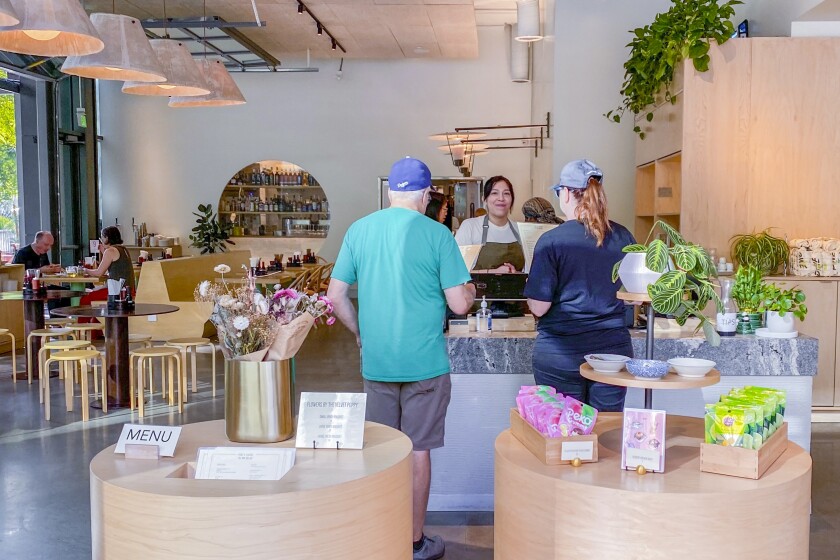 If you’re ordering something to go, consider the “thousand layer” pancake with egg, chile sauce, basil and a thin veneer of melted American cheese that binds the flaky layers together. It’s ideal walking food. Ku also serves the dish during afternoons and evenings at Joy, but I prefer it for breakfast.

If you’re sticking around, home in on the range of Taiwanese oolong teas — from delicate, almost buttery shan lin xi to smoky-rich dong ding roasted over charcoal. Few restaurants invest in proper brewing equipment, but this one does. A timer, a steeping pot with a plunger, a decanter and a cup: It’s not complicated, but it makes such a difference. The tea service, as much as the breakfast and the relaxed scene, persuades me to keep returning. 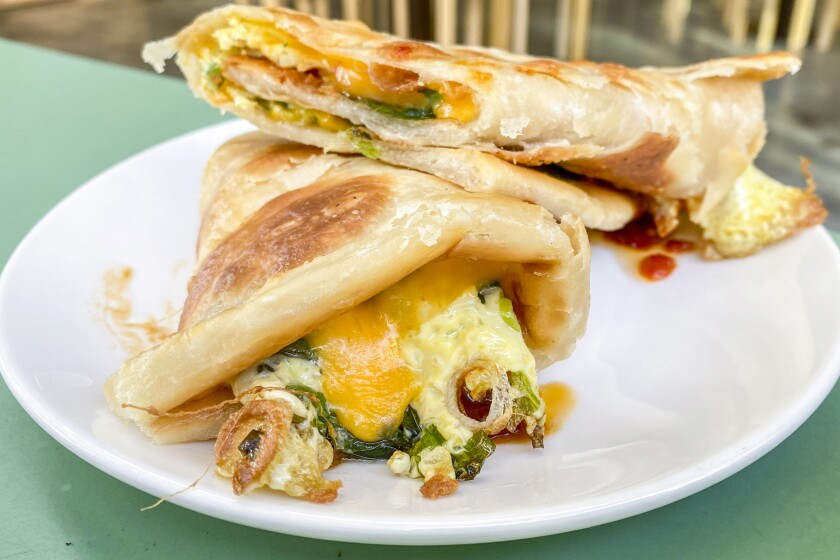 Thousand layer pancakes with egg, cheese and chile sauce at the new location of Pine & Crane.

— The headline from Jenn Harris’ latest installment of weekly recommendations says it all: “The $74 cheesecake at Jose Andres’ new restaurant doesn’t care if a recession looms.”

— Heavy Handed, one of LA’s essential burger pop-ups, will open its first restaurant this fall. Stephanie Breijo has the details.

— Jonah Valdez reports on Din Tai Fung in Glendale leaving Americana at Brand after 10 years for the mall’s Galleria competitor. 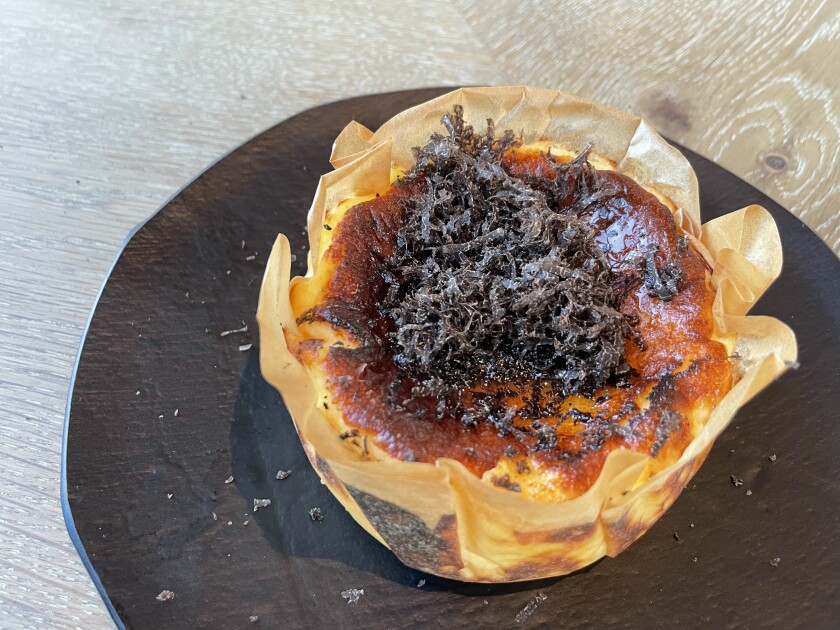 The cheesecake with a truffle supplement at San Laurel, Jose Andres’ new restaurant at the Conrad hotel in downtown LA