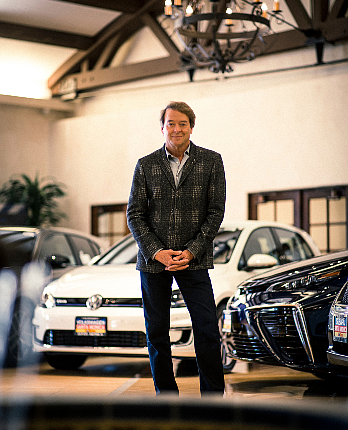 With more than six decades of experience in the highly competitive auto dealership category, Sullivan Automotive Group has learned a lot about adapting to challenging times.

The Hawthorne-based company, better known as LAcarGuy, has drawn on its extensive knowledge to help mitigate the impact of the pandemic on its business.
LAcarGuy reported sales of $ 837 million for 2020, a decrease of nearly 20% from 2019, according to estimates by the Business Journal. It ranks number 30 on this year’s list of Los Angeles County’s Largest Private Companies.

The decline, which illustrates the volatility of many local businesses over the past 18 months, could have been even greater without the experienced leadership of the LAcarGuy team.

Chief Executive Mike Sullivan said the company focused on digital sales and home deliveries in the early days of the pandemic, when LAcarGuy was considered a key company and allowed to work with a 25% staffing capacity.

“We did really well there,” said Sullivan of the company’s move to alternative sales platforms. “We did 350 (car sales) of all the stores in a month and we really thought we had something.”

Sullivan’s father, Wilfred, founded the company in 1964 and sold Volkswagen in Santa Monica. In 1976 he took his son on board.

While the last year and a half – with Covid-19 closings, social justice protests, and a global microchip shortage – has been unlike anything Sullivan had ever seen, that doesn’t mean he couldn’t adapt.

“Forty-five years were never predictable,” said Sullivan. “The auto business has always had these fluctuations. So if you couldn’t take it, you wouldn’t do it for this time. “

Social justice demonstrations last year took a toll at LAcarGuy’s Toyota dealership in Santa Monica. In addition to the business interruption, the dealership had 23 cars stolen and its showroom was damaged for $ 400,000.

An interruption in the global microchip supply chain due to Covid shutdowns, as well as a fire in March and an earthquake that struck one of the world’s largest suppliers in Japan, forced Sullivan to shift the focus of his team to used vehicles. The move was intended to sustain the dwindling inventory of its properties and reduce the need to sell new cars.

After slashing his initial vehicle surplus from the early days of the pandemic, Sullivan decided to increase the used car payouts to attract new customers and offset rising new car costs. “If your car is worth $ 4,000, we’ll pay $ 5,000,” he said. “We have learned how to offset that slightly rising new car price with a slightly rising used car price, and consumers are not confused.”

Sales at Sullivan’s Santa Monica dealerships remained at around 55% -60% of previous levels through March, when the city fully reopened. And now he’s preparing for further delivery delays as the microchip deficiency is slowly being resolved.

Despite losses in 2020, which he believes were in the millions, Sullivan has reduced its workforce to 665 employees, about two-thirds the number the company had before the pandemic.

And he plans to open a 14th dealership soon. “We are preparing for the electrical transition, which will be a very real transition,” said Sullivan. “Right now the profits are good and that’s because the margins have gone up because the product has gone down. We are a supply-demand business. My focus is on maintaining market share. ”