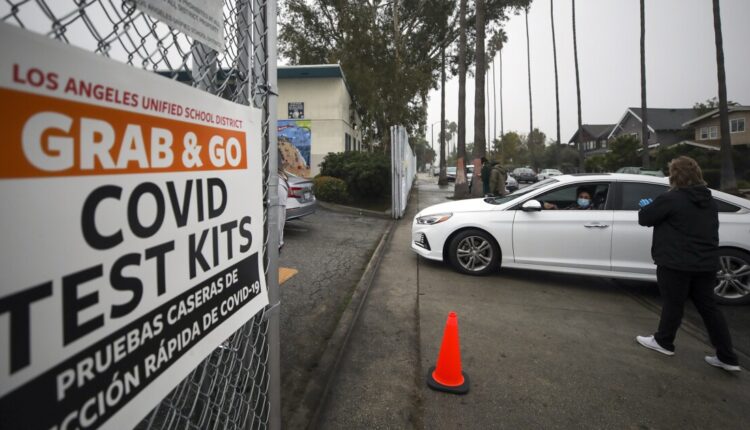 Hundreds of thousands of Los Angeles Unified students return to campus Tuesday from winter break amid a record spike in coronavirus cases testing the carefully crafted plans of educators in the country’s second largest school district to keep classrooms open in stressful conditions .

LA Unified officials are gearing up for staff shortages, high student absences, and long lines to enter campus for the multitude of students likely to need coronavirus testing in order to meet the district’s requirement that everyone enter the school premises would like to have to submit a negative test.

About 15% of the more than 400,000 tests submitted between January 3 and January 9 were positive, according to the district’s data.

The numbers are still in flux. Approximately 82% of the district’s 450,000 students had their test results uploaded by Monday afternoon, meaning thousands could come to school Tuesday morning who still needed a test. Schools hope to have enough rapid antigen tests available for students to attend class, said Dr. Smita Malhotra, the district medical director. In cases where they are not available, students can be referred to district locations for PCR testing, but the results will take approximately 24 hours.

District officials said the comprehensive security protocols the district has adopted prepared them for a moment of pressure on schools across the country as they work to ensure that students learn in person.

LA Unified holds a unique position among school districts with the largest weekly coronavirus testing program in the country, a massive effort that tests every student and employee – more than 500,000 people – every week. The program is key to the school district’s ability to identify positive cases as soon as possible in order to stave off outbreaks.

“Omicron is really testing the infrastructure and capacity of school districts,” said school board president Kelly Gonez. “We are fortunate to have a strong foundation that prepares us for this moment.”

Some students and staff who tested positive early last week may be able to return to campus on Tuesday if six days have passed since the result and they test negative, among other things.

However, due to the large number of cases, it is likely that schools that have already struggled with teacher and substitute shortages will be confronted with additional staff shortages. To fill the gap, the district is preparing to deploy approximately 4,000 administrators, certified staff and other staff, officials said.

“We know there is concern and we’ve added the extra layers of protection for going back to school,” she said. “We know that opening schools under these circumstances is associated with bumps.”

In addition to testing requirements, the district will continue to maintain previous security measures, including indoor and outdoor coverage and improved air filtration systems. About 90% of eligible students have been vaccinated, district officials said.

In a statement, Cecily Myart-Cruz, president of the LA Teachers Union, said: “LAUSD is in a better position than most in the country because of the security infrastructure that educators and families have fought and won for during this pandemic.

“The terrain is changing day by day, and educators will continue to prioritize the health and safety of everyone in our educational community,” she said.

At San Pedro High School, principal Steve Gebhart said Monday he knew about a dozen of 127 teachers who would be absent on the first day due to coronavirus infections.

While preparing for these classes to be covered by proxy, it will be “essentially all deck staff” with teachers being asked to take over the lessons during their planning periods.

“The hope is that we will cover it in a relatively traditional way,” Gebhart said. “I am carefully prepared for this,” he said of the return of the students. “The unexpected is expected, so we’re pretty good at dealing with things by now.”

Gebhart also expected large numbers of students on his 2,850 campus still to need a coronavirus test – and they could miss the first day of school while waiting for the results.

Teachers also need to be willing to change their lesson plans if part of their classes is missing, Gebhart said. But with guidance that aims to emphasize mastery of learning rather than strict grading rules, he hopes teachers will feel less stressed from missing class days.

At the Edward Roybal Learning Center, headmistress Blanca Cruz said she also prepared teachers by coordinating backup classroom supplies in case a teacher needs to be isolated at home.

The Roybal librarian is working hard to create backup plans for various subjects at all grade levels in the event that assistants have to step in as substitute teachers, Cruz said.

“We all had to get together to make sure our people were ready,” she said.

More employees will also report to the school locations tomorrow to cover bottlenecks, she said.

“We feel very ready for this,” said Baez.

School board member Nick Melvoin said the next few weeks are likely to be challenging. But he believes there is now widespread recognition in the community that school closings were bad for children, and widespread support for keeping campus open.

“The consensus that has emerged is that schools must be open when bars and card rooms are open,” he said. “That is a consensus that did not emerge in the first year of the pandemic.”

The Times data journalist Iris Lee contributed to this story.