LA on the Record: Welcome to Wipeout Week 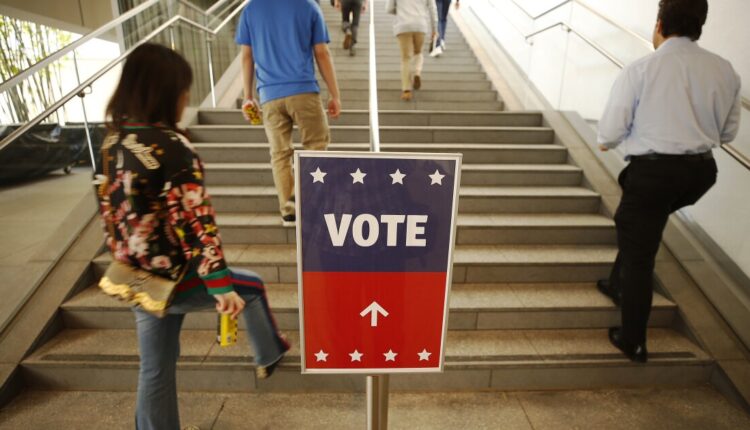 Good morning, and welcome to LA on the Record — our new local elections newsletter. It’s David Zahniser and Benjamin Oreskes coming to you live from Los Angeles, with some help from Dakota Smith, Alejandra Reyes-Velarde and Julia Wick.

We’ve finally reached Wipeout Week at City Hall! For those who aren’t aware, that’s the period in the run-up to an LA city election when at least a few engaged citizens discover just how tough it is to gather the 500 voter signatures needed to get on the ballot.

Staffers in the City Clerk’s office have been producing regular updates on the situation, revealing who succeeded in qualifying for the ballot, and who wiped out. The office has until the end of next week to finalize the list of candidates, said spokesman Josue Marcus.

Ten mayoral candidates have qualified so far, and all the big names are locked in. But it’s still not known if business executive Craig Greiwe, a political newcomer who turned in his petitions on the day of the deadline, secured enough signatures to appear on the June 7 ballot.

Things are also in flux in the down-ballot races.

In South LA’s District 9, former City Councilman Nick Pacheco abandoned his effort to get on the ballot in hopes of unseating Councilman Curren Price. Pacheco, who served from 1999 to 2003, said he realized a day before Wednesday’s deadline that he wouldn’t have the signatures.

“There was no point in turning them in,” he said.

For now, that leaves Price with a single opponent: college administrator Dulce Vasquez. Petitions for two others are still being reviewed.

On the Eastside, just two people have qualified so far in Council District 1: two-term Councilman Gil Cedillo and public policy advocate Eunisses Hernandez. If the third prospective candidate, filmmaker and crisis responder Elaine Alaniz, fails to make the cut, the district will be left with a two-person race — one that almost certainly will be decided in the June primary.

That scenario could make the campaign a bit more challenging for Hernandez, who is known for her work on Measure J, the 2020 county ballot measure. If she were in a three-candidate race, she would have an opportunity to force the incumbent below 50%, triggering a November runoff and giving her more time to get her message to voters.

A similar scenario is playing out in the northeast San Fernando Valley, where just two people have qualified for the District 7 race: Councilwoman Monica Rodriguez and community advocate Elisa Avalos. If a third potential candidate, volunteer public advocate Reuben Garcia, doesn’t qualify, that race would be decided in June.

The waiting game is also playing out in the West Valley, where Councilman Bob Blumenfield is the only candidate to make the ballot so far. If his two rivals fall short, he will face no opposition to his bid for a third and final term — assuming there’s no write-in candidate.

Candidates in LA face a much tougher time getting on the ballot than their counterparts in Los Angeles County political contests. Those who run for a seat on the Board of Supervisors — whose districts each have about 2 million people — need to turn in just 20 valid signatures, plus pay a fee, according to the Registrar-Recorder/County Clerk. The same is true of candidates for county sheriff and superior court judge.

Two years ago, 18 people who hoped to run for City Council or school board failed to make the ballot, a failure rate of around 35%. Many waited until the last minute to turn in petitions, leaving no time to go out and try again.

By the end of next week, we’ll know how many of this year’s crop learned from their predecessors’ mistakes.

— HEY, BIG SPENDER: He’s been in the mayor’s race less than a month. But real estate developer Rick Caruso has “made or incurred expenses” for his campaign that exceed $3.3 million, according to a notice from the city’s Ethics Commission. That outlay is huge when compared with his opponents. And it means that those other candidates, most of whom have agreed to accept public matching funds for their campaigns, will be permitted to spend greater amounts than previously allowed.

Caruso spokesman Peter Ragone confirmed that the campaign broke the donation and spending limit, saying it now has 2,000 contributors and 1,000 people signed up to volunteer. Their email list has about 200,000 subscribers, he said.

— TRAVEL TIME: Councilman Joe Buscaino has been in office for a decade and, during that time, used his officeholder account to take his family on several of his city-related trips. The Times’ Benjamin Oreskes and Maloy Moore found that Buscaino had spent nearly $65,000 from that account — which is funded from political contributions — taking his family to Hawaii, Italy and other destinations. Officeholder accounts exist to help fund council members’ office operations and constituent services, and cannot be used for campaign purposes.

— HOLLOW PROMISES? Several candidates for mayor have voted to grow the LAPD. But fulfilling those promises won’t be easy, thanks to a bottleneck in the hiring process that has throttled recruitment at the department since the start of the COVID-19 pandemic. Oreskes and Kevin Rector report that the LAPD, which is authorized to have 9,700 officers, remains well short of that number and is now backsliding.

Plus: Los Angeles Magazine’s Jon Regardie also offers his own look at this phenomenon.

— NATO, UKRAINE AND THE DSA: Councilman Mitch O’Farrell and several other candidates have taken aim at the Democratic Socialists of America over its response to the Russian invasion of Ukraine. DSA, whose LA chapter is looking to unseat O’Farrell and elect labor organizer Hugo Soto-Martinez, denounced the invasion. But it also called for the US to withdraw from NATO, saying the nation’s “imperialist expansionism” set the stage for the conflict. O’Farrell called that stance “dangerous.” Soto-Martinez, in turn, said he doesn’t believe the US should pull out of NATO during the Ukrainian invasion.

— The DSA also came up this week in the Westside’s 5th Council District. Candidates running to replace Councilman Paul Koretz were asked during a candidate forum whether they would accept the group’s endorsement. Four candidates said yes — “I’ll take any endorsement I can get,” said educator Jimmy Biblarz — while two others, attorney Sam Yebri and real estate agent Kristina Irwin, said no. Yebri said afterwards that he disagrees with the group’s positions on Ukraine and Israel, and its calls to “abolish” the police. Irwin said the group’s views do not align with hers.

— RUSSIAN DIASPORA: Meanwhile, The Times’ Sarah Parvini reports that some Russians in Los Angeles are worried they will be associated with, and blamed for, Putin’s incursion despite having left their homeland years, if not decades, ago.

And in non-campaign news …

— PERJURY CLAIM: A lawyer who pleaded guilty to a bribery charge in the federal probe targeting the Los Angeles Department of Water and Power has accused City Atty. Mike Feuer of perjuring himself during a 2019 deposition dealing with the DWP billing scandal. The allegation is contained within a state bar complaint that targets fire.

Rob Wilcox, a spokesman for Feuer, disputed those claims, calling them “a malicious attempt by a confessed felon to deflect attention from his own criminal conduct.” (Wilcox, by the way, is also on the campaign trail this year, running to replace City Controller Ron Galperin.)

— RENAMING: A City Council committee backed a proposal this week to rename the Venice Pier as Ruth Galanter Venice Pier. Galanter, who served on the City Council from 1987 to 2003, represented part of the Westside and later — thanks to the miracle of redistricting — the east San Fernando Valley. (One of her aides was Mike Bonin, who went on to join the council a decade after she stepped down.)

— RENTER PROTECTIONS: Three members of the Los Angeles City Council — Bonin, Nithya Raman and Marqueece Harris-Dawson — have proposed a package of renter-protection measures, including a move to prohibit landlords from checking a tenant’s credit. Bonin said the proposal would make it easier for homeless people to find housing.

Around the horseshoe and beyond

Who should oversee LA’s 10th District? Next week, a judge may offer at least a partial answer, ruling on whether former Councilman Herb Wesson is legally permitted to serve as a temporary replacement for Councilman Mark Ridley-Thomas, who is currently suspended and fighting corruption charges.

The city’s lawyers have argued that putting in Wesson, a termed-out council member, would keep the council from installing someone who could get an unfair leg up during the next election for the seat. But it turns out there’s at least one other former councilman who is eligible to fill the seat who isn’t yet termed out: Nate Holden.

Holden is 92, still lives in the district and has free time on his hands. He retired from his job as an administrative law judge in December. And he has some thoughts about the ongoing drama in the 10th.

Holden says the council should not have suspended Ridley-Thomas, saying he’s innocent until proven guilty. Wesson, he said, doesn’t appear to be eligible for the interim post, since he’s already served three terms. “It’s a messy situation,” he added.

Holden said he’s open to filling the seat temporarily, as long as Ridley-Thomas could come back after resolving his legal issues. And he’s heard the remarks about how he’s too old to fill the seat — and wants that notion put to rest. “I’ll hand wrestle anybody on council today, and we’ll see who’s old or not old,” he said, Chuckling. “Because they would lose.”