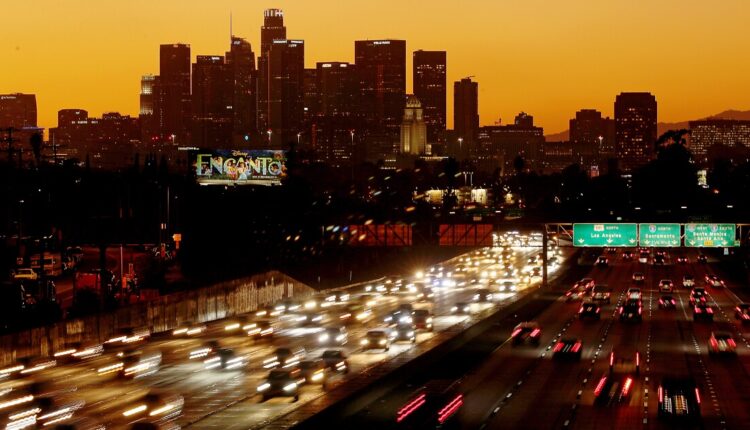 The next mayor could radically change how Angelenos move through traffic-choked streets and highways. Not only will the person be charged with framing the city’s near $12-billion budget, where funds for fixed potholes and crosswalks come from, but the mayor will also control four seats on the 13-member board of the Los Angeles County Metropolitan Transportation Agency. The agency, with its nearly $9-billion budget, decides how often buses run, where rails are built and how much it costs to get on them.

The city may be the nation’s capital of car culture, but pressure is building to get more people out of their emission-spewing rides. The next mayor will grapple with issues like whether to widen freeways or implement congestion pricing. And as new ways to move emerge, that person will likely make decisions about air taxis, delivery robots and even a gondola to Dodger Stadium.

While the executive role is limited in Los Angeles, the mayor has the power of his appointments to commissions and departments — and the bully pulpit to promote his agenda.

One of Mayor Eric Garcetti’s biggest wins was the passage of Measure M, a half-cent sales tax that gave Metro $120 billion in funding over four decades. He helped create Urban Movements Labs, a private-public partnership that works on speeding up adoption of new forms of mobility like air taxis and delivery robots. And he introduced Vision Zero to end pedestrian deaths, although that has fallen short of its goals.

Ridership on Metropolitan Transportation Authority trains and buses plummeted during the pandemic, and while it is beginning to bounce back, the number of people boarding has been sinking for a decade. Violent crime has hit alarming highs on the system, where passengers regularly report people smoking drugs, defecting on trains and using the system for shelter. Earlier this month, a homeless woman set a passenger ablaze, and at Union Station, janitors are frequently assaulted by mentally ill people living at or near the station. Metro leaders think more commuters will make the transit system safer and feel like less of a dark alley.

Climate change is creating ever more urgency for the agency. Mass transit may be the region’s best hope for cutting greenhouse emissions in car-loving Los Angeles. The agency is pouring billions of dollars into expanding rail lines that crisscross the region. But other forces, particularly high housing costs, could be pushing some low-income riders away from the city core to areas with less bus and rail service.

The Los Angeles Times talked to five candidates, just weeks away from election day, to hear their top priorities and views on pressing issues like congestion and freeway widening. Candidate Rick Caruso, the developer of tony shopping malls and resorts, was the only major candidate not “ready” to talk to the Times about the topic yet.

When asked her priorities, Bass said, “number one, two and three are safety, safety and safety.”

“To me, one of the biggest issues, making sure that the system is comfortable, so that we can increase our ridership back up,” said Bass, who polls show is in a tight race with Caruso for the lead. To do that she would add more law enforcement and social workers on trains and buses. A former community organizer, she has taken heat over her support for hiring more police when many of her progressive colleagues are calling for less. But, she said it’s necessary to take another look at the Metro police contract has with the Los Angeles County Sheriff’s Department, Long Beach Police Department and the Los Angeles Police Department.

“There are three different agencies for safety,” she said. “That just doesn’t seem functional to me.”

Sheriff Alex Villanueva has threatened to pull out of Metro if his department doesn’t get the full contract that will soon be expiring. The coming fiscal year, law enforcement will cost the agency about $170 million.

The next mayor is likely to have to make key decisions about how to fund security. Metro is proposing doubling funds in this year’s budget for uniformed “ambassadors” aimed at de-escalating mental health situations on the system and making riders feel more secure. It’s also pouring money into homeless services. The approach is one advocates want to see replace armed officers.

During an interview, Bass framed transportation issues around equity.

“We know that one of our fundamental problems in LA is income inequality, the difference between the rich and the poor and the disappearing middle class. And when we go about our environmental goals or transportation goals, can’t we address some of those economic problems that are there?” she asked. “I see all of that as job opportunities.”

“We have to make people in certain neighborhoods know those jobs are available. Know those business opportunities are there.”

De León, who is trailing Bass and Caruso, is the only candidate with a platform on transportation and points out that he authored the state legislation that allowed for Measure M. The funds will allow the agency to double its rail system and improve highways and streets . De León backs more foot patrols around transit stations to make them safer, but he said Metro has larger problems.

“It doesn’t take people from where they live to where they need to go,” he said.

De León is proposing streetcars that feed into already walkable areas like Hollywood and Koreatown, free transit for seniors and those under 25, and more frequent buses. He also wants to speed up projects like the Sepulveda Transit Corridor, a proposed rail line that would connect the San Fernando Valley and the Westside.

“Working people who live in the San Fernando Valley, the fastest growing region in the city, they can access just two of our city’s 98 rail stops,” he said.

Making public transit more attractive to middle-class riders would increase users and cut pollution. He often cast the conversation around the environment.

“If we want to breathe clean air, we need to get people out of their cars and into zero-emission public transportation,” he said.

Los Angeles has some of the worst air in the nation, much of that caused by cars and trucks on clogged freeways and roads. The dependency on cars is clear in Metro’s own ridership numbers. The system has largely been one of last resort, used by the city’s poorest. An estimated 62% of riders earn a household income under $20,000, and 72% don’t have access to a personal vehicle.

“You cannot have a transportation system that is almost entirely for the working poor of LA It’s not financially feasible,” he said. “We need to urgently accelerate our infrastructure projects to create the next generation of public transportation riders.”

Caruso, who made his personal fortune on upscale shopping malls and developments, supports hiring 1,500 new police officers and 500 mental health and addiction caseworkers. In written interviews with transit advocates published on LA Taco he said “to increase ridership we need people to feel safe and we need reliable service.” He’s also hinted that he’s unhappy with Metro’s multiple rail projects under construction and in planning.

“We’ve invested tens of billions of dollars, and we have an enormous amount of proposals for doing things that in my opinion, don’t make sense,” he said during a mayoral debate at Cal State Los Angeles earlier this month.

Caruso, who became well-known in Los Angeles for the Grove and the Americana at Brand, and his staff have declined to answer what projects don’t make sense. But he has waxed publicly about his admiration for monorails.

In 2010, when he told Bloomberg he was flirting with the idea of ​​running for Los Angeles mayor, he talked up a monorail along Interstate 10 from downtown Los Angeles to the coast going up faster than a planned “subway to the sea.” That subway, the Expo Line, which runs from downtown to Santa Monica, was completed in May 2016.

Gina Viola: Metro free for all

Progressive candidate Gina Viola, who has run on a platform of defunding the police, said she wants to divert law enforcement dollars in the city toward projects like shutting down streets for pedestrians and bicyclists. She wants to see fewer traffic lanes and more investment in hydrogen fuel cell infrastructure to reduce greenhouse alleys. She also wants Metro to be free for all. She points out that unlike other top candidates, she regularly takes the Metro subway.

Former Metro board member and candidate Mel Wilson said he would push to encourage more affordable housing along Metro’s right of ways. He noted that he championed transit-oriented development as a former board member. And he said there are easy fixes that should vastly improve how we move, including synchronizing intersections and metering, along with staggering work schedules.

Bass thinks shifting work schedules could be an alternative to congestion pricing, which was most famously used during the 1984 Olympics to reduce jams. At the time, deliveries were pushed to early morning and evening hours, many private companies offered staggered schedules, and state employees were encouraged to work a compressed four-day work week.

Metro has been looking at ways beyond the surge pricing along HOV lanes that congestion pricing could be implemented. One study by the Southern California Assn. of Governments suggested that charging drivers to enter an area of ​​West Los Angeles and Santa Monica could significantly reduce rush-hour traffic jams. That’s an approach taken in London and Stockholm, where those entering the central city during peak times must pay a toll.

Congestion pricing is considered one of the best ways to reduce traffic, but none of the candidates wanted to fully support that approach until there was an alternative for low-income residents that it could hurt most. Direct cash assistance for some residents would offset the impact, UCLA researchers recently found in a study.

The talk on transportation, perhaps the one policy area where the mayor will have considerable influence, is a bit underwhelming to Daniel Tabor. The former Inglewood mayor and board president of MoveLA, was one of the transit groups that posed questions to the candidates. He knows a lot about what it takes to get voters behind transit projects. MoveLA campaigned for Measure R and Measure M, now the largest sources of revenue for Metro.

“Transit is an issue that impacts a lot of other ills in our city right now,” he said. “All the candidates want to see LA to be a world-class city, but it won’t happen unless there is a reliable, fully developed transportation system.”