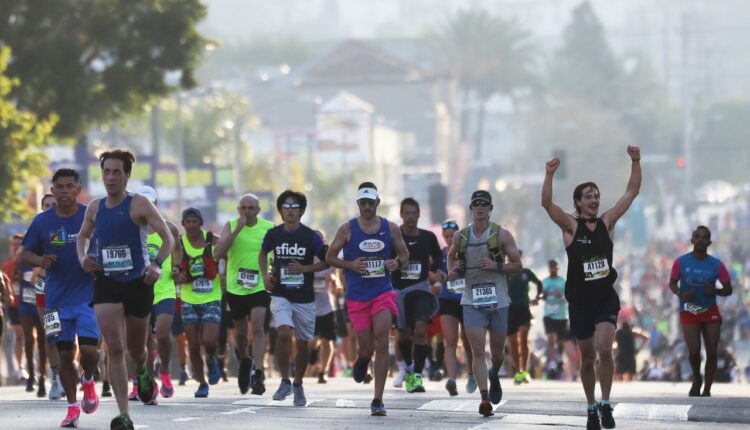 The 2022 Los Angeles Marathon returns March 20 with a 26.2-mile course lined with entertainment.

The last marathon was held later than usual, on Nov. 7, because of the COVID-19 pandemic. The race debuted the marathon’s new “Stadium to the Stars” course, which begins at Dodger Stadium, runs through West Hollywood and Beverly Hills before ending on Avenue of the Stars in Century City.

This year, the 37th running of the marathon will be held on its customary date for the first time since 2020. It will follow the same course.

How to watch the marathon live

KTLA Channel 5 will have exclusive live coverage of the event, starting from 6 am until 11 am on Sunday, March 20.

Viewers can also watch the race on KTLA.com, the KTLA 5 News app, KTLA’s YouTube, Hulu or KTLA+, which can viewed on the KTLA+ app on Apple TV, Roku, and Firestick.

What time will runners start?

The main event will begin with the wheelchair start at 6:30 am, followed by the pro and elite age group for women at 6:40 am and then the pro men and full field at 6:55 am

Results will be available here on LA Marathon’s website.

The marathon will begin at Dodger Stadium and finish at Avenue of the Stars in Century City.

The course will wind through downtown LA, Little Tokyo, Hollywood and other areas. It will follow its traditional route until Brentwood, where runners double back on San Vicente, Sepulveda and Santa Monica Boulevard before finishing at Avenue of the Stars.

The change is meant to allow for a more vibrant finish and provide the opportunity for more spectator participation.

Where can spectators watch the finish line in person?

For those hoping to get an in-person look at the finish line, organizers say spectator access will be limited on Avenue of the Stars from Santa Monica to Constellation Boulevards.

Spectators who want to watch runners cross the finish line will need to head to the area of ​​Santa Monica Boulevard and Avenue of the Stars near the bleachers.

Kelly’s Lot, led by marathon runner Kelly Zirbes, will perform on top of a flatbed truck near the start of the race, then move to Sunset and Fairfax to finish with a set of running songs near the finish line.

Las Colibri, an all-female mariachi band, will be performing at Hollywood Boulevard and Western for a Women’s History Month tribute.

The Beatunes, A Beatles cover band will be playing live on the entertainment stage at the intersection of Hollywood and Vine.

Outside the Dolby Theater, race photographers will be lined up — paparazzi style — as runners pass alongside the Giant golden statues for a “Red Carpet Oscars Experience.”

At the Classical Corner on Wilshire and Rodeo in Beverly Hills, there will be a “Mellow Mile” of acoustic music from soothing sounds of YOLA. 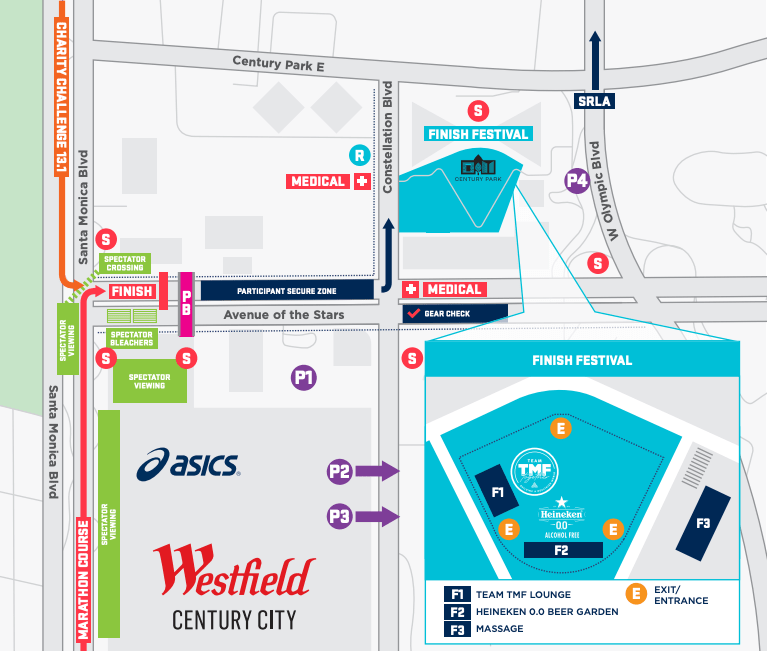 A map of the Finish Festival.

The final miles will feature The Tribe performing a set of “One Hit Wonders,” Doug Legend and the Zydeco Party Band, 1969 Band, the Wayback Daddies, as well as circus performers, aerial dancers, stilt walkers, jugglers, hoop dancers and ball walkers.

The Official Finish Festival will be held at Century Park on 2000 Avenue of the Stars from 9 am – 2:30 pm

The beer garden opens at 10 am

The course will be closed to vehicular traffic for 6 hours and 30 minutes beginning after the last runner crosses the start line. The course will then reopen to traffic on a rolling basis.

More information on road closures can be found here.

What’s behind the ‘Great Resignation’ of California lawmakers? | State and Regional