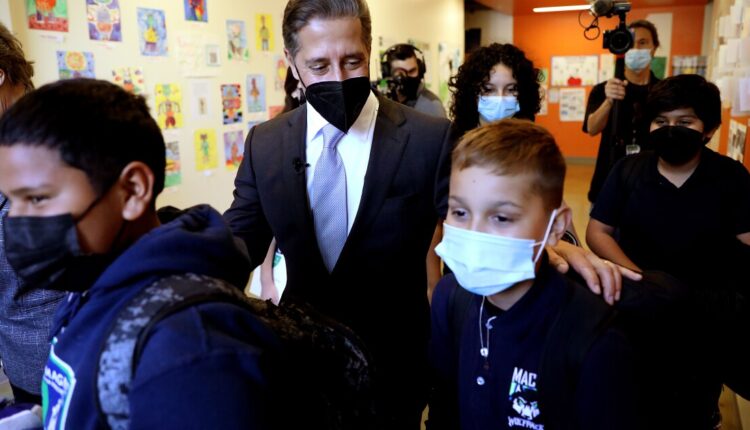 Los Angeles County’s indoor mask mandate will likely be lifted by the end of next month, a top health official said this week, though that timetable could potentially be even shorter should the federal guidance on face coverings change.

LA County is one of just a handful of areas that have retained a local universal indoor mask order after California lifted its statewide mandate on Wednesday. Other places that have said they will keep their mask rules in place for now include Palm Springs and Santa Clara and Mendocino counties.

“It’s not possible for us to predict future transmission, but we do anticipate that if we have these continued steep declines in cases, which indicate lower transmission, we will be able to safely lift indoor masking mandates in mid-to-late March,” LA County Public Health Director Barbara Ferrer said.

To lift its indoor mask mandate, LA County must reach “moderate transmission,” as defined by the US Centers for Disease Control and Prevention. At that point, the agency says case rates are low enough that vaccinated people don’t need to mask up in indoor public settings.

In LA County, reaching that threshold means recording fewer than 730 new coronavirus cases a day over a weekly period — a level last achieved between mid-March and mid-July last year.

The county is now averaging about 4,000 cases a day over the last week, dramatically down from the early January peak of more than 40,000.

“There is still work to be done to reduce transmission to a level where there’s less risk,” Ferrer said. “Despite the recent declines, transmission in LA County still remains high. And that can lead to continued disruptions associated with staffing shortages, reduced economic security and, tragically, higher morbidity and mortality for those who are most vulnerable.”

At the current rate of decline, Ferrer expects the case rate will reach the county’s goal by mid-March — though she noted that estimate is subject to change depending on how things are progressing.

Since the county’s guidance is aligned with the CDC, any changes at the federal level could trickle down locally. dr Rochelle Walensky, the CDC’s director, said this week that “we are looking at all of our guidance based not only on where we are right now in the pandemic, but also on the tools we now have at our disposal.”

“We want to give people a break from things like mask wearing when these metrics are better, and then have the ability to reach for them again should things get worse,” she said during a briefing.

The timing of a potential update is unclear, but, Ferrer said, “we’ll be carefully reviewing their new recommendations, when released, to assess whether we also need to recalibrate.”

Ferrer’s mask timeline projection came the same week that LA County marked its 30,000th COVID-19 death, a sum greater than the entire population of cities such as Maywood, San Fernando or South Pasadena.

“We have not lost this many people to a single disease over such a short time span in recent history,” she said.

“Our hope, she added, “is that as we enter this post-surge period, we can continue to take care of each other and minimize the loss of life that has devastated so many families.”

In mid-December, LA County was averaging about 15 reported deaths a day.

Daily coronavirus case rates and hospitalizations have fallen far more rapidly, as deaths are a lagging indicator of pandemic trends.

As of Wednesday, there were 1,713 coronavirus-positive patients hospitalized in LA County, roughly a third of this winter’s peak of 4,814, set on Jan. 19.

Hospitalizations have fallen to such a level that county officials this week relaxed their outdoor masking rules to let people go without face coverings outdoors at K-12 schools and childcare facilities, as well as in exterior areas of outdoor “mega events,” such as those at the Hollywood Bowl, Dodger Stadium, SoFi Stadium and Los Angeles Memorial Coliseum.

“We’re reaching the end of our devastating winter surge,” Ferrer said. “This means that we’ve successfully reduced the spread of COVID-19 in LA County to a level where our healthcare system is able to return to customary services.”

Ferrer acknowledged that mask mandates are unpopular with some, but pointed out that other public health measures that were once widely criticized are now accepted as necessary — such as seatbelt laws and no-smoking rules. She added her office has heard from many people who would rather keep masks in place.

“They’re worried because they’re essential workers … and they feel like there’s just going to be too many exposures,” Ferrer said. A sensitive path forward, she said, “puts front and center protecting those who are vulnerable during a pandemic — and that’s, for us, essential workers, and people who have vulnerabilities because of their conditions, and in many cases, where they’re living and working.”

That being said, it’s also important to allow people to take off their masks when conditions allow.

“We need to enjoy those times when transmission is low, and really, again, be able to take our masks off when there’s not a lot of transmission,” Ferrer said.

Ferrer’s decision not to immediately align with the state’s recently relaxed indoor masking rules has sparked opposition from two members of the five-person county Board of Supervisors.

“I want to follow the state’s lead and lift the mask mandates,” tweeted Supervisor Janice Hahn, who represents the Palos Verdes Peninsula, Long Beach and southeast LA County. “I believe we are beginning to lose the trust of the people.”

“COVID-19 transmissions, quite frankly, disproportionately impact the everyday workers who make up the backbone of this very local economy,” Mitchell, who also serves as the board’s chair, said during a press briefing earlier this month. “They are disproportionately brown and Black workers who must go to their jobs every day and interact with people every day.”

Two supporters of the county’s masking approach, Mitchell and Supervisor Hilda Solis, represent areas with many Black and Latino residents who have been hit disproportionately hard by the pandemic. Some of the areas in LA County with the highest cumulative COVID-19 death rates are in South LA and on the Eastside.

Factors that lead to being particularly vulnerable to COVID-19 include areas that are densely populated, have many crowded households, lower vaccination rates, reduced access to coronavirus testing and medical care, a higher prevalence of underlying medical conditions, and racial and ethnic disparities in resources needed to improve public health, according to Ferrer.

Health experts have observed before that LA County is particularly vulnerable in a pandemic, given its high rates of poverty and homelessness, huge numbers of essential workers and some of the densest neighborhoods in the nation.

However, the masking debate is not limited to LA County.

“I think we have vulnerable populations that are still out there, including people who are not eligible to be vaccinated,” Carson, who represents Berkeley and part of Oakland, said at a board meeting this week. “It’s important to really keep our mask mandates in place … until we have a much better sense of where things are going. We’re still not there yet.”

dr Noha Aboelata, chief executive of Roots Community Health Center in Oakland, criticized the lifting of mask mandates at this moment, when case rates in Alameda County were still high compared to prior pandemic waves and children under age 5 are still not eligible to be vaccinated.

“This is not progress,” Aboelata tweeted. “Removing mask mandates now, besides exacerbating the problem, is sending a message that no one actually cares.”

dr Nicholas Moss, the Alameda County health officer, said at the board meeting this week that lifting the local mask order is not only tied to the significant drop in case rates since the Omicron peak, but a recognition that “we need to relax our most restrictive and our broadest restrictions at times when the risk is lower, so that we can get the best possible buy-in for those policies when we need them again. And we may very well need masks again for a future surge causing severe disease.”

In Santa Clara County, the home of Silicon Valley, Supervisor Cindy Chavez said she would have preferred her public health department to be as permissive as the state allows. Not aligning with the state results in a “level of confusion, consternation and stress,” she said during a board meeting earlier this month.

“We cannot lift the indoor mask requirement with community transmission as high as it is right now,” Cody said, adding that she expects case rates to drop to a low-enough level to lift the local mask order in March.

“Some counties — obviously LA’s one of them — may take a little bit more time [to lift indoor mask orders]but I’m confident they’ll get there, very, very shortly,” he said.

Another question that looms is the timing of when the state may revise the indoor mask requirement for K-12 schoolchildren. Newsom said plans are in place to announce by Feb. 28 a specific date to ease that order.

As is the case now, however, county-level public health officials will have to decide whether to be as lenient as the state allows.

“In general, we try to align as much as possible with the state,” Ferrer said last week, but “sometimes the state is moving in the direction that doesn’t really make sense for our county.”

On Thursday, Ferrer said the state’s universal indoor masking requirement in K-12 schools has been an important part of keeping classrooms open for in-person instruction.

“Masking requirements in schools have been associated with lower risk of outbreaks,” she said. “The decision to mask in schools, combined with the other mitigation approaches, likely helped successfully limit the number of school disruptions in California during the Omicron surge.”

Ferrer cited data showing that California has experienced a relatively low number of school disruptions between Jan. 1 to Feb. 15, even though it has the largest school-aged population in the country. By contrast, Texas, which has the second-largest school-aged population in the nation, but bans school mask requirements, “had almost five times more school disruptions during the same period,” Ferrer said.

The number of school disruptions in California, where an indoor mask policy is required for K-12 schools, between Jan. 1 and Feb. 15 was much lower than in Texas, which bans mask requirements in schools, said LA County Public Health Director Barbara Ferrer.

Health and elected officials have expressed some concerns about relatively low vaccination rates among children age 5 to 11. While 84% of LA County residents age 12 to 17 have received at least one dose of COVID-19 vaccine, only 34% of children age 5 to 11 have done so. 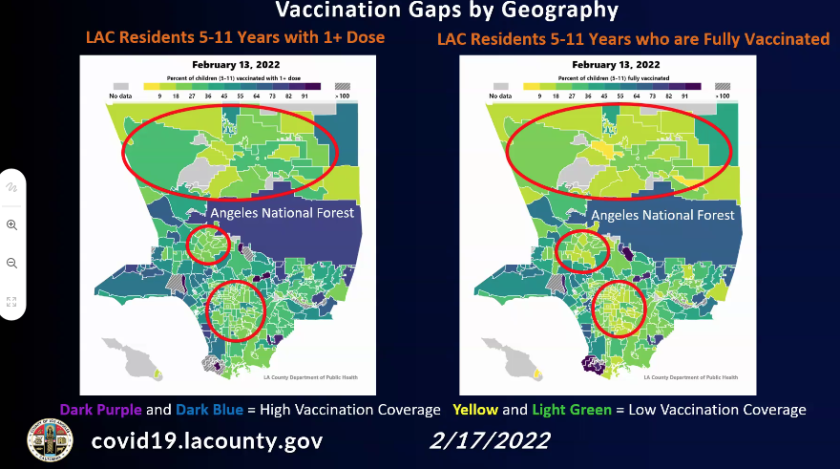 Places where vaccination rates among children ages 5 to 11 are particularly low in LA County are South LA, southeast LA County, the San Fernando Valley and the Antelope Valley.

Children in certain parts of the county are also less likely to have been vaccinated against COVID-19. Areas where vaccination rates are particularly low for children ages 5 to 11, Ferrer said, include parts of South LA, southeast LA County, the San Fernando Valley and the Antelope Valley.