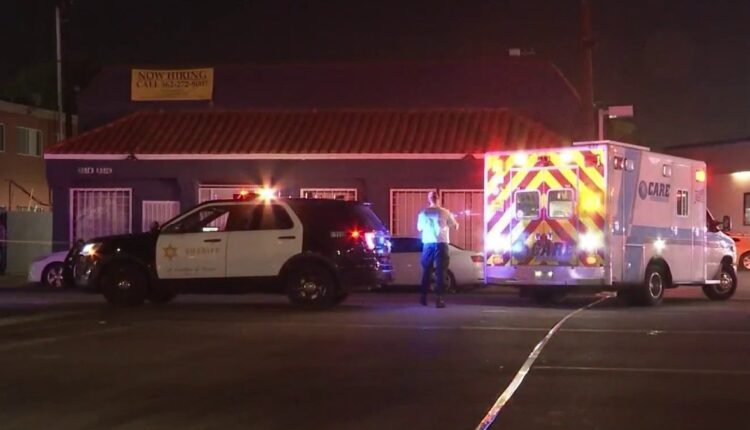 A man armed with a garden claw was shot and killed early Thursday by Los Angeles County Sheriff’s deputies who were responding to a report of a stabbing.

Deputies were at the intersection of Artesia Boulevard and Downey Avenue for an earlier report of a street race. While there, deputies were approached by a man who said someone tried to stab him with a garden claw, a multi-use tool for cultivating and weeding soil.

The man pointed out the attacker to deputies.

“Deputies attempted to detain the suspect, but he fled the scene southbound Downey Avenue on foot,” the sheriff’s department said in a statement. “When deputies caught up to the suspect, he turned around and advanced on them while swinging the approximately 3-foot long garden claw with spikes on the end at them, and a deputy-involved shooting occurred.”

The man was shot in the upper body. He died at a hospital.

Details about his identity were not immediately available.

A woman who identified herself as the mother of the man who was shot said he is 32 years old, a father of six children. She said she went outside after hearing a crash during the street takeover and saw her son running down an apartment walkway with the garden tool in his hand. He was followed by deputies, she said.

No deputies were injured.

Deputies said the reported stabbing does not appear related to the street race and takeover.

Anyone with information about this shooting is asked to call the Sheriff’s Homicide Bureau at 323-890-5500 or Crime Stoppers at 800-222-TIPS.

Things to do in the San Fernando Valley, LA area, March 3-10 – Daily News