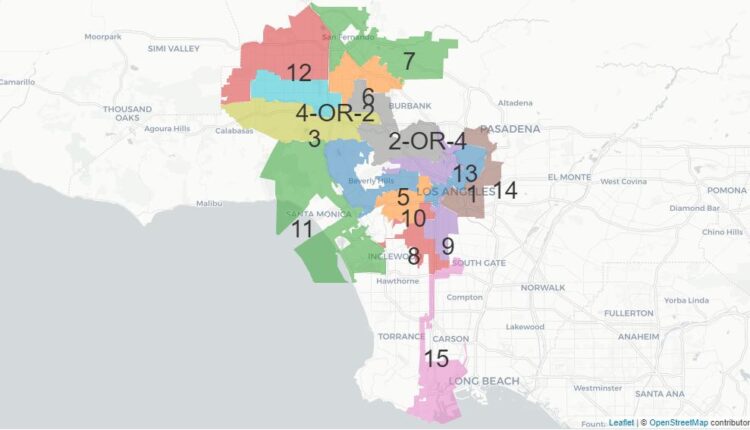 In its latest meeting last night, just three days ahead of its deadline to vote on a final draft map to forward to the LA City Council, the Los Angeles City Council Redistricting Commission made significant progress working through its list of community-suggest potential border adjustments – both major and minor – for its selected Draft Plan K 2.5.

Changes in this round, including many that have received significant public input during the redistricting process so far, included:

These are mostly significant changes, and taken together they go a long way toward satisfying voluminous public requests related to the current draft map, likely making it much more acceptable to large swaths of residents across the city.

Also, working through these significant issues allows the commission to move forward to other areas of concern, teeing up a new round of adjustments for tonight’s meeting.  These will likely include:

So here’s a closer look at what happened last night and what’s coming up tonight.

Before the map adjustments began last night, and as been the case at each of the last four public input meetings, this session opened with a presentation from a community organization representing a specific “community of interest.” This meeting featured the Southern Christian Leadership Conference of Southern California, addressing issues affecting the Black community in City Council Districts 8 , 9, and 10.

Speaking for the SCLC, Pastor William D. Smart, Jr. presented proposed maps for each of the three districts in question, drawn in cooperation with 10 other south LA community organizations, which he said are very similar to the districts as currently drawn in the Redistricting Commission’s current Draft Plan K 2.5.  The big issue facing these districts throughout the current redistricting process is whether or not several major economic assets, most notably USC and Exposition Park (with its museums and adjacent sports stadiums) should remain in CD 9, where they were moved in the last redistricting cycle in 2012… or returned to CD 8, from which they were taken in that last round of redistricting.  It’s a tug of war that has played out at almost every redistricting meeting so far, with numerous and roughly equal numbers of public comments on each side of the issue.

The SCLC’s recommendation, however, was to leave the assets in CD 9, which Smart said would be the best way to maintain continuity of a very active planning and development process in the area over the last 10 years (including development of the new Lucas Museum and soccer stadium, among other projects).

Maps of CDs 8, 9, and 10 recommended by the Southern Christian Leadership Conference. The maps are very similar to those in the current Draft Plan K 2.5, and would leave several key economic assets – USC and Exposition Park – in CD 9, where they were moved in the 2012 redistricting process.

Because the commission had so much actual mapping work to do at last night’s session, the public comment period before the mapping session was limited to just 45 minutes, instead of the 90 minutes that has been more usual in the last few meetings.  During this time, two Neighborhood Councils and 38 individuals provided input on their areas of concern…including seven people from the Greater Wilshire Neighborhood Council area who thanked the Commission for keeping this area united in CD 5 in the current draft plan, and two from the Mid City West Neighborhood Council area who vehemently opposed the commission’s recent splitting off of the Melrose neighborhood from the rest of the MCWNC’s longtime home in CD 5 and moving it to CD 13.

In addition to these comments, there were thanks for other recent adjustments including:

And then there were pleas for other adjustments not yet made, many of which have been much requested previously, and were finally tackled later in the meeting.  These included:

At least half of the issues raised during public comments last night – all of which have been spotlighted in public comments throughout the long redistricting process – were finally addressed in last night’s mapping session.

The first of these was the division of  “economic engines” between Council Districts 8 and 9 – particularly the USC campus, the Exposition Park museums, and the adjacent sports stadiums.  These assets were moved from CD 8 to CD 9 in the last round of redistricting, in 2012, and CD 8 residents have been fighting hard for their return this time around.  The two districts are among the poorest in the city, and CD 8 is currently the only remaining Black majority district in the city.

Opening the commission’s debate on this topic last night, Commissioner Charisse Bremond, appointed by the Mayor’s office, acknowledged the positive development in the area under CD 9’s management (including the new Lucas Museum and the new soccer stadium), and suggested a rather Solomonic solution to the ongoing battle between the two districts:  keep USC and the stadiums in CD 9, and move the Exposition Park museums into CD 8.

This suggestion was not made as a formal motion, however, and Commissioner Valerie Shaw, appointed by CD 8, quickly headed off Bremond’s suggestion by making a motion to move USC and Exposition Park to CD 8.

The motion was followed by considerable debate in which many commissioners expressed support for the goals of both districts…a balance that played out in the eventual vote, during which so many commissioners abstained the first time around that – according to commission rules in such situations – the abstaining voters had to be re-polled and forced to vote yes or no on the question.  In the end, after the re-vote, the motion just barely passed by a vote of 11 in favor and 9 opposed.

New version of CDs 8 (red) and 9 (purple) in Draft Plan K 2.5 Amendment 3, after last night’s adjustments. USC and Exposition Park have been moved to CD 8, while the University Park neighborhood north of the USC campus remains in CD 9.

Next, even though the Commissioners spent most of their previous meeting on Saturday making adjustments to the proposed districts in the San Fernando Valley, they went back to the Valley last night to tackle the issue of the Sepulveda Basin recreation area.  At the request of homeowner groups in Encino, the Basin area had been moved from the proposed CD 4-or-2 to CD 3 at another recent meeting.  But after that move, residents of the much less affluent CD 4-or-2, along with several of the commissioners themselves, protested  the transfer of this prime “asset” from a less to more affluent area, and asked for a reconsideration.  The population of the affected area isn’t large enough to adversely affect either district, no matter where it’s placed, and after a brief discussion, the Commissioners reached a consensus on moving the Basin back to District 4-or-2.

Detail of Draft Plan K 2.5 Amendment 3, showing the Sepulveda Basin recreation area (the bulbous tail of the blue area) moved back into Valley District 4-or-2.

Continuing their look at equity issues in the various Valley districts, several commissioners expressed strong interest in revisiting the structure of both the proposed District 3, running along the southern edge of the Valley (which could wind up being as much as 74% white  as currently drawn), and the way districts have been drawn across the western edge of the Valley as well, with a more careful eye to ethnic and economic balance.  This effort, which requires a close look at many different factors the commission is tasked with balancing, could require some intricate maneuvers, however, so rather than taking the time to devise solutions at this meeting, Commission Chair Fred Ali requested that Executive Director Frank Cardenas and mapping consultant Paul Mitchell return to the next meeting with some proposed alternatives for these areas, which they agreed to do.

Next, Ali moved the discussion to east LA, where it turned out several requests – to reunite more of Chinatown in District 1, and including more of Highland Park, including the York Blvd. commercial district, the Highland Park Senior Center, and Tiny Homes Project, in CD 14 – were not only possible but had the added benefit of unifying more of the Herman and Cypress Park Neighborhood Council areas as well.  These changes, too, were approved by consensus of the commission.

East LA detail of Draft Plan K 2.5 Amendment 3, adding more of Highland Park, including both sides of the York Blvd. to CD 14, reuniting more of Chinatown in CD 1, and reducing splits in the Herman and Cypress Park Neighborhood Council areas.

The final big issue tackled last night was moving Los Feliz, Griffith Park, and hillside neighborhoods in the Hollywood United Neighborhood Council area, out of CD 13 and into CD 2-or-4.  These changes turned out to counterbalance other population movements in the adjustments above, and were also easily agreed to by commission consensus.

Detail of Districts 2-or-4 and 13 in Draft Plan K 2.5 Amendment 3, showing Los Feliz united with Griffith Park, Whitley Heights and other hillside communities in CD 2-or-4.

The commission will pick up its drive to address as many remaining mapping issues as it can this week at its next meeting tonight – Tuesday, October 16, at 6 p.m.

There are several issues likely to be in the spotlight:

Another rather major issue that may get another look tonight is the recent splitting off of the Melrose neighborhood from the rest of the Mid City West Neighborhood Council area in CD 5, and moving it to CD 13, which has drawn strong protests from the MCWNC.  Commissioners discussed it very briefly last night, but a quick look at the maps didn’t reveal any easy solutions.  The problem is that the area in question is quite populous (more than 7,000 people), and CD 5 is already over its population limits.  So adding Melrose back to CD 5 would require population to be trimmed elsewhere in the district, and most of the districts surrounding CD 5 (such as CD 10) are also at their population limits, so couldn’t absorb any incoming population cut from CD 5.   The change was too complicated, and came too late in the meeting, to be discussed further last night.

Finally, but definitely not least for tonight, Commission Chair Ali also promised to more formally name the currently proposed Districts “4-or-2” and “2-or-4.”

The remaining meetings are:

All meetings will begin at 6 p.m, and are available at the same Zoom link.

Finally, for anyone wanting to do a really deep dive into the public comments the commission has received on Draft Plan K 2.5 and its various amendments, outside the public comment sessions at the Zoom meetings, you can find all the e-mails and online form submissions collected here.