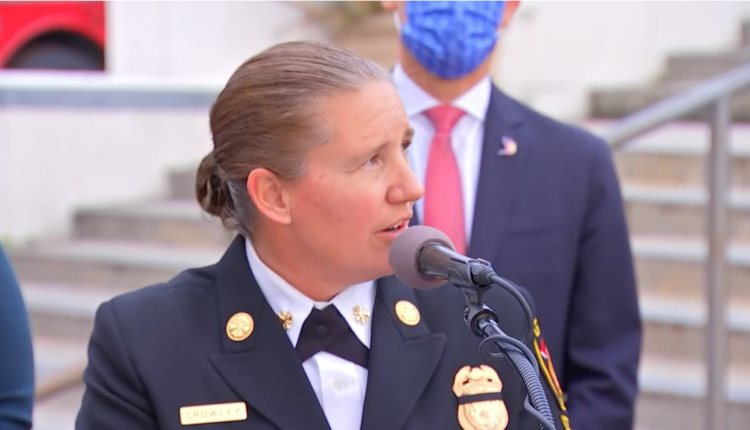 The Los Angeles City Council voted Tuesday to confirm the appointment of Deputy Chief Kristin Crowley who will become the first woman to lead the Los Angeles Fire Department.

The appointment would be effective March 26, when Chief Ralph Terrazas is scheduled to retire.

“I think it’s so fitting for this nomination to come to council today, on the first day of Women’s History Month,” Council President Nury Martinez said. “Our city’s fire department has gone 136 years without a woman in its highest office and today we’re going to finally be able to turn the page.”

“I’m truly honored to be considered the nominee for the next fire chief of the Los Angeles city fire department and I am humbled and proud to have earned the opportunity to represent each and every one of our 3,779-strong civilian and sworn personnel of our department,” Crowley told council members.

Crowley already made history within the LAFD when she became the city’s first female fire marshal in 2016.

“As the fire chief, if confirmed, I vow to take a strategic and balanced approach to ensure we meet the needs of the community we serve,” Crowley said. “We will focus our efforts on increasing our operational effectiveness, enhancing firefighter safety and well-being, and fully commit to fostering a diverse, equitable and inclusive culture within the LAFD.”

Crowley took the firefighters’ exam in 1998 and placed among the top 50 scores out of 16,000 applicants, according to the department. During her 22 years at the department, she rose through the ranks as firefighter, firefighter paramedic, engineer, fire inspector, captain I, captain II, battalion chief, assistant chief, fire marshal and deputy chief.

“Throughout her distinguished career, Kristin Crowley has proven her brilliance, determination and bravery on the job again and again. She’s also shown this city her heart, with her tireless commitment to helping students access life-changing educational opportunities. There is no one better equipped to lead the LAFD at this moment when Kristin. She’s ready to make history, and I’m proud to nominate her as the department’s next chief,” Garcetti said in his announcement about the nomination.

As deputy chief, Crowley helped develop a five-year strategic plan aimed at fostering a culture within the department that is more open to change, according to the mayor’s office. She said she will build on that effort, if confirmed as chief, to deepen existing efforts and create new ways to foster equity and inclusion within the department, the mayor’s office added.

“If confirmed as your new fire chief, I will be fully committed to leading and inspiring our tremendous department into an exciting future that is filled with new opportunities to grow, to innovate and to empower,” Crowley said.

Terrazas, who became the department’s first Latino chief when appointed in 2014, previously announced his intention to retire this year.

“It was a privilege to serve as the fire chief of this world-class department,” he said on Jan. 18. “For nearly eight years, we made considerable strides in technology, implemented innovative ways to respond to emergencies, and became a model for other agencies.”

Terrazas added that Crowley “is an exemplary leader and has a broad base of experience that will serve the department well. Chief Crowley has been successful at every position and I expect her success to continue as the next fire chief.”

Crowley would lead an agency that has recently come under fire for allegations of a culture of racism, sexism, retaliation and abuse endured by women at the department. On Oct. 19, Fire Commissioner Rebecca Ninburg called on the mayor to remove Terrazas as chief, saying, “culture starts at the top and leaders set the tone.”

The day before Ninburg sent the letter to Garcetti, the Los Angeles Women in the Fire Service, to an association of female firefighters, had a news conference to call for the chief’s removal. The association’s president, Kris Larson, said Terrazas had brushed off the incidents as “one-offs or pockets.”

Garcetti issued a statement to City News Service after that news conference saying he had “full confidence” in Terrazas and that he “has done an excellent job of leading and rebuilding our fire department during some of our toughest days ever.”

Terrazas said in a statement to City News Service in October that he met with the Los Angeles Women in the Fire Service and discussed collaborative initiatives to improve the work environment.