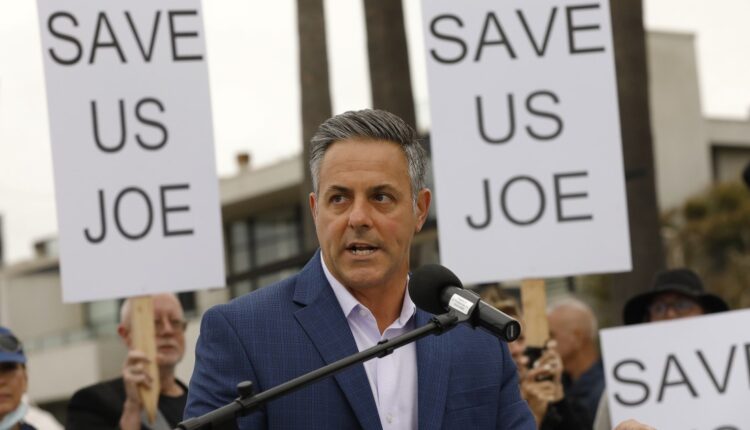 Los Angeles City Councilor Joe Buscaino stepped up the stake in the debate on where and how to restrict homeless camps and urged his colleagues to ban the pitching of tents within 150 feet of any public school in the city.

Buscaino, who is running for mayor, said he wanted the council to use its new anti-camping ordinance to make “no camping zones” sidewalks around more than 1,000 campuses.

The city council announced its proposal on Monday before Larchmont Charter School in Hollywood, the first day of school for hundreds of thousands of children in the Unified School District of Los Angeles. But his event was quickly cut short when one of his aides got into a brief scuffle with a group of protesters who had surrounded Buscaino, screaming and waving signs as the city council tried to make his remarks.

Protesters sing and a brief scuffle breaks out during a Monday press conference of LA City Council and Mayoral candidate Joe Buscaino.

The incident began when Buscaino spokesman Branimir Kvartuc grabbed one of the protester’s signs that had come close to the city council. The protester, posing as Stevie, tried to stop him and yelled at him to keep his hands off her.

Theo Henderson, host and creator of the “We the Unhoused” podcast, stepped in and pushed Kvartuc away from the protester and pushed him into the lectern.

The crowd poured into the street as protesters yelled at Kvartuc and demanded that police arrest him. Stevie, who showed up as part of the Services Not Sweeps Coalition, told officials not to protect Kvartuc.

“This man grabbed my shield and then kicked me with his elbow,” she told the Times. “It’s all on video. And then the whole crew came because we won’t let men attack women, either in front of or in front of the camera. “

In a phone call, Kvartuc denied bothering anyone with his elbow. “I grabbed the stick to move it away [Buscaino’s] Face, ”he said. “That’s all I’ve done.”

Buscaino spoke on Monday near a section of Selma Avenue lined on either side with tents, bicycle parts and other belongings. Protesters said they gathered behind Buscaino to make sure he did not provide television cameras to the camp as a backdrop.

Amy Held, executive director of the Larchmont Charter School, said she viewed the situation on the streets of LA as a humanitarian crisis. But she said she was also responsible for ensuring that her children get to school safely.

“I just want to make sure the streets and sidewalks around our campus are clear so our kids can get to and from school,” she said.

“What it ignores is that there are uninhabited families who go to these schools, families who love their children as much as they love the shared apartment,” he said.

“Permanent residence is the solution to homelessness and this action does not bring us any closer to solving the current humanitarian crisis,” she wrote on Twitter.

Buscaino has scheduled his press conference in a part of Hollywood represented by Councilor Mitch O’Farrell. Dan Halden, an O’Farrell spokesman, said his boss would not attend the Buscaino press conference and was unaware of it until Buscaino issued his advice.

“Our team’s focus, both in this area of ​​Hollywood and throughout the 13th Ward, will continue to be on reaching people affected by homelessness and effectively connecting them to housing and resources,” he said.

Buscaino’s proposal is part of a lengthy tug-of-war in town hall over how far and how quickly the city’s anti-camping law should be enforced.

Homeless lawyers have accused city leaders of criminalizing poverty by setting up a new process that could result in people living on the streets being accused of camping in certain locations. But business groups and some neighborhood organizations have advocated new restrictions, saying the city must restore access to its public spaces.

The ordinance, which received a final vote last month, prohibits people from sitting, sleeping, lying down or storing items on sidewalks that are within 150 meters of “sensitive uses” such as parks, libraries, schools and daycare centers condition. But it also limits the city’s ability to enforce these restrictions.

Tents and other belongings line both sides of Selma Avenue near the Larchmont Charter School.

According to the regulation, enforcement cannot take place near schools and other public facilities unless the council has given the go-ahead. Signs would need to be posted in a specific location and remain active for 14 days before enforcement could begin.

Enforcement would also be accompanied by the arrival of “street engagement” teams, who would spend up to four months providing shelter and other services to residents of a target area outside, according to a city report released last month.

Buscaino has already proposed using the ordinance to ban camps around homeless shelters in his district, which stretches from Watts to San Pedro. However, other councilors have taken steps to further restrict enforcement.

The council’s homeless committee voted 3-1 on Thursday to recommend that public relations and enforcement in parks, schools and other sensitive areas be limited to 15 locations between September and February. Such a strategy would effectively allow each of the 15 members of the council to target one location during this period.

Council members Mark Ridley-Thomas, Nithya Raman and Kevin de León voted for this strategy, which has yet to be approved by the full council.

Ridley-Thomas, weighing his own candidacy for mayor, advocated the more limited approach, saying the city should start with a pilot program and then assess over the next year whether its street engagement teams are working effectively to get people into the house bring to.

“The goal is to get this right and then to be able to build on our successes,” he said in a statement. “A pilot phase would ensure that operations and resources are used effectively, with the aim of getting the best results for both inhabited and unoccupied people.”

Buscaino was the only one against, arguing that the process was too slow and too bureaucratic. The proposal for more limited enforcement goes next to the Council’s Energy and Environment Committee, chaired by O’Farrell.