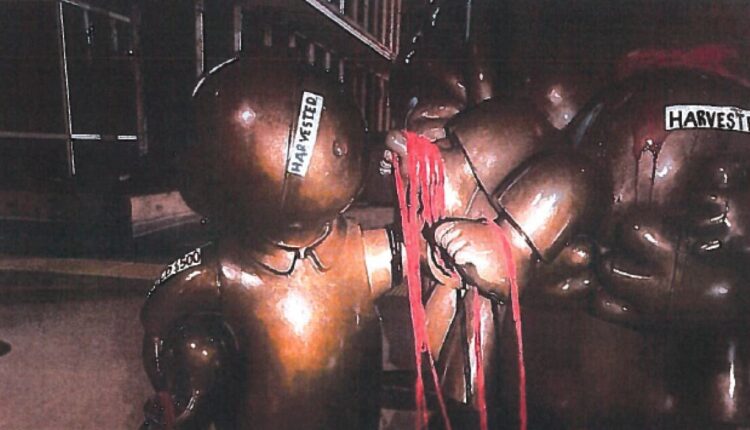 An antiabortion activist from Los Angeles was charged with stalking and harassing a San Francisco doctor and defacing a statue, authorities said Thursday.

Aaron Jonathan Hurley was arraigned, pleaded not guilty and released on his own recognition, said Rachel Marshall, a spokesperson for the San Francisco district attorney’s office.

A prosecutor’s request for electronic monitoring was denied, but the judge ordered Hurley’s attorney to notify the district attorney’s office if he returned to San Francisco, Marshall said. Hurley was also ordered to stay away from the areas where the incidents occurred.

Hurley was charged with one felony count of stalking and multiple misdemeanors, including two counts of vandalism and one count each of obstructing freedom of access to a clinic, trespassing with intent to interfere and interfering with a business.

He was part of a group that “invaded” a healthcare clinic and stalked a doctor who provides abortions, among other health services, to women, according to the district attorney’s office.

Prosecutors named two other suspects Thursday: Kristen Turner, who was cited and released, and Lauren Brice Handy, whose arrest warrant is pending.

Allison Aranda, Hurley’s attorney, could not immediately be reached for comment.

According to prosecutors, Hurley is a member of Progressive Anti-Abortion Uprising, “an anti-choice group that targeted an abortion and health care provider” at Zuckerberg San Francisco General Hospital and Trauma Center.

On March 13, he and others defaced and damaged a bronze statue of the Madonna and Child at the hospital by covering it with fake blood and with stickers that bore the doctor’s name, prosecutors said.

Handwritten notes that said “harvested” and “sold $500″ were also put on the statue, prosecutors said. The incident was captured by surveillance cameras.

The following day, four people “invaded” the hospital’s Women’s Options Center using a woman who claimed she was in need of counseling, prosecutors said.

“When a nurse went to speak to her at the door, Mr. Hurley and other trespassers came out from hiding and ran through the door,” prosecutors said. “They barged into the clinic and began filming patients and staff. Staff reported that these protesters were attempting to barge into operating rooms.”

Hurley and others entered the clinic where the doctor works and chanted the doctor’s name along with “We know who you are, we know what you do,” prosecutors said.

The doctor and center staff feared for their safety and for the safety of their patients, prosecutors said.

“That night, Mr Hurley and the others went to the targeted doctor’s home address, an address that the doctor had worked to keep private, and placed permanent stickers that said ‘a killer lives in your neighborhood’ at neighbors’ houses and on the doctor’s front door,” prosecutors said.

These posters were left March 14 at the targeted doctor’s home and around the neighborhood, prosecutors said.

The fliers had a QR code that led to a website that “specifically named the doctor, provided false, inflammatory claims about abortion procedures, and attacked the doctor for providing abortion services,” prosecutors said. They were also distributed around the doctor’s neighborhood.

According to the district attorney’s office, the doctor was frightened for their safety, the safety of their family and was forced to change their entire routine and route to work.

A warrant for Hurley’s arrest was issued, and he turned himself in before Thursday’s arrangement, Marshall said.

“Reproductive rights are under attack across the country — and here in San Francisco,” said Dist. atty Chesa Boudin. “Right here in our city, doctors who provide critical healthcare along with vulnerable patients are being stalked at their homes and places of work.”

Boudin said his office would “unconditionally protect all medical providers and women” who seek abortions or other reproductive healthcare.

The charges come as tensions flare ahead of the US Supreme Court’s expected overturning of Roe vs. Wade, which legalized abortion nationwide in 1973.

Should the decision be overturned, many California lawmakers and Gov. Gavin Newsom have pledged to protect access to the procedure.

Newsom has unveiled a plan for California to set aside $40 million for abortion service providers to help cover uninsured residents and an expected influx of women from other states seeking care if Roe vs. Wade is overturned.

California legislators have also said they will ask voters in November to place permanent protections for the procedure in the state Constitution.

The demonstrations come after Politico reported May 2 that a draft opinion written by Justice Samuel A. Alito Jr. indicated a majority of the court would vote to overturn Roe vs. Wade, reversing its recognition of women’s constitutional right to access safe and legal abortions.

The Supreme Court has confirmed the authenticity of the draft but said that the decision is not yet final. At least 26 states are expected to ban abortion if the precedent falls.

The court, which has a 6-3 conservative majority, could issue a final opinion in late June or early July.