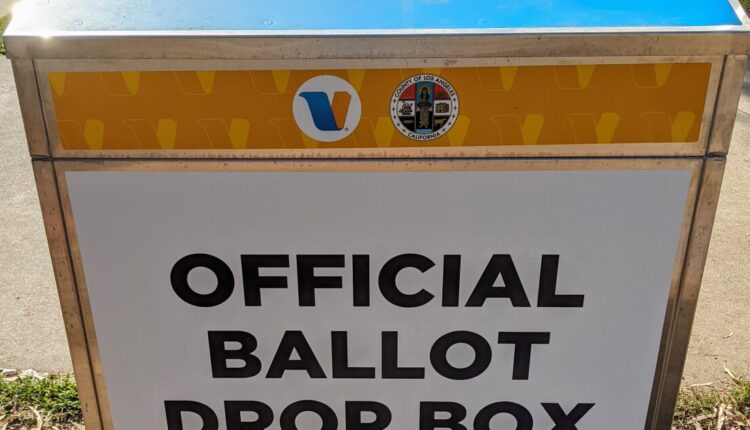 Good morning, and welcome to L.A. on the Record — our new local elections newsletter. It’s Julia Wick and Benjamin Oreskes running the show this week with an assist from David Zahniser and Dakota Smith.

Get the lowdown on L.A. politics

In this pivotal election year, we’ll break down the ballot and tell you why it matters in our L.A. on the Record newsletter.

Nothing is simple in campaign season, but especially not basic biographical information.

With the list of candidates who will appear on the June ballot in Los Angeles now solidified, one more element remains (slightly) in play: the ballot designations, or words next to a candidate’s name that describe their profession, vocation or occupation.

These pithy descriptions are the last words a voter reads before casting their ballot and have the power to potentially sway someone who doesn’t know much else about a down-ballot race. As such, they can also be subject to intense scrutiny.

In the city attorney’s race, candidate Richard Kim’s campaign challenged competitor Marina Torres’ designation as a “Federal Corruption Prosecutor,” arguing that the title is misleading based on the cases she actually prosecuted as an assistant U.S. attorney.

“Most of her cases involved drug traffickers. There is no evidence that her principal work activity … in 2021 was to prosecute ‘corrupt’ conduct,” Kim campaign consultant John Schwada said by email, characterizing Torres’ choice of ballot designation as a “publicity stunt.”

Michael Trujillo, a consultant for the Torres campaign, said the March 2022 arrest of a former Transportation Security Administration officer charged with smuggling narcotics through L.A. International Airport is an example of Torres’ anti-corruption work, and called it “one of Ms. Torres’ most significant matters” prior to leaving the Department of Justice.

Challenging ballot designations has become something of a sport in California politics — squabbles over the occasionally picayune rules return each cycle like the swallows to Capistrano.

Ahead of the June 7 primary, questions also have been raised about the designations of two school board candidates and four City Council candidates, according to the city clerk’s office. (The city clerk reviewed each of the challenges and did not end up changing any ballot designations. At this point, any candidate who still wants the wording changed will have to take legal action, city officials said.)

“This happens every cycle,” said Trujillo, a veteran political consultant who works with four of the other candidates whose designations have been challenged, along with Torres. “And it’s always losing, flailing campaigns that make these challenges.”

No court hearings are currently scheduled on the ballot designation challenges, according to the city clerk’s office, making it unlikely that we will see any changes mandated before the county’s March 31 ballot printing deadline.

But because these descriptions are central to candidates’ public personas, let’s take a quick look at some of the challenges raised this cycle.

Nick Melvoin, an L.A. school board member running for reelection, identified himself as an “Educator/School Boardmember” in his filing paperwork, essentially the same designation used by fellow incumbent Kelly Gonez.

A local activist took issue with Gonez’s and Melvoin’s use of “boardmember” as one word — a bit of brevity that allows them to also identify as educators while staying under the three-word limit.

The term “‘Boardmember’ has historically and consistently been considered one word for ballot designations in city and LAUSD elections,” according to city clerk’s spokesperson Josué Marcus.

(Geographical names like “City of Los Angeles” are also considered one word, as are hyphenated words, as long as they appear “in any generally available standard reference dictionary” published in the U.S. within the 10 calendar years immediately preceding the election, according to election rules.)

Other challenges, like the one targeting Torres, hinged on how candidates actually spend their days at work.

In Council District 9, Councilman Curren Price and challenger Adriana Cabrera (who did not qualify for the ballot) took issue with fellow candidate Dulce Vasquez’s designation as “Educator.”

In a letter to the city clerk, Price’s lawyers argued that Vasquez’s job as a strategic partnerships director at Arizona State University “focused on external relations, rather than education.”

Vasquez’s campaign manager, Danielle Guillen, responded by saying the title of educator “encompasses everyone it takes to provide a student with the knowledge and resources they need to thrive.”

“It is unfortunate that Councilmember Price is choosing to focus on this instead of addressing the very urgent needs of his constituents by helping solve our affordable housing crisis, homelessness, or creating good-paying jobs,” she said.

Price will also appear as an educator of sorts on the ballot. His designation reads “City Councilman/Professor,” though he last taught at Los Angeles Southwest College prior to joining the Legislature in 2006, according to Pulliam.

Candidates can refer only to current professions, vocations or occupations or those from the calendar year immediately preceding their filing, the ballot regulations say.

But Pulliam argued that Price’s “City Councilman/Professor” designation would qualify as current, because teaching is a lifelong profession/vocation and the councilman’s California Community Colleges teaching credential issued in 1988 remains valid.

— How left is left enough? Rep. Karen Bass is running for mayor as a progressive. But some L.A. leftists have publicly decried her more moderate stances on policing and homelessness.

— Rick Caruso made a (virtual) pilgrimage to Sherman Oaks to meet with one of the most powerful homeowners associations in the city.

During a very friendly 45-minute Zoom chat with the Sherman Oaks Homeowners Assn. on Wednesday, Caruso talked up his San Fernando Valley bona fides, continued his businessman pitch (“Everybody who’s running has never signed the front of a paycheck. They’ve only signed the back”) and pledged to protect low-density neighborhoods “1,000%.”

Caruso, a real estate developer with the wealth to self-finance his campaign, also pledged not to take any campaign money from developers, corporations or lobbyists.

— Independent expenditure o’clock: Caruso has already put millions of dollars toward television ads and is expected to vastly outspend his competitors in the Los Angeles mayor’s race. But supporters of Bass have launched an independent expenditure committee to help the longtime officeholder compete with Caruso’s wealth. The initial donation includes $125,000 each from Hollywood producer-director J.J. Abrams and his wife, Bad Robot Productions co-Chief Executive Katie McGrath, according to disclosure filings.

— Activists protest the clearing of a homeless encampment: Little Tokyo’s Toriumi Plaza has become the latest locale in Los Angeles where activists are angry about plans to clear a homeless encampment. De León has been helping coordinate the effort to fence off the plaza and move the residents into various forms of interim housing. Outreach workers had managed to get 103 people from the plaza into some kind of shelter, according to the councilman’s office, and by Friday no one was in the plaza.

— School board lineup: For more than a decade, L.A. school board races have been a battleground between backers of charter schools and the teachers union, with major funding poured into campaigns by each side. The Times’ Howard Blume reports that 10 candidates are vying for three seats in the June primary election.

Gonez and Melvoin — who won with the support of charter school advocates in 2017 — are competing for reelection against several challengers. And four hopefuls are fighting to replace Monica Garcia, who must step down because of term limits.

— We’ve reached the end of Wipeout Week, with the city clerk completing a list of 55 candidates who are running for city office on the June 7 ballot.

The Times did a roundup on the candidates in those 11 contests. And, as we expected, a number of would-be candidates failed to make the cut, falling short of the 500-voter-signatures threshold needed to appear on the ballot.

Those wipeouts had a big impact on some key races, turning them into two-person contests. On the Eastside, Councilman Gil Cedillo will face off against public policy advocate Eunisses Hernandez. In South Los Angeles, Price will go head-to-head with Vasquez, a college administrator.

In the northeast Valley, Councilwoman Monica Rodriguez will compete against community advocate Elisa Avalos. And in the southwest San Fernando Valley, Councilman Bob Blumenfield will face off against businessman Scott Silverstein.

Unless some compelling write-in candidates jump in, each of those races will be decided in the June 7 primary, with no November runoff necessary.

We could still see as many as seven other contests that continue on to November — mayor, city attorney, city controller and four council races, since they have a much larger number of contenders.

— L.A. County Dist. Atty. George Gascón, and the bid to recall him, have been an issue for months in the mayor’s race. But this week, the recall question also came up at a forum for candidates seeking to replace Councilman Mike Bonin, who represents part of L.A.’s Westside and was a recent recall target himself.

Five of the seven candidates who attended Monday’s Q&A said they supported the Gascón recall. Two others — civil rights attorney Erin Darling and former public works commissioner Greg Good — said they do not. Good called recalls inappropriate and “a waste of time.” Darling said they are “against democracy.”

Angelenos will have plenty of opportunity to learn more about the major mayoral candidates in the coming week, with several debates and candidate forums scheduled.

Caruso will appear in his first candidate debate Tuesday at USC, onstage alongside Bass, City Atty. Mike Feuer, Councilman Joe Buscaino, and De León. Co-sponsored by The Times, USC Dornsife Center for the Political Future and KTTV (Channel 11), Tuesday’s debate will be streamed at latimes.com and aired live on Channel 11 from 6 to 7:30 p.m.

On Monday, our own Ben Oreskes will moderate a debate about homelessness organized by Temple Beth Hillel in Valley Village along with nonprofit and faith leaders of the San Fernando Valley. Here’s how he’s thinking about the event:

“We’ve seen every candidate put out a plan to address homelessness and it’s included big promises on how they’d help people who are living on the streets. These forums are a chance to knock the candidates off their talking points and push them to go beyond rhetoric and think deeply about what is actually achievable in the face of the crisis playing out on the streets right now.

“To prepare, I’ve spoken with colleagues and my sources who are experts in a variety of facets of this crisis — including affordable housing financing, street services and mental health.

“I’ve tried to read and listen to everything these mayoral aspirants have said on homelessness and have been looking for areas where I’ve felt the candidates haven’t been explicit enough in their plans. One area I want to know more about: how the candidates plan to pay for the vast expansion of shelter and housing they’ve all been proposing.”

That’s it for this week! Send your questions, comments and gossip to [email protected] Did a friend forward you this email? Sign up here to get it in your inbox every Saturday morning.

The Next God of War Game Doesn’t Need Kratos