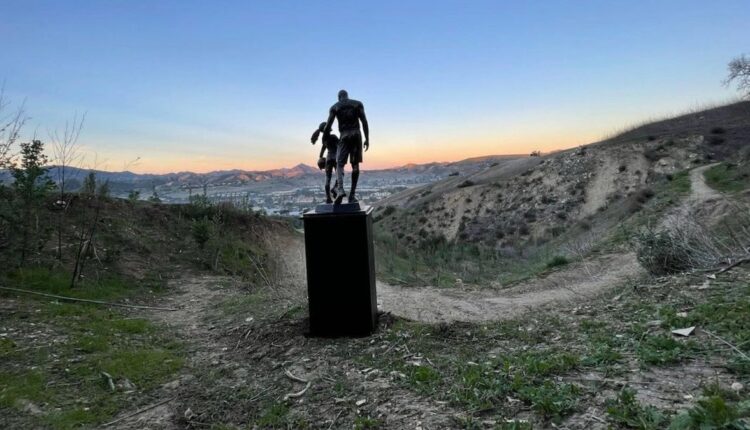 Exactly two years to the day after nine people, including Kobe and Gianna Bryant, died in a helicopter crash, a Los Angeles sculptor placed a statue of the basketball superstar and his daughter at the spot where they died.

West Hills artist Dan Medina said he brought the 160-pound bronze statue with him on a 4 a.m. hike to the crash site in the hills above Calabasas. Bryant and 13-year-old Gianna were among the nine dead when a helicopter crashed northwest of Los Angeles on the foggy morning of January 26, 2020.

The artwork shows the Lakers legend with his arm around his daughter as she holds a ball. Both wear basketball uniforms.

A sculpture of Kobe and Gianna Bryant is pictured January 26, 2022 at the scene of the helicopter crash that killed nine people.

Medina added the names of all nine victims of the helicopter crash at the base of the statue. They are Christina Mauser, who coached a girls’ team with Bryant; Sarah Chester and her daughter Payton, also a basketball player; John Altobelli, Orange Coast College baseball coach, wife Keri and daughter Alyssa, another team member; and the helicopter pilot Ara Zobayan,

It includes the words “Heroes come and go, but legends are forever.”

Since its placement at the crash site, fans have left pictures, flowers, and cards at its base.

The statue is a smaller version of a statue that Medina has in his studio. He plans to remove the statue by sundown, Medina told TMZ Sports.

The helicopter was flying the young basketball players and family members to a girls basketball tournament when it crashed into the hillside.

The group, who had bonded through the sport, were en route to the Mamba Sports Academy in Newbury Park. The Sikorsky S-76B departed Orange County’s John Wayne Airport just after 9 a.m., then made an about-turn in the Calabasas area, climbed, and then made a steep descent.