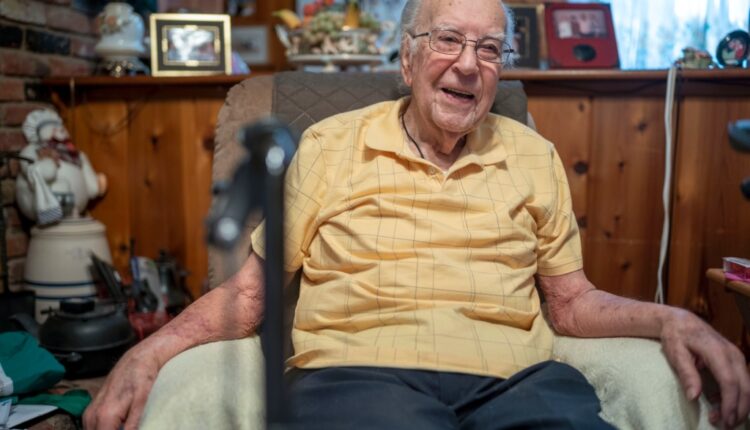 Happy 100th birthday Joe. Your kids, Neil and Becky, asked if there was any way I might mention it in the column. They’re proud of you, Joe. You’re one of a select few of the 1950s GI settlers still around – World War II veterans who came home from the service and settled in the San Fernando Valley when orange groves outnumbered homes.

You moved your family into a new development on a cul-de-sac in Sepulveda (now North Hills) with your wife, Peggy, whom you met at a USO dance and married (eloped with) a few months before you shipped out in 1942 .

The marriage didn’t last long — only 76 years. Your kids know how much you miss her since she passed away in 2019 at 95. You two were inseparable, and great parents, they say. Peggy worked as a bookkeeper in the airplane parts business you had just started in Burbank.

It was a tough go, but you always had your priorities right. A paycheck was important, but not as important as time with your kids. They came first. Peggy was there at breakfast every morning to send them off to school before going to work, and she was waiting for them every afternoon when they got home.

On Sunday, you all jumped into the family Ford station wagon and went for a ride through the beautiful, wide open spaces of the west end of the Valley – cowboy country you called it.

Sometimes the ride was only to get an ice cream cone, but the important thing was you did it as a family. When Becky told me what you did in 1958 for Neil, when he was six, I thought that’s the story of every father with a son who loves baseball wants to read.

The story of a dad who goes out and builds a baseball field with his own hands so his son can play Little League. I’ll let you tell it, Joe.

“When we moved to the Valley, Neil wanted to play Little League, so I took him down one Saturday to sign up. It turned out we lived a few blocks outside the boundaries for the league, so they wouldn’t take him.

“I asked the guy in charge where the Little League field for our area was located, and he told me there wasn’t one. He suggested I call Little League headquarters, and see if it was okay to form a league in my area. So, I did, and they said sure, go ahead.

“The contractor for our housing development was a nice, old guy. He said he had a piece of property just off Woodley, across from the Sepulveda VA, that I could use, but I had to give it back if he needed it.

“I’d work during the day and get home while it was still light to pull weeds, level out the dirt, seed and water the outfield. I rented a post hole digger to drill down and put a fence around the field with the help of a friend, Al Krause, who also had a son who wanted to play ball. Then, we built a snack stand, and opened for business.

“Finding the kids to play was the least of our problems,” Joe says. “It was the ’50s, there were kids everywhere playing baseball and dodge ball in the streets. We didn’t have to put up flyers or do anything. They just started showing up with their fathers in tow to sign them up.

“Within a few weeks, we had enough boys for an eight-team league. I managed Neil’s team, the Athletics, and Al managed his son’s team. We had two great seasons until the guy who built my house called and said he needed the property back.

“Fortunately, he had another piece of vacant land not too far away. It had been ear marked for the 118 Freeway, but he said we could use it until construction began (1968). By then, I had a lot of fathers wanting to help build that field.

“About the same time, my daughter says to me one day, ‘how come you do all this baseball stuff for Neil and nothing for me?’ She was right. I hadn’t been thinking of my daughter.

“I found some empty fields behind an office building near Balboa and the railroad tracks, and built a softball field for her. Word spread, and pretty soon we had enough girls to form a league. I coached both my son and my daughters teams.

“All I was doing in those days was building baseball fields.”

Not all, Joe. What you were doing was building a relationship with your kids that most parents would die for – a relationship that had them 60 years later asking a guy writing a column for the local paper if he would just mention that their father, Joe Romero, was turning 100